James T. Craig, retired merchant, Bentonville, Arkansas, was born in Rhea County, Tennessee, December 22, 1818, and is one of the oldest and most respected citizens of the county. He is the son of Samuel and Jane (Henderson) Craig, natives of Pennsylvania and North Carolina, respectively, the former born in 1781 and the latter in 1790. They were married in North Carolina, whither the father had immigrated when a young man, and after marriage they moved to Rhea County, Tennessee. Here the mother died in 1827. The father moved to Cane Hill, Washington Co., Ark., in 1848, and there died two years later. He followed the occupation of a farmer, and was also a teacher by profession. He was the father of only two children who lived to be grown.

Samuel Craig’s father was a native of Scotland, and after coming to the United States settled in Pennsylvania. He was a soldier in the Revolutionary War.

James T. Craig was only eight years old when his mother died, and at that age was taken by one of the neighbors, with whom he lived for a few years, and did what work a small boy could do on a farm. At the age of 15 he began working at the tailor’s trade in Pikesville, Tennessee, where he remained one year. He then worked in a store for some time, and in 1838 went to Lynchburg, Alabama, where he resumed clerking.

He worked for James Lyle, and in a letter of commendation written by the latter, dated Lynchburg, De Kalb County, Alabama, February 11, 1838, are the following words:  "With the bearer, James T. Craig, I have been acquainted with more than twelve months, the greater part of which time he has done business in my store. As a young man of honest principle, virtuous, and business habits and amiable disposition, he is surpassed by none and equalled by few. I, therefore confidently commend him as a salesman and clerk to any who wish to employ a person in the above line of business. (signed) James Lyle."

Immediately after the above was written Mr. Craig went to Fort Smith, Ark., and clerked there for one year, but his permanent location was at Fort Gibson, where he acted as a salesman for a year. The following year he purchased a stock of goods and began merchandising on his own responsibility.

In 1846 he married Miss Samantha Reagan, who was born in Tennessee in 1827, and who died in 1848. The same year Mr. Craig moved his stock of goods to Cane Hill, Ark. In April, 1850, he disposed of his goods and with the determination of obtaining his share of the hidden wealth in California [in the great Gold Rush], turned his face westward, and after a long, perilous journey over the vast plains that stretched between, reached that State. 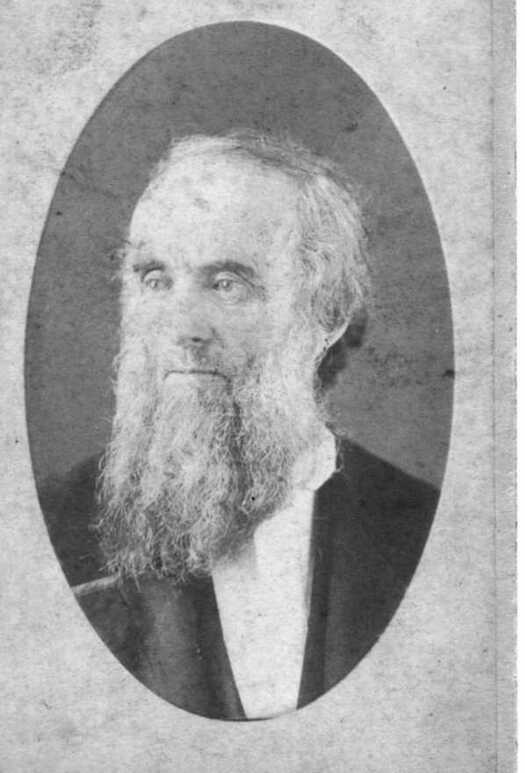 Am image of James T. Craig in his later years
​He remained in the mining regions from August until May of the following year, and not meeting with very good success he returned via the Isthmus, and resumed his former business in Cincinnati, Ark. June 12, 1851, he married Miss Elizabeth A. Russell, a native of Rhea County, Tennessee, born August 20, 1830. To them were born three children: Charles R., Edward A. and George M.

Charles R. was born in 1854, and is in the real estate business at Bentonville; is also engaged in the mercantile establishment of Craig & Sons. March 27, 1876, he married Miss Lottie Redding on the anniversary of her twentieth birthday, and to them have been born five children: James R. Carrie M., Eddie M., Ethel and an infant daughter [Annie].

Edward A. Craig was born in Bentonville, Ark., in 1860, and is a member of the firm of James T. Craig & Sons. January 14, 1884, he married Miss Wincie McDaniel, who bore him two children: Bessie and John.

In February, 1852, James T. Craig became a resident of Bentonville, Ark., and engaged in merchandising, continuing the same until the breaking out of the late war. He then returned to Cane Hill and engaged in farming, which occupation he continued until 1871, when he again returned to Bentonville and resumed merchandising. In 1882 he turned his business over to his sons. Mr. Craig is now seventy years of age, and lives a quiet, retired life.

During his active life he lived and acted the characteristics set forth by his employer, James Lyle, in his commendation. Mr. Craig is the oldest merchant in Bentonville, and he has met with good success. He erected the first two-story houses ever built in Bentonville. He is Democratic in his political views, and he and his wife are members of the Cumberland Presbyterian Church.

Mr. Craig passed away March 23, 1895 in Bentonville. He was put to rest in the Bentonville Cemetery.


Adapted from a biography written by James R. Craig Jr, in 1888  which was published in "History of Benton County, Arkansas."