Harvey Lamar Cross was the editor and proprietor of the Bentonville Sun, starting the paper in 1891. He made his influence bear fruit as a citizen of the state and an editor of a strong daily and weekly newspaper. For many years, he did admirable work along fraternal lines in the ranks of the Ancient Order of United Workmen as the grand recorder of Arkansas and as editor of the official paper of the order, only resigning these responsibilities when the office of recorder was ordered removed to Little Rock.

He was born March 6, 1852, in Caldwell County, near Cameron, Missouri. He was the son of William H. and Fannie (Johnson) Cross, a family of Irish decent. He was reared to the invigorating discipline of the family farm. He finished his rudimentary education by a course in the Smith Academy in Cameron in which he graduated as a member of the class of 1870.

​On the 25th of September , 1870, Mr. Cross was united in marriage to Miss Ellis Ann Rinaman, a daughter of Isaiah and Isabelle (Lloyd) Rinaman.  Mr. and Mrs. Cross became the parents of children as follows: Don Cross, a newspaperman in Springfield, Missouri who married Miss Mary Peel: Zillah Z. the wife of Frank W. Peel, of Fayetteville: Victor I was a hardware merchant in Grove, Oklahoma, and he married Susie Bohart. The above children were all born on the same day of the month, the 29th being the lucky birthday of the family. 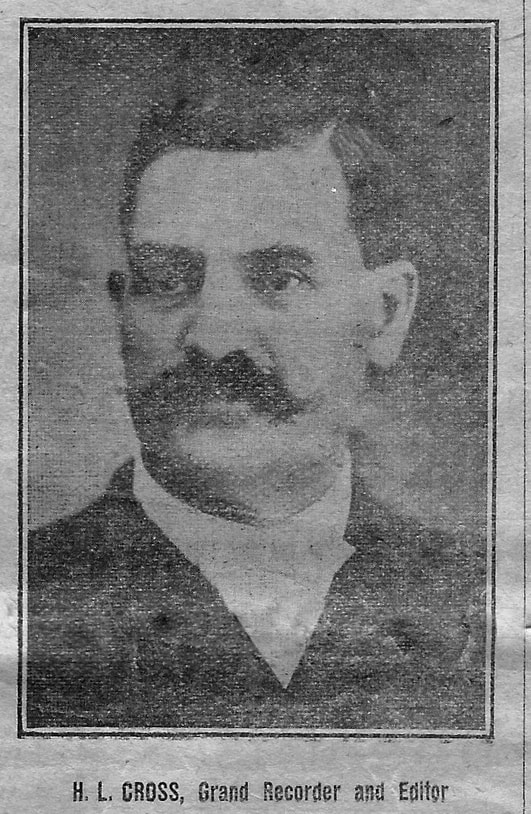 ​Harvey Cross initiated his independent business career as a teacher in the public school of Cameron, Missouri. He first started his newspaper career with a paper called the Winston Independent founded in Winston, Missouri. In 1887, he published the Daily and Weekly Sun in Cameron, Missouri. In 1891, he moved to Bentonville, Arkansas. In this city he founded the Bentonville Sun, a weekly paper to which he gave some of the best years of his life. At the time, the Bentonville Sun was conducted on a high plane of business integrity, guided by liberal policy that it impart character and tone to the community in which it operated. Reading the old Sun newspaper, the standard was set by Mr. Cross’s own beliefs that time. He was also very intolerant of what we would call fake news when another publication printed something incorrectly about the Benton County area.

The Sun office at that time had the most up to date building and printing equipment. The Sun was larger than our newspapers today with a five column quarto and was issued weekly. It had a circulation of 2,500, largely throughout Benton County. In the 1890s, you could receive the newspaper for a dollar a year, versus a dollar a day now.

In 1893, he began the publication of a fraternal journal, the A. O. U. W. Guide, the official organ of the Ancient Order of Workmen in Arkansas. He became a valued and appreciated member of this order in 1891, as a charter member of the Bentonville Lodge, of which he was master workman for a number of years. He ever manifested a deep interest in the purpose of the order and was chosen grand recorder of the Grand Lodge of the state in 1896, He remained in that position for 14 years until that office was moved to the state capital.

Mr. Cross was a deacon in the Christian Church at Bentonville. He was affiliated with the time honored Masonic fraternity, with the Independent Order of Odd Fellows and Knights of Pythias, in each of which he has had an active part.

By the 1920s, Mr. Cross had moved to Little Rock, Arkansas. He passed away in Fayetteville, Arkansas, December 3, 1929. He is buried in the Bentonville Cemetery.

Adapted from the Historical Review of Arkansas by Fay Hempstead  (1911)