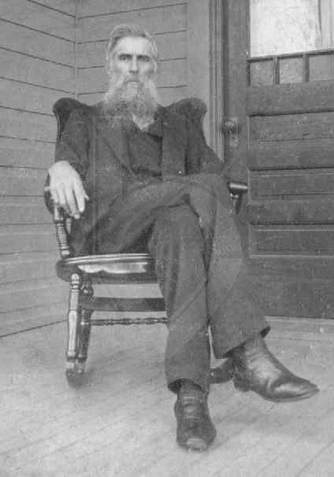 ​Goldsmith Chandler Davis was a prominent nurseryman and fruit grower of Osage Township, Benton County, Arkansas. He was born in the "Hoosier" State in 1844 and was a son of Benjamin F. and Ruth J. (Chandler) Davis, who were of Welsh and Irish-English descent, respectively. The father was born in Ohio in 1820 and was married in his native state. After residing alternately in Ohio and Indiana until 1853, he moved to St. Paul, Minnesota, where he was engaged in merchandising for one year. The next eleven years he kept hotel in Scott County, and was also engaged in farming and running a lime kiln, supplying the city of St. Paul with its lime for several years. In 1867 he became a citizen of  Bentonville, Arkansas, where he kept a hotel and was also postmaster for about eight years. In 1878, he moved to Los Angeles County, California, and was engaged in raising oranges, grapes and small fruits. His wife was born in Ohio in 1830, and was a descendant of Oliver Goldsmith, the poet. She was the mother of five children: Goldsmith C.; Phoebe, wife of R. C. Brown; Rose A.; Nannie; and Benjamin F.

In 1875 he was married to Miss Sallie West, a daughter of A. A. West, of Carroll County, Ark. She was born in Alabama in 1856 and was the mother of five children: Betsey Trotwood, Benjamin Franklin, Catherine, Lou Duskey and John Chandler.

Goldsmith gradually increased his stock until the cold winter of 1880-1881, when all of his trees were killed. He immediately set to work with renewed energy and purchased eighty acres of land where his house stood, and, without paying a dollar down, began setting out trees. At that time he had the largest nursery in the county, if not the state, and was the owner of 640 acres of good land. His orchard consisted of 20,000 trees, and his nursery stock comprised 1,000,000 trees (many of which were probably the Ben Davis variety) from one to four years old. His farm was situated two miles southeast of Bentonville in the 1880s. He did a highly satisfactory business, and his trees were shipped to nearly every state in the Union.

Goldsmith passed away on June 27, 1933, and is buried in the Bentonville Cemetery.

Adapted from Goodspeed – History of Benton County 1889
Home where Goldsmith Chandler Davis and Sallie West
Davis raised their children. This house was built in 1912.
It had 12 rooms and was built at a cost of $8000.
Photo is courtesy of Sharren Formby