A Trip To Devil's Eyebrow

A Trip To Devil's Eyebrow -  By Lanette Tillman  - Pea Ridge Graphic, December 10, 1970
Devil's Eyebrow . . . tantalizing, picturesque words. Words that stop way too short in description. Because I went to Devil's Eyebrow. And I came out feeling that I had scrambled over his whole anatomy.

It all begins at Hobo Springs where 30-some years ago, Hobos would camp, a break in their occupation of following the rails. My husband, small son and I started down the railroad in front of the old Virge Hurd place.

About one-half mile later, we dropped off the tracks and under the fence. This was shortly after 10 a.m. We raked leaves out of the spring for a picture. When we stopped again about 3 p.m., the wind had filled it with leaves and more. Many memories were no doubt buried in leaves and water; did hills and trees feel memories stirred once more as a little boy stirred Hobo Springs with a stick? 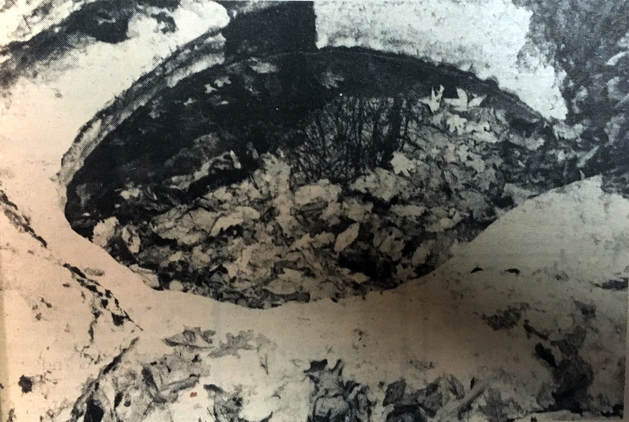 I went to Devil's Eyebrow, what for to do? I descended to the bottom and counted 10 minature waterfalls, ranging from two to 15 feet high, before I got a third of the way down.

I washed my hands in the Devil's Washpan, a basin of clear water, with sides and bottom smooth as if finished with a mason's trowell.

I knocked lightly on the door of a hollow tree, but no one answered. Though I saw no wild animals, I could sense denizens of the forest watching my journey. I looked, touched, absorbed, and compared. There are oddities and contrasts, there is wildness and gentleness in Devil's Eyebrow. 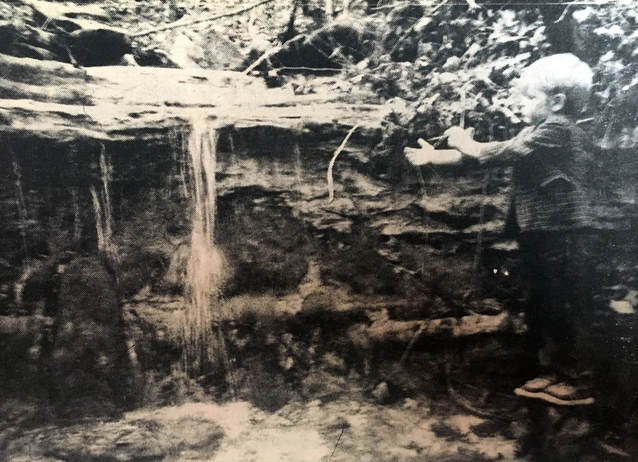 And I came back, still without learning how it got its name.

I went to Devil's Eyebrow, what for to see? I saw a hillside so steep, surely you need a short leg to traverse it. But 30 to 35 years ago, "Coon" Dean took a horse and plow and terraced the hillside for a raspberry patch. Now though, we saw few berry vines; there were rich green ferns growing in row after row, following the terrace ridges. After such a passage of time and elements, the work of man was outlined by the work of nature.

I went to Devil's Eyebrow, where for to walk? In the steep places, the flat places, the wide the narrow, the wet, and the dry places. I needed four hands and six feet, but got by with what I had. I got both feet wet, one at a time. I walked over, around and under logs. I zig-zagged the creek countless times. I climbed, by-passed, jumped, and rolled on rocks. I walked under a bluff so tall, in effect it seemed to support the sky. I climbed a 40-foot cliff and was only a quarter of the way up the hill. 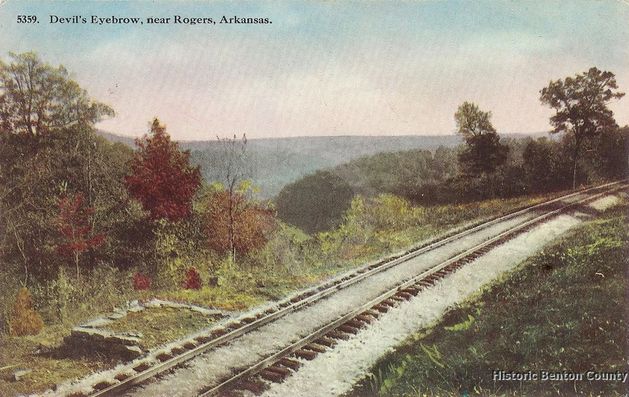 At a low guess, I walked about ten miles, with my four-year-old son following in my footsteps. A sturdy little boy that needed hardly any help from his parents, and declared at the end, "I'se not tawred." Actually he was pooped.

I went to Devil's Eyebrow and it moved me, in a way that was  different from other places I'd seen. For somehow I could see beyond that was before me. Devil's Eyebrow is wild, woolly, rugged and lonely. Yet, beneath this rough coat is a gown of beauty and grandeur. Still beyond  this I could sense the gossamer threads of our people's heritage.

I went to Devil's Eyebrow and it changed me, unseen perhaps, this moving and changing, beneath the surface of myself

Should it come about that I never return, i am different for my going.

Today there are hiking trails at Devil's Eyebrow wilderness area. It is located just a little east of Gateway.

There is a story behind the name Devil's Eyebrow:

In 1880, when the surveyors were doing their preliminary work on the location of the Frisco Railroad, "Uncle Arch" [Archibald] Blansett with other neighbors were greatly interested in the proposed route through their neighborhood. Discussing the route with one of the railroad party he is credited with saying: “Build a railroad right through these mountains? You can’t do it, man; you can’t do it. You might as well try to build a railroad on the devil’s eyebrow as to undertake to build one in such a place.” (This story was shared by Erwin Funk)

The railroad men thought his description of the area was perfect. The name stuck and is even referenced in Frisco literature.