​John Alvin Dickson was a farmer and nurseryman operating three miles southeast of Bentonville. He was a native of Benton County, Arkansas, born in 1854, and was the son of James A. and Mary A. (Wood) Dickson, and grandson of Maj. John B. Dickson, who immigrated to Madison County, Arkansas, about 1830, and two years later moved to Benton County, of the same state: where he was county clerk, ex-officio recorder of Benton County, and a member of the State Legislature. He was in the War of 1812, was in the Battle of New Orleans, and was shot in the leg. He was one of the first settlers of Benton County. About 1851, he moved to the Lone Star State, and there died in 1879 at the age of eighty-four. His son James A. was born in Bedford County, Tennessee, in 1819, and was a boy when his parents moved to Benton County. In June 1844, he married Miss Mary A. Woods, who was born in Marshall County, Tennessee, in 1820, and was the daughter of Samuel Woods. She was the mother of five children. After their marriage they located four miles southeast of Bentonville, and in 1846 moved to Osage Springs and from there to Bentonville in 1849. Here he followed merchandising until 1866, when he moved three and a half miles southeast of Bentonville.

J. Alvin Dickson was educated in Bentonville and later served two years in the Civil War. He was in Company G, Second Arkansas Cavalry, and was in the fight at Mark’s Mill,  Jenkin’s Mill, Pine Bluff, and in numerous skirmishes. After the war he was in a drugstore in Bentonville, Arkansas, and in 1877 he married Miss Lillie Woolsey, daughter of Henry B. Woolsey, a native of Benton County, born in 1860. This union was blessed with five children.

Mr. Dickson was the owner of 200 acres of land on which he located directly after his marriage. In 1881, he became a partner with his father-in-law in the nursery business. He was a Democrat in politics and was a member of the Cumberland Presbyterian Church. He died in Rogers on March 15, 1910, and was buried in the Bentonville Cemetery. 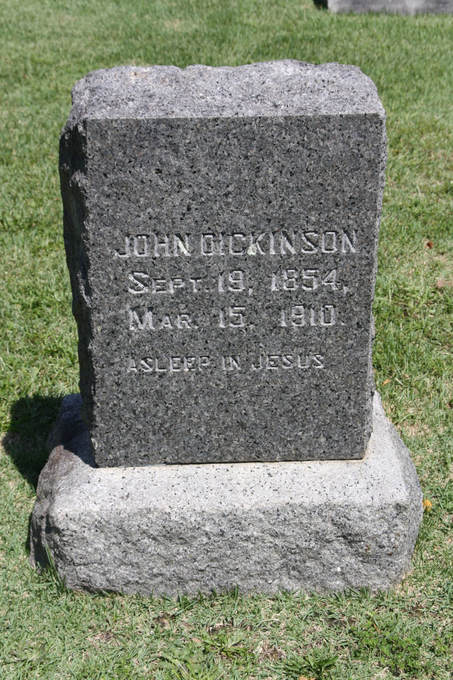