​Joseph S. "Uncle Joe" Dickson was a farmer, of Bentonville, born June 20, 1839, in Benton County, Arkansas, three-fourths of a mile from where he lived fifty years later. He was the son of Joseph and Mary (Hare) Dickson, and grandson of Robert Dickson who was a native of Lincoln County, North Carolina, born in 1772. Robert moved to Rutherford County, Tennessee, about 1826, from there to Carroll County, W. Tennessee, in 1831, and later to Northwest Arkansas, where he purchased land and resided where Bentonville now stands. He was not very well pleased with the country, and accordingly the following year returned to Carroll County, Tennessee, but in 1835 again came to Arkansas and here passed his last days, dying from consumption on February 5, 1849. Robert was one of the first white men to make a permanent settlement in Northwest Arkansas. He lived in Benton County several years before the county was organized, and even before the State was admitted.

Joseph [the father] was born February 9, 1797, and was brought by his parents to Rutherford County, Tennessee, when a mere boy, and moved with them to Carroll County, Tennessee, in 1826, and to Arkansas in 1831. He settled near his father, and owned a portion of the land where Bentonville now stands, or the first addition of the town. He was one of the active spirits who assisted in the organization of the county, and was one of the first settlers. May 30, 1821, he married Mary Hare, who was born in North Carolina April 8, 1805, and died in 1867. She was the mother of eleven children.

Joseph S. attained his growth on a farm, and August, 1862, he was enlisted in Capt. Jefferson’s company, Arkansas Cavalry, and in three weeks was transferred to Company F, Thirty-Fourth Regiment Arkansas Infantry. He was in the fights at Saline, Little Rock, Helena, and surrendered at Fort Smith June 1865. November 7, 1868, he married Miss Sarah C. Pickens, a native of Tennessee, born September 9, 1846, and this union resulted in the birth of six children. Mrs. Sarah Dickson died April 10, 1884, and in July of the same year Mr. Dickson married Miss Nancy A. Gould, a daughter of John and Jane Gould.

Mr. Dickson was the owner of 160 acres of land and also had a general store at Brightwater. He was a Democrat in politics, and he and his wife were members of the Cumberland Presbyterian Church. He died at his home on December 20, 1909, and is buried in the Bentonville Cemetery.
​
Adapted from Goodspeed – History of Benton County   1889 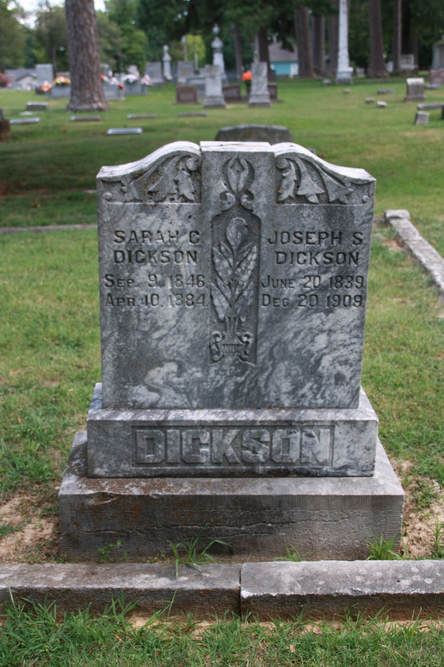