Robert Dickson - Who was a native of Lincoln County, North Carolina, born 1773. Robert moved to Rutherford County, Tennessee, about 1826, from there to Carroll County, W. Tennessee, 1831, and later to Northwest Arkansas, where he purchased land and resided where Bentonville now stands. He was very pleased with the country, and accordingly the following year returned to Carroll County, Tennessee, but in 1835 again came to Arkansas and here passed his last days, dying from consumption on February 5, 1849. He was buried in the old Dickson Cemetery. He was one of the founders of the Cumberland Presbyterian Church in Bentonville, and was a ruling elder in the church. In the old Presbyterian Church there was a lovely  stained glass window in memory of his love and devotion to the church. window He was one of the first white men to make a permanent settlement in Northwest Arkansas. He lived in Benton County several years before the county was organized, and even before the State was admitted , the entire country being then in its infancy. Robert Dickson and Esther Moore were married March 23, 1796, and they had 11 children together. 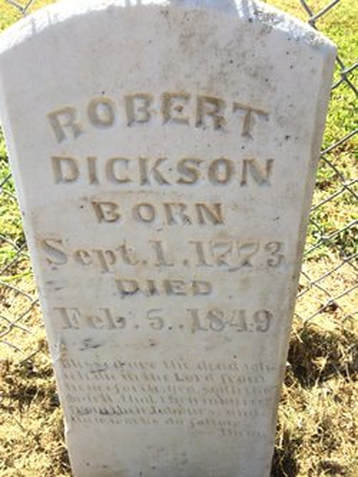