Dinosaur Park In This  Area

Dinosaur Park In This Area By Faune Conner - Travel Writer for Dept. of Parks and Tourism
Published in the Cave Springs Scene - Now the Northwest Arkansas Democrat Gazette - June 22, 1972
If you're ever driving along the Beaver Dam access road ten miles west of Eureka Springs just off scenic Highway U.S. 62, don't be surprised (or alarmed) if you suddenly see gigantic prehistoric monsters glaring at you from the wooded hillsides. These frightful beasts are only part of the large, unusual menagerie in Farwell Dinosaur Park.

Created five years ago [in 1967] as the brainchild of noted sculptor and paleontologist Emmet Sullivan, land for the 60-acre park was provided by Ola and Maye Farwell, long time Arkansas residents who wanted to build something for children. However, judging from the park's tremendous success, it seems adults enjoy the extraordinary park as much as the children, especially since much about the history of the earth millions of years ago can be learned by viewing these colossal creatures.
​
The park is open year 'round from 7 a.m. to 7 p.m. with admission only $1.00 for adults and 50 cents for children over six. Special group rates are available and this "off the beaten path" attraction is sure to provide hours of unmatched entertainment.

Visitors get their first glimpse of surprises to come when they enter the park and are greeted by two large green "baby" dinosaurs and a rugged, growling caveman standing in the parking lot to welcome those brave souls daring to enter the wilds of Farwell's Kingdom. Tickets may be purchased in the park's large restaurant and gift shop, and explorers are then sent off on their two mile journey either by foot or by car.

Walking along the beginning trail, visitors will notice the outstanding rock collections that line the sides of the path. These rocks are from all across the United States and are the favorite hobby of Mr. Farwell who is currently building a large, authentic replica of the moon to eventually house the rock collection and other exceptional exhibits. Observant visitors touring the park will also be pleased to pick up any of the numerous fossils they may find along the paths and roads.

Children will delight in recognizing many of their favorite animals along the trail such as lifelike deer, rabbits, mongooses, skunks, squirrels and a kangaroo. Monkeys are busy climbing one tree near the path while a fearsome, 25-foot boa constrictor menacingly curls throughout the branches of another. The huge snake is actually a stout grapevine ingeniously painted yellow with large orange spots to transform it into a slithering reptile.

In a clearing along the trail stands a huge, ferocious brown bear which has the added distinction of serving as a home for a hive of honey bees. During the warm summer days they can be seen flying in and out of the big bear's mouth. An old-fashioned playground, including bag swings and tree houses, surround the bear, along with redwood swings and picnic tables for those who like to bring supper or lunch with them. A suspicious looking prehistoric cat boasting a seven-foot tail stands guard from its lofty perch in a tree while a buffalo and two cavemen cautiously eye visitors from the edge of the clearing.

Those who become dizzy easily should perhaps avoid the next feature of the park, the creaking, wooden, swinging bridge which hovers high above Cedar Creek and a beautiful waterfall. On the the other side of the bridge is the area where most of the prehistoric monsters can be found and visitors will enjoy bringing their cameras along to capture unusual striking pictures in the park. 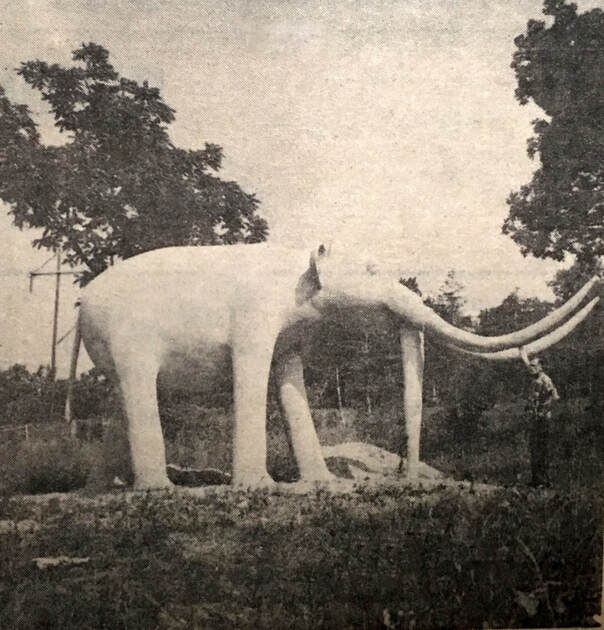 A Mastadon .  .  .  .  . a pre-historic elephant, is one of the many pre-historic animals found in the park near Beaver Dam.
Serenely still, Dinosaur Park Lake lies in the center of the park valley and a charming little pavillion reached by swinging bridges stands in the middle of the lake. Youngsters will enjoy feeding the thousands of trout that swarm around the pavillion with food dispensed from a small machine there.

Impressive Tyrannosaurus Rex stand by the edge of the lake holding a large fish between his six inch, serrated teeth. He stands 22 feet high, is 58 feet long and lived over 97 million years ago. Called the "King of the Tyrants", he probably was the most destructive dinosaur that ever lived.

Rex's nearby friends include a saber-toothed tiger, a Palaeoscincus which resembles a mammoth turtle and a Protoceratops, the most recent dinosaur that has been discovered. The Protoceratops and two nests of fossilized eggs were found in the Gobi Desert in Mongolia in 1923, and the prehistoric creature looks much like a parrot and rhinoceros combination. Climbing out of the lake is also another giant dinosaur and an ominous octopus with a 32-foot tentacle spread. 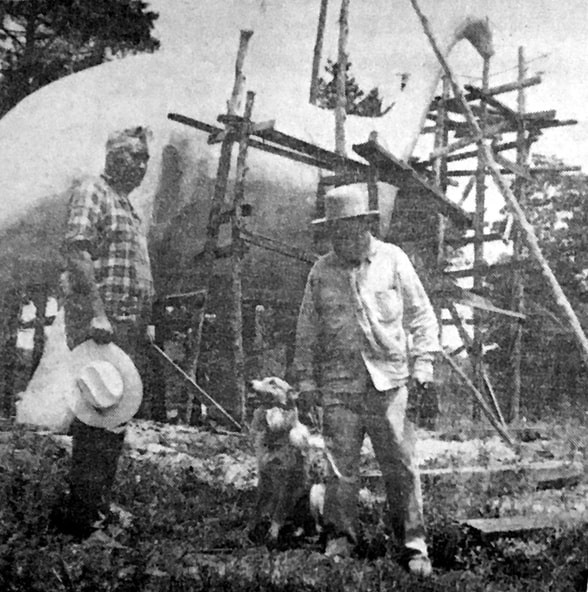 Prehistoric Animals in the Ozarks .  .  .  .  . with the 55 foot long Brontosaurus in the background, Ola Farwell, who had the dinosaur park built, confers with the famous sculptor, Emmet Sullivan, who designed the pre-historic animals for it.
Up among the hillsides placed in natural settings as if they had always been there, are a three-horned Triceratops, a club-tailed Unitarium, an armored Stegosaurus and a monstrous duck-billed Trachodon. Children in the park readily identify with the 40-ton Brontosaurus which is perhaps the original and best known dinosaur. Brontosaurus' most celebrated family member is the famed Dino, caveman Fred Flintstone's lovable pet.

The list of Farwell's Zoo goes on and on - a 30 foot high crested lizard, a prehistorical camel and horse, an ancient alligator and hog, a sail lizard, a gigantic mastodon with 11-foot tusks, plus many, many more.

All of the creatures in the park are scale size figures and are carefully made by a team of experts in their fields. In the world's only dinosaur factory across the road from the park, Engineer J. O. Parker skillfully shapes the reinforced armature or skeleton of the creatures out of steel rods and covers them with metal laths. The masonary work on the dinosaurs is then put on in the form of several layers of cement by A. C. McBride and finally, artists Bill and Gary Armer paint the monsters in realistic colors. 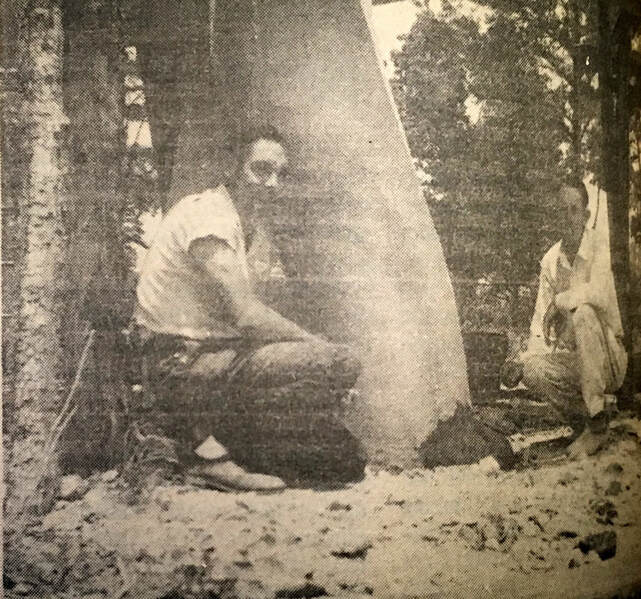 Mighty Leg of a Brontosaurus .  .  .  .  .  . Here Orvis Parker of Bush, left, and A. C. McBride, of Eureka Springs, fashion the concrete toes of this gigantic dinosaur. The mighty leg is re-enforced with well-braced framing, but the toes are added as the huge concrete creature takes on a more realistic appearance.
The dinosaur team works all year long designing and building new creations and future plans now call for an elaborate replica of Noah's Ark, complete with all of the animal pairs. When finished, the Ark will be perched high on a mountainside in the park and will be reached by cable cars. An excursion boat ride is also being planned for the park, along with a  display of real dinosaur bones.

For campers, Mr. Farwell has installed as excellent camping area across the road from the park including hookups, showers, and a laundromat.

Fishermen will be pleased to note that Dinosaur Park is only a quarter of a mile from Beaver Dam where the trout fishing is terrific, and the headwaters of Table Rock Lake are only a few miles further.

In Eureka Springs, there are an endless variety of art galleries, museums, and craft shops to see, plus the well known Biblical Passion Play presented May 26 to October 28. Shoppers will also enjoy the gift shop in the Dinosaur Park which features many handmade crafts, sculptures, leather items, and homemade jellies and jams.

Farwell's Dinosaur Park in the heart of the Ozarks is truly a different place to visit and offers exceptional entertainment any time of the year. The outstanding park not only has takes visitors back in history, but back before history to the fascinating and incredible age of monsters.

In the late 1970s, the park was sold to Ken Childs and the name was changed to "John Agar's Land of Kong" with a 40 feet tall statue of King Kong being constructed. It was known as the "World's Largest King Kong". The owner was a friend  of John Agar who appeared in the 1976 version of King Kong. At one time it was known as the world's largest dinosaur park with over 100 dinosaurs featured.

The park operated until 2005 when it closed. On August 3, 2011, a fire destroyed the park’s main building. The fire was suspected to be arson.