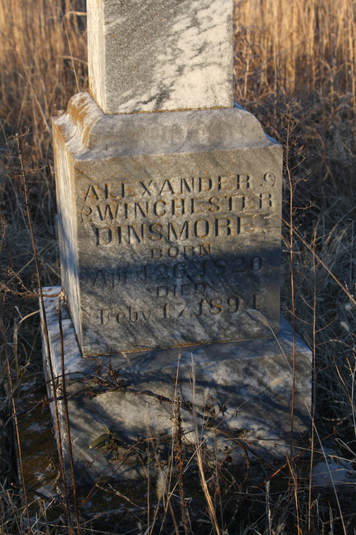 Alexander Winchester Dinsmore owned one of five general stores in Bentonville in the 1860s. He was born on April 24, 1820, in Washington County, Pennsylvania.  He was of Scotch parentage, and inherited many of the noblest traits which characterize that nationality. He graduated from Washington - Jefferson College in 1838. After graduation he went to West Virginia. He taught about 11 years in West Virginia and Kentucky, but in 1847 came to Arkansas, first moving to Fayetteville, then coming to Bentonville. On April 22, 1947, he married Miss Katherine Anderson, the daughter of Col. Hugh A. Anderson. At that time they returned to Kentucky. In 1849, the family returned to Arkansas and located in Cave Springs, where he  built the first cotton gin in Northwest Arkansas. In Cave Springs, Hugh and James H. Dinsmore were born. He then moved to Bentonville and opened a mercantile house. The Dinsmores had three more children after moving to Bentonville.

His political activities began early. He is said to have supported the overthrow of the “Johnson Dynasty” just before the Civil War. The so-called dynasty was a group of families  -- Conways, Rectors, Sevier and Johnsons – who dominated politics until the Civil War.

He represented Benton County at the 1860 state convention to consider the issue of secession. He supported the Union, and was one of the last conventioneers to support the split. He moved to Texas during the war to avoid the fighting. His home was burned several days after he left for Texas. His military service consisted of work in a commissary department while in Texas.

After the war was over, Mr. Dinsmore returned to Bentonville and rebuilt his home and business. Mr. Dinsmore was described as an “enterprising” successful businessman. For a quite a few years he served as president of People's Bank in Bentonville. He held that position when the bank was robbed by Henry Starr in 1893. He was a man of high integrity and was always working for the betterment of the community.

He played a prominent role in establishing the Presbyterian Church in Bentonville, and was a ruling elder since the church was organized in 1853.

Dismore was appointed to the University of Arkansas Board of Trustees, for which he is said to have worked tirelessly. During his years of service, Old Main was built, the first permanent building constructed on campus. Dismore often travelled from Bentonville to Fayetteville via horseback for UA business. Following one of these trips – while convalescing from another illness - Dinsmore contracted pneumonia. His death on Feb 17th, 1894, was attributed to this illness. He was buried in Anderson Cemetery in Vaughn.