​Firefighters with the Bentonville and Rogers Fire Departments, and volunteer firemen from Cave Springs, Centerton and Pea Ridge Fire Departments battled the blaze until it was finally brought under control some time after noon Tuesday.

Although fire walls confined the blaze to the one building, firemen were credited with preventing the spread of the flames to neighboring business buildings. 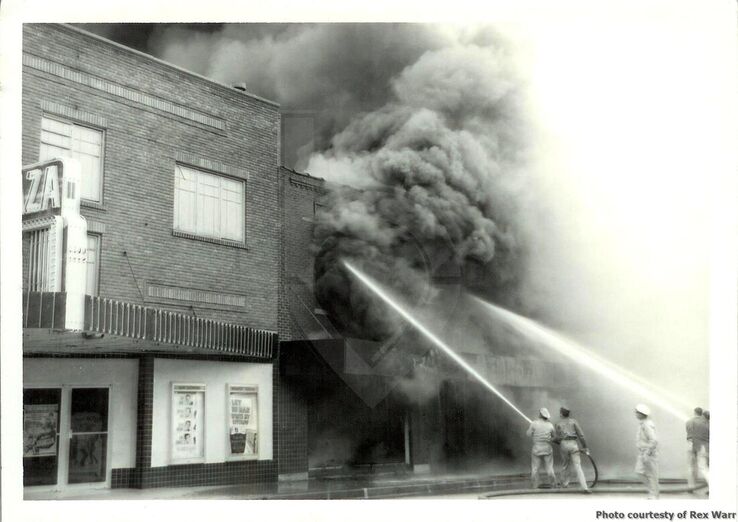 Firemen working to put out fire in McCurdy Bargain Center and Banks Grocery Store
No official estimate of the loss was made, but a spokesman for one of the local insurance agencies said that damages would probably amount to between $200,000 and $250,000.

Two fire alarms were turned in about the same time Tuesday morning at 10:30, after smoke was noticed seeping through the upper wall of the McCurdy store, which faces south on West Central St., and into the rear of Banks Grocery, facing north on West Second St. One of the alarms was called in from the grocery store, and the second by an unidentified person on West Central.

The Bentonville Fire Department sent two trucks to the scene, and firemen entered the locked McCurdy building by breaking the glass doors and display windows with fire axes.

It was only minutes before the fire became a raging inferno, and a call for help was sent to the Rogers department. Two trucks were sent from Rogers, and the Springdale Fire Department sent a truck to "stand by" at Rogers. The departments at Centerton and Pea Ridge were also put on a standby basis, although the trucks were not sent to Bentonville.

The regular firemen were aided by local volunteers, as well as city and county police officers, and two state troopers.

Both West Central and West Second Sts. in the fire area were blocked to traffic after the fire broke out, and were not opened again until Wednesday morning.

Although the origin of the blaze still has not been determined, it was the opinion of some of the firemen that it may have started on the upper floor of the McCurdy building.

The stock of goods at the McCurdy store, owned by Mr. and Mrs. Charlie McCurdy, had been sold Sunday to R. L. Dishewon of Hulbert, Okla., and were to have been removed Tuesday evening. Dishewon had taken only a small portion of the goods with him when he returned to Oklahoma Sunday.

McCurdy and Melvin Rakestraw, owner of Rakestraw's Department Store here, and City Officer John Cox had been in the McCurdy building only about 15 minutes prior to the discovery of the fire, and at the time they noticed nothing amiss.

​The flames spread quickly after the fire was discovered, and at one time blazed approximately 150 feet into the air. A series of explosions, which may possibly have been caused from bursting bottles and cans in the grocery store, and heavy black smoke billowing out of the building temporarily hampered firemen in their attempts to control the conflagration. At the height of the firefighting, however, it was estimated that the trucks were pumping 3,000 gallons of water per minute. 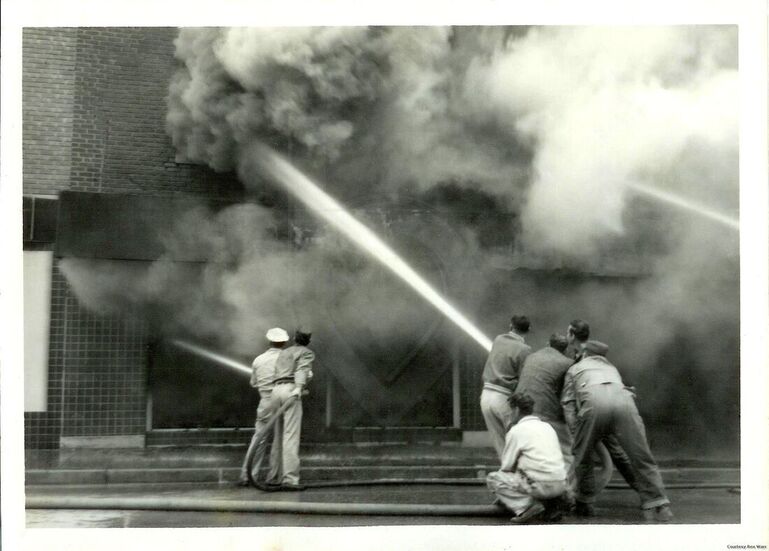 Bentonville fire 1961 -W. Central  (Photo Courtesy Rex Warr)
Owners of the adjoining firms were able to move most of their records and equipment to safety. bur nothing was saved at McCurdy's or Banks Grocery. Mrs. Craig Holt, cashier at the grocery store, was forced to leave the building so suddenly that she had no time to get her purse or coat, and the cash register also was left in the building.

Earl Davidson, owner of the Conoco Service Station and tire shop, removed a huge stock of tires from the upper floor of his station by rolling them out the window, from where they bounced to the pavement below.

Firemen continued to pour water on the smouldering ruins long after the fire was brought under control, and 12 members of the Bentonville National Guard Unit stood guard at the scene throughout Tuesday night.

Mrs. R. W. Suter, executive secretary of the Benton County Chapter of the American Red Cross, notified Red Cross headquarters in St. Louis who sent a field worker here Wednesday. Mrs. Suter said that when five or more business firms are affected by a fire such as the one Tuesday, the area would be classified as a natural disaster area and eligible for Red Cross aid.

The fire area was fenced off Wednesday morning, awaiting insurance adjustors, and a state fire inspector to complete their investigations.

It was just 40 years ago in January that a building at the same location burned, with one fireman killed by a falling brick wall. The building at that time was occupied by the W. J. Doke Motor Co. and Benton County Hardware Co.

​The fireman who lost his life in the 1921 blaze was Charles A. Masterson.