Dr. E. J. Highfill
​By Billie Jines (Cave Springs Scene 1/7/1971), used with permission
The Cave Springs doctor who served this area from the close of the Spanish-American War to the end of World War II was the late Dr. E. J. Highfill, father of a present-day resident, Mrs Reba Oakley.

About five years before the death of the doctor in 1955, it was my privilege to interview him for a newspaper feature. The "Dr. Highfill Story" as I heard it that day in 1951 went like this:

The 78-year-old doctor sat there that day facing a window that looked out over the lake and the town. At his side was a radio for his long hours of leisure. The radio-record player combination had been a gift to him from the people of his community. It was presented at a community-wide dinner held on his birthday at the Cave Springs Community Bldg.

The day I was there, a telephone at the doctor's elbow did not ring. Nor was it usually ringing like it had in the years gone by, for the doctor had reached his twilight time when he was unable to maintain the pace with which he had once moved at every beck and call.

Even then, though, with him no longer able to walk, he was still sometimes being summoned to the homes of patients. Someone would carry him to the car, drive him to the residence where he was needed, and there a member of the family would meet the car with a chair. The doctor would be placed on the chair, and some of those about him would lift the chair and carry it and the doctor to the bedside of the patient.

When I interviewed him, it had been 52 years ago that summer that he had had his first experience at ushering into the world a new Arkansan. He had just graduated from Barnes Medical College (Now Washington University) in St. Louis, Mo. The three-year medical course in 1899 was not followed by an internship. The presentation of his diploma allowed the young man to practice medicine.

Still bewildered at the realization that he could not turn to one of his professors for information, the young doctor found himself practicing in the community of Hoover, where he had been born and reared. The folks who had been his elders were now coming to him for treatment and advice. Inevitably one day one of these summoned the doctor to his home to deliver the first child of his wife, Dr. Highfill had been taught, he thought, all about obstetrics, but his knowledge had been gathered from books and lectures. That night he was to apply his information at the first birth he had ever witnessed.

"Aunt Betsy Helped."
Looking back, Dr. Highfill declared he would have died that night had it not been for the presence of an old lady, Aunt Betsy Franklin. Aunt Betsy's experience kept her from having stage fright at the scene that night. She valiantly rolled up her sleeves and encouraged the frightened young doctor with such remarks as "That's right, by George."

To that day, Dr. Highfill was one doctor that did not resent the presence of a midwife or any old lady at such time.

While at Hoover, which was near Highfill, the young doctor was married to Miss Jennie Jones, who had been his schoolmate. She became his constant companion and accompanied him on most of his calls. Shortly after the couple moved from Hoover to Osage Mills, then became parents of a daughter, Reba. Another new arrival in the home about the same time was a telephone. 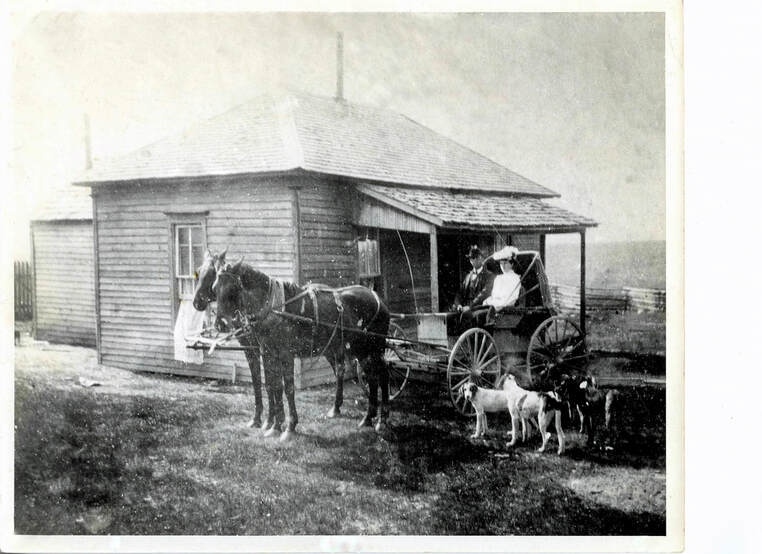 At their first home at Hoover, near Highfill,  Dr. and Mrs. E. J. Highfill are seen in their buggy which was hitched to their team, Dutch and Dade. In the foreground were doctor's foxhounds. As long as he was able to follow the hounds, the doctor continued to make fox-hunting one of his greatest pleasures. (This photo was taken in 1903.)
The seven years that the family lived at Osage brought many incidents about which the doctor and his wife often reminisced. One winter a sleet storm brought ice to the countryside which lasted for two weeks. The doctor met the transportation problem by having the wheels on his buggy replaced by runners. The improvised sleigh worked fine, until the day the ice began to melt. The warming sun found Dr. and Mrs Highfill bout eight miles from home on a call to a patient. It was mighty tough pulling for the team to make it home again.

Cold Futile Trip
That incident brought to the doctor's mind another time at Osage Mills when the drop in temperature made a night call decidedly unsolicited. One came, through, and the doctor dressed with stiff fingers and set out for the patient's house. About a half-mile from home the team became frightened while crossing a stream and when it appeared that the buggy was going to turn over, the doctor jumped into the hip-deep water. He swam out, carefully backed the team out of the stream and returned home. After building a fire to thaw out his frozen clothes, he donned dry apparel and set out again on his call. After a frosty trip, the doctor arrived at his destination only to find he could not awaken anyone in the house. Becoming colder and angrier, he road to the next house and was told the family must be asleep. The doctor returned, determined to get into the house. After rousing the family from their warm beds he was told that the patient had got easy so they just went on to bed.

When the doctor decided to relocate he chose Cave Springs for his home. His family lived in a tent while their new home was being built. The tent stood south of the spring, and his daughter still has a picture of the family near the tent. The house they built still stands a little south of where the tent stood. It is the big house just east of Mrs. Oakley's, both of which overlook the beautiful lake below. 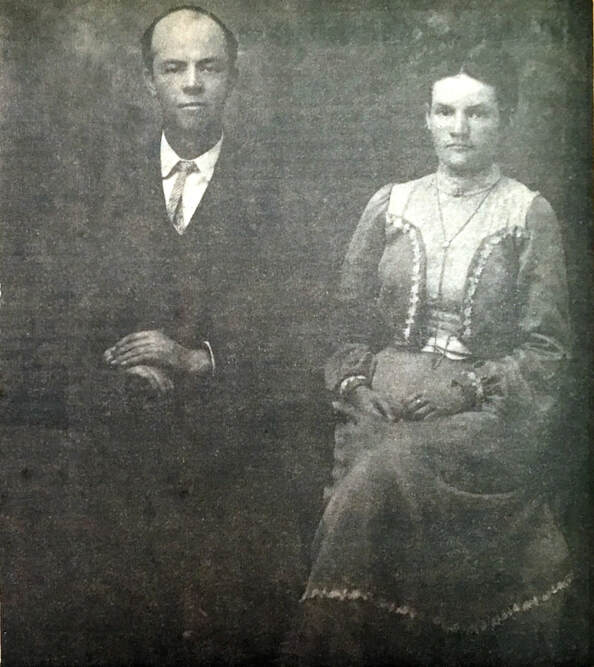 Dr. and Mrs. Elisha J. Highfill  ... As they posed at their wedding shortly after turn of the century
The doctor set up an office in the building which then housed the bank. Later, after he acquired the drug store in Cave Spring, his office was moved to quarters back of the store. There people from near and far came to seek the services and knowledge of Dr. Highfill.

Lacked Wonder Drugs
Dr. Highfill, a jovial man who liked to recall humorous incidents, had many things stored away in his memory which were not so pleasant to recall. His chief regret was that he didn't have penicillin throughout his long medical career. The doctor named patients who, he believed, would have recovered from pneumonia had he been able many years ago to draw from his medicine bag some of the miracles drug of today.

One of the most common illnesses of his earlier practice was typhoid fever. The doctor felt that his duty was not fully preformed until he had tried to determine the spring or stream of which the water was polluted. If he succeeded in finding the spot, he condemned the water for drinking purposes.

The doctor would not estimate the number of babies he had delivered in his his years of practice, but he admitted that the number ran into the thousands. He found it amusing that many people upon returning to their former homes would meet the doctor with this remark: "Oh, I remember you - You were there the night I was born."

Their daughter, Reba, is the mother of a son and a daughter, and has four grandchildren and two great-grandchildren, making the fourth generation of the doctor's descendants who survive him.

Not counting a countryside of appreciative people who still remember the service rendered by Dr. Highfill to this area. 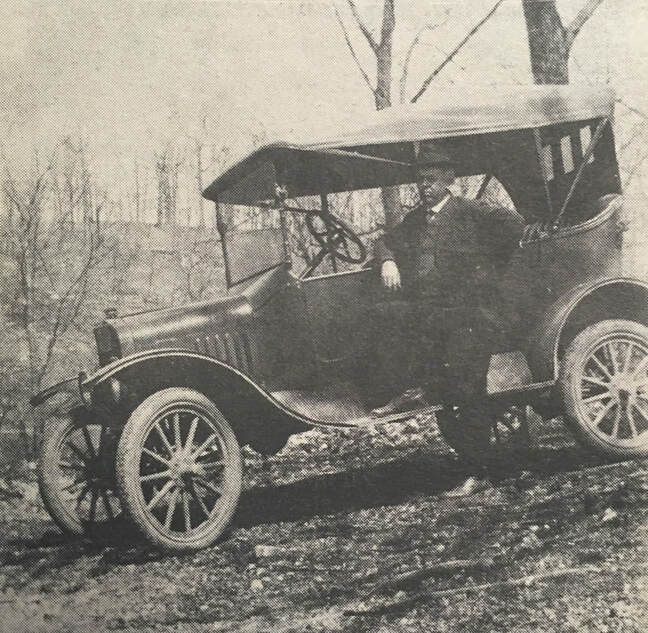