John Keith was born in 1834 and Elijah in 1935, three miles southeast of Maysville.
The first record of deaths was that of a little daughter of David Stanley (1834), four miles from War Eagle Mill, and the second, John B. Kirk, also near War Eagle.

Among the first marriages were those of John Highland and Rachael Borne (1834); James Blackburn and Sara Crabaugh; Joseph Stanley and Millie Blalock; Oliver Miller and a Miss Blalock.

In Nov. 1837 County Commissioners selected the present site for Bentonville

Also in Nov of 1837 the first store was established in Bentonville by Dr. Nichols Spring.

In Dec. 1837 the first courthouse was erected which was a small log structure located just north of the present courthouse.

In Aug 1838 was the first general election held in Benton County. After election, general brawl, the like never again recorded in county annuals.

The first case in circuit court was against Samuel Vaughn, George W. Vaughn, Abram Hamilton, Price McMurty, John Meeks and Reese Butler, for commiting a "riot". The indictment was not preserved and details of the "riot" are lacking; but the defendants were discharged.

The first trial for murder in Benton County was in the May term of court in 1841-- the prisoner, Edward Welch. A jury composed of Thomas Carle, William Hammock, Warren Wright, Daniel Mayes, John B. Walker, David McKissick, Joseph McKissick, James M. Pope, Alfred

In 1873 Bentonville was incorporated as a town. 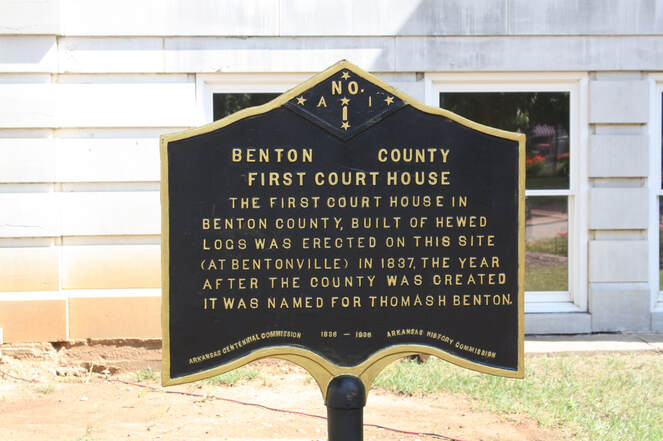