Adam Batie Was Benton County's First Resident, Bentonville The First Town
Northwest Arkansas Times, June 14, 1960
When Adam Batie settled at Batie Prairie in 1828, he was the only white man living in what is now Benton County. Then it was a part of Washington County, the Territory of Arkansas. His closest postoffice was Fayetteville at that date the only postoffice in Northwest Arkansas.

It was the spring of 1830 before Adam had any neighbors, Then John McPhail and his father settled nearby and Martin Mays settled on the present townsite of Maysville. They were followed by Judge English, Robert Cooper and Lemuel Tynnon.

It was on September 30, 1836, that Benton County was formed by an act of the first state legislature. It was named for Thomas H. Benton, senator from Missouri.

The temporary seat of the court was established at the home of George Wallace, one and one-half miles east of Bentonville. Wallace was the first County Court Judge.

Pursuant to the act creating Benton County an election was held to select a site for the county seat. Robert Cowan, Robert Weaver, and Thomas Swaggerty were elected to locate a suitable place.

After viewing many possible sites the commissioners reported to the circuit court on November 7, 1837, that they had located the county seat on the present site of Bentonville, and had selected the name Bentonville.

At high noon the commissioners met with the court, under a huge tree. From miles about eariler countains gathered. It was a serious ceremony; a descision on a momentous problem. Shortly afterward the first grand jury met.

The commissioners obtained from the goverment a patent for the townsite. They laid off the present town square. The rest of the city was divided into 166 lots. Residence lots were 165 feet square and business lots 82 1/2 feet square.

The first store in Bentonville was started by Blythe & Spring. In about a year Walker Brothers started another store with about $800 worth of goods. In two years a third store was opened.

​In 1860 there were five stores and some shops of carpenters and blacksmiths. By the time the war began some county buildings had been raised, there was a Cumberland Presbyterian Church; a Methodist Episcopal Chruch; a building which had a school room below and lodge room above; two taverns and some saloons, and two inns.

The population was near 500 and a good number of small residences had been built. The town was off the "Wire Road" which was the military road from Springfield to Fort Smith.

Brightwater was on the wire road and was established by Enoch Trott, who built the first dramshop [bar] and grocery. That ancient business house was established in 1840, or there abouts, and was known as "Trott's Stand."

The stations on that old stage line were rough places with whiskey the chief article of merchandise. Mudtown, about a mile southeast of where Lowell now stands, and Cross Hollows were two of those old places that have passed on like the stage line.

After the battle of Pea Ridge in 1862, fire broke out in Bentonville and destroyed 36 houses. It is charged that soldiers of Curtis' army set fire to the town to avenge the death of one of their men, who was killed there the night before. The county court house burned down during the fire. From time to time during the war other houses were burned by bushwackers and soldiers. Only about a dozen houses were left whole by the end of the war.

In Janurary of 1873 Bentonville was incorporated as a town. A contract was let in May 1871, to build a new court house but it was not occupied until July, 1874.

In 1872, on the site of the old grammar school, the first public school was built. It was of brick and stone, but was destroyed by fire in 1877. From then until 1882, when the new school was built, classes were held in churches. 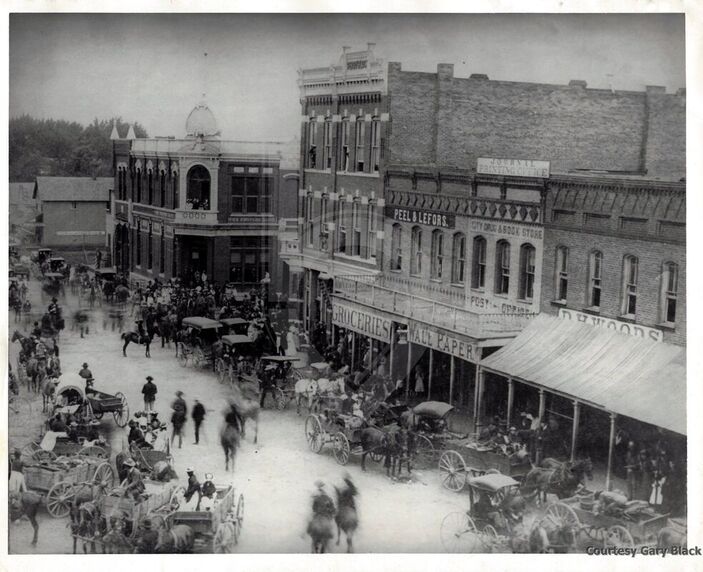 1882 Street Scene, Bentonville
In 1880 the Frisco Railroad asked for a land grant to build their railroad. Bentonville's leaders questioned why it was necessary to come through Bentonville. The railroad's reply was to build the railroad six miles away. In 1881 the town of Rogers was started near the line.

in 1882 the Bentonville railroad was built to connect with the Frisco railroad at Rogers. In 1898 it was extended to Grove, Okla.

The town of Hico was started about 1839. In 1886 the name was changed to Siloam City, then to Siloam Springs. Sulphur Springs was platted in December, 1885, and Gravette was founded in 1894. Gentry was laid out the same year. Rogers, Avoca, Garfield and Lowell were all layed out in 1881.

Several towns have started since 1895, growing rapidly for a few years, then fading out.

The first Masonic Lodge in the county was organized in Hico in 1847.

Motion pictures were shown in Rogers at a carnival in 1906, for the first time in the county.

Benton County's first, and only, candidate for president was William Hope Harvey in 1931; he ran as an independent.

A few notes from the administrator of this site: I believe Bentonville wanted the railroad to come through their town, but the railroad went the most direct and cheapest route. This article also mentioned the burning of houses as happening after the Battle of Pea Ridge when actually, according to other documatation, it was before. At a glance most of the other information looks correct.