Early Morning Fire Damages Main Block - Applegate's Drug store Heavily Damaged When Blaze Sweeps Through It
Benton County Democrat, October 4, 1945, now the NWA Democrat Gazette
Bentonville had its most disastrous commercial fire Wednesday morning, since the burning of the Benton County Hardware building in the early 1920's, when the Terry Block was badly damaged. The three-story building is at the corner of Central and Main in the heart of the business district.

​It was occupied by Applegate's Drug Store and a Snooker Parlor. The drug store having entrance on both streets. Upstairs were the law offices of Vol. T. Lindsey, Jeff R. Rice, Mayor D. W. Peel and J. C. Marquess. The third floor was used by the several Masonic bodies.

The fire was discovered in the Applegate drug store at six o'clock by Bill Bigelow, who happened to be passing. A general alarm brought the Fire Department promptly and almost immediately the second truck. The fire appeared to be centered in the northwest corner of the building. and was apparently in the basement and had eaten its way into the elevator shaft leading to the top floors.

It had made such progress that the Rogers department was called for help and sent the big pumper in charge of Jake Jacobs and his crew.

In the meantime, through stubbornly fought, the fire had broken through the roof and looked as though the entire block was doomed. Fire Chief Wright and his men were handicapped in getting at the seat of the fire because they did not have gas masks and the fumes from chemicals in the basement were overpowering. He phoned Camp Crowder for gas masks and equipment.

In 40 minutes Assistant Chief Gividen and his men Ross Wattenberger, Wade Gardner, Jesse Short and Everett Sallee were on the job. They donned masks and entered the building and reached the center of the fire, using chemicals with water.

The three companies fought the stubborn blaze for about three hours before it was subdued. Chief Gividen of Camp Crowder congratulated the firemen on being able to hold it in check as well as they did until his company arrived with the needed equipment to enter the building. 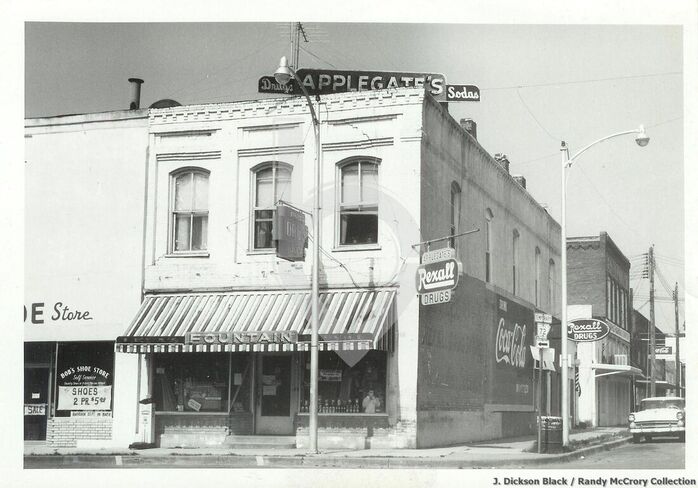 Applegate's Drug Store - Corner of Main & N. W. 2nd St.
The origin of the fire has not been determined. Three theories are advanced. The refrigeration motor in the basement. a leaking chemical container, spontaneous combustion due to recent dampness or a smouldering cirarette tossed aside and unnoticed.

Evidently the fire had been burning a long time as the night telephone operator reported the curcuit open about five o'clock.

The Applegate Drug Store of which John Applegate is the owner is the heaviest loser. He estimates his losses at not less than $15,000. The stock was ruined by either fire or water. Partially covered by insurance. The building, owned by Terry Peel , $7,500 to $8,000. Vol. T. Lindsey, law library and fixtures $1,000. Much of his office furniture was saved, though damaged in taking it out the window. Jeff R. Rice, office fixtures and law library, $650.00. D. W. Peel, office fixtures and important papers, $500.00. The Masonic Lodge $500. The Snooker Parlor was damaged some by water. Sample Store roof damaged and some water seepage, $100 to $150.

The fire was a tough initiation to J. C. Marquess, who opened an insurance office in D. W. Peel offices on Oct. 1. He saved practically all of his furniture and equipment.

Despite the $25,000 fire loss the community congratulates itself that it was no worse. For a time it looked as though the entire block was doomed and the fire companies are receiving praise for the fine fight they made against what appeared to be great odds.