Hon. Samuel N. Elliott, ex-county judge of Benton County, was a resident of Bentonville, and a native of Rutherford County, Tennessee, born where the battle of Stone River was fought, December 22, 1823. He was the son of James and Adaline (Bowman) Elliott, the former a native of Orange County, North Carolina, born in 1796, of Quaker descent, and a mill-wright, farmer, general mechanic, etc., by trade. He was a genius, and a successful business man. At the age of fourteen he left his native state and went to Rutherford County, Tennessee, where he married and where passed the remainder of his life. He died in 1841. He was a soldier in the War of 1812, and was at the battle of New Orleans. His wife, Adaline Bowman, was born in North Carolina, in 1802, and died in Murfreesboro, Tennessee, in 1885. Her father, Samuel Bowman, was a soldier in the Revolutionary War, as were also several of her uncles. She was the mother of nine children, Hon. Samuel N. Elliott being the second child.

He was educated in the country schools, at Clinton College in Smith County, Tennessee, one year, and was three years at the Transylvania University at Lexington, Kentucky, graduating from the law department of the last named institution in the spring of 1845. In 1848 he married Miss Jane K. Brack, a native of Trumbull County, Ohio. born in 1825. Six children were born to this marriage.

After his marriage Judge Elliott went to Seguin, Guadalupe Co., Texas, where he resided until the war broke out, and practiced law with success, Gov. Ireland being his opponent in many a law case. In February, 1862, Judge Elliott enlisted in Company K, Eighth Regiment Texas Infantry, and was elected third lieutenant. He was in the bombardment of Corpus Christi, Fort Esperanza and other skirmishes, remaining in service until the close of hostilities. He was judge advocate of court martial at Sabine Pass for three months, and surrendered at Pelican Spit in May, 1865. In 1866 he was in the North, and for and during the years 1867 and 1868 he was in Bryan, Texas.

In May, 1869, he became a resident of Bentonville, Arkansas, and resumed the practice of law. He was justice of the peace for several years, and in 1876 he was elected county judge, which position he held for eight years. When he first entered the office the county was $18,000 in debt, and at the end of six years Judge Elliott had paid the entire principal and interest, leaving the county out of debt, for which act the people of Benton County hold him in grateful remembrance. In 1882 Judge Elliott went to California, purchased an orange grove, and at the end of nine months traded it for a farm near Fayetteville, Washington Co., Ark.

Before the war he was an old line Whig, and in 1861 was a candidate for a seat in secession of Texas convention, but was defeated by Gov. Ireland. He was a Democrat politically, and in religion was an independent free thinker. Mrs. Elliott was a member of the old school Presbyterian Church.

Judge Elliott passed away September 28, 1911 and is buried in the Bentonville Cemetery. 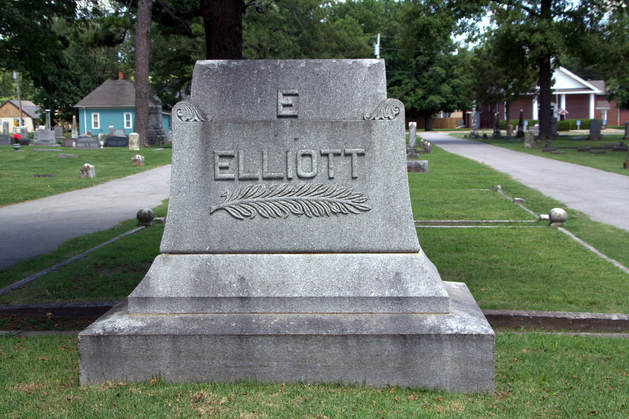