Bentonville's F. M. Hubbard Stopped Counting Dahlias at 100
By J. Dickson Black (Published 1961)​
From early July until the first frost a Bentonville, Ark., man has a rainbow in his yard.

His rainbow is created by dahlias of many colors which he began growing after retirement from the railroad five years ago.

​"I needed something with which to pass my time so I turned to flowers," said F. M. Hubbard. "I chose dahlias because they come in so many colors and they bloom longer than most flowers. "

Hubbard began his flower garden with 12 different tubers. The next spring he got catalogs from 23 plant houses and began buying one of each color and type available.

Now he has at least one of almost every type known.

Although there are nearly 200 dahlias in his garden, Hubbard says, "I have only 100 plants in all." His reason is: "Some time ago my wife told me not to get more than 100 plants as that would be enough for me to care for. So when I got to 100 I stopped counting. No matter how many I have from now on I'll always say I have only 100."

Hubbard has dahlias in every shade of pink, red, yellow, purple, gold, white, copper, lavender, orange, and cream. They range from two inches to 14 inches across.

"Growing dahlias is a lot of work but the flowers are so beautiful it is worthwhile," said Hubbard. 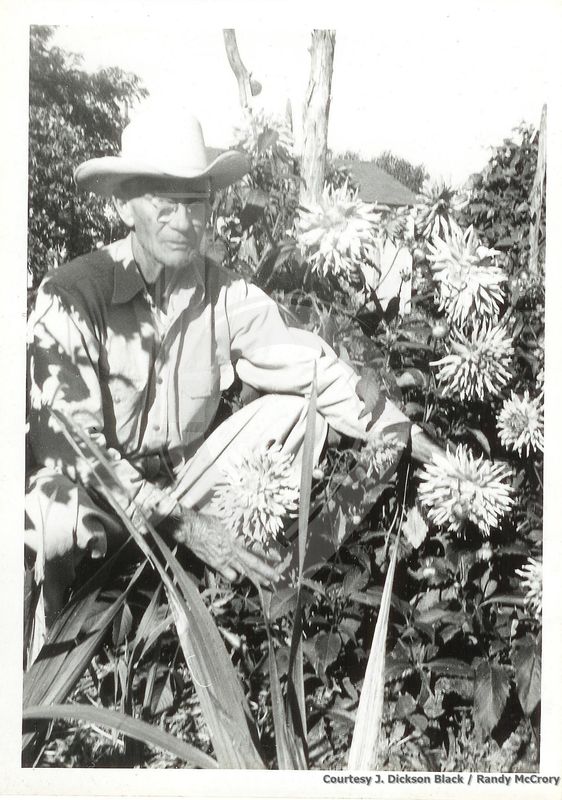 Mr. Hubbard showing off some of his beautiful dahlias
His advice for growing and caring for dahlias year around is:

"In the fall just after the first killing frost, cut off the dahlia stocks about six inches above the ground. Dig them up and pack them in paper, leaving the dirt that hangs to the roots. Put them in a dry cellar until spring.

"It is best to plant them from the 1st to the 15th of May. If they are planted much later there won't be as many blooms per plant.

"If they start to sprout earlier, cut off the sprouts but don't break them off as would be done to other roots. A tuber root is far better to plant than a pot root."

Hubbard sets his rows seven feet apart and the plants six feet apart in the row. One tuber is set at each place. A tall stake is also set with each plant so it will be ready to tie the plant to as it grows.

Hubbard makes the holes in which he plants a little deeper than is needed. Then he adds one cup of bone meal, two inches of dirt on top of this. Next he plants the tuber.

After the plants are up Hubbard puts four tablespoons of 4-12-4 around the plant, about eight inches from it. If they do not seem to grow well,  he may add more later.

"The plants are to be sprayed the every ten days with DDT from the time they come up -  to combat grasshoppers, beetles, spiders and mildew.

"Later you will have to watch for the corn bore. This can be recognized by a plant starting to wilt. Make a small hole in the first joint of the stock above the ground and then look up the stock to find the hole where the bore went in at. Drop a few drops of spray in the hole with an eye dropper," he said.

Hubbard said if all but one bud on each stem is picked, the size of the flowers will be increased one fourth of an inch or more.

"As the plants grow they must be kept tied to the stakes, and also trimmed some.

"The cool fall nights is what makes the beautiful color in the dahlias," he said.

Several hundred persons stop at Hubbard's home each year to see the dahlias. He does not grow the flowers to make any money, but gives them to the churches and persons who are ill. "My happiness comes in seeing others happy with the flowers," he said.

"It would be hard for me to say which dahlia was the prettiest," said Hubbard, "They are all very pretty."

The dahlia grows wild in Mexico and Central America. The flower was cultivated by the Aztecs, and the Spaniards took it back to Spain. In 1789 some were taken to England, then all over the world. They were named for Anders Dahl, a Swedish botanist.

The wild dahlia was flat with a yellow center and eight single scarlet rays.