David S. Foster  - Meat Market
David S. Foster was the son of John W. and Rhoda A. Kell Foster. John and his wife moved by ox wagon from Bedford County, Tennessee, to Pea Ridge, Arkansas, in 1842. His son, David S. Foster, was born in Pea Ridge November 17, 1858. He was one of eight children in the family.

About 1894, David moved to Rogers, establishing a meat market there for two years. He moved to Bentonville in 1896 where he and H. B. Wright founded their meat market on the square. Back in those days the only items a meat market would sell were meat and bread. In 1899, David bought out Wright, and they moved the location of the market to South Main Street. Foster's son, Charles came into the business and it was renamed Foster & Son. A copy from a 1899 store handbill reads, " On this same day we started on a cash business strictly. This does not mean one, but means all every body", and also on the handbill, "Loin and round steak, 10 cents per pound; chuck steak, three pounds for 25 cents." 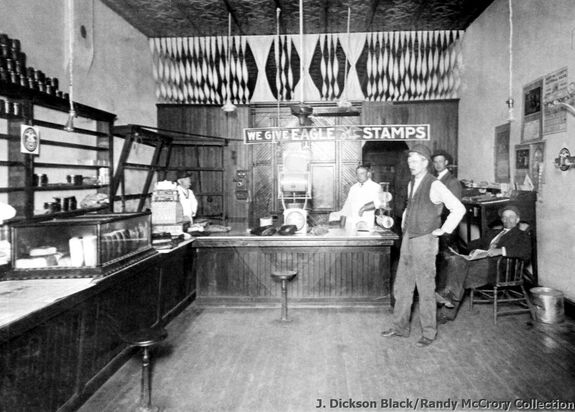 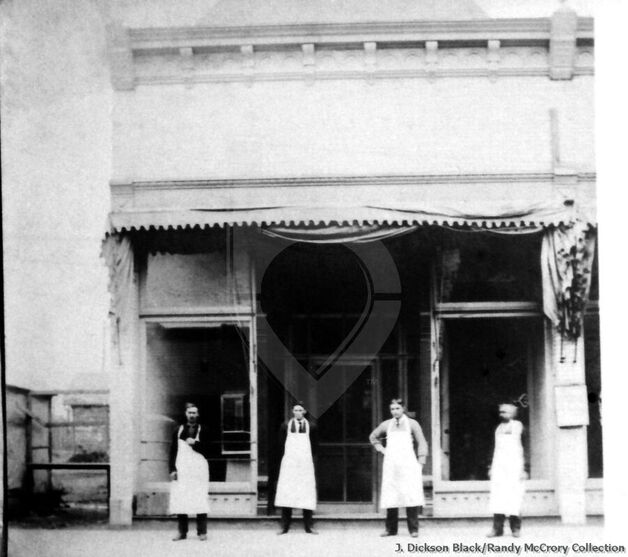 Foster Meat Market - Taken in 1905, L to R: D. S. Foster, Charles Foster, Dot Ford, and George Hutchinson
The two men ran the store in the same location until 1918. Then the market closed and the equipment sold. In the early part of the century, butchers had to butcher their own cattle. The Fosters butchered late in the day or at night, then brought the meat to the shop and hung it on hooks on the wall in front of the market to cool.

​The meat was left there until morning, then was put in the ice box. 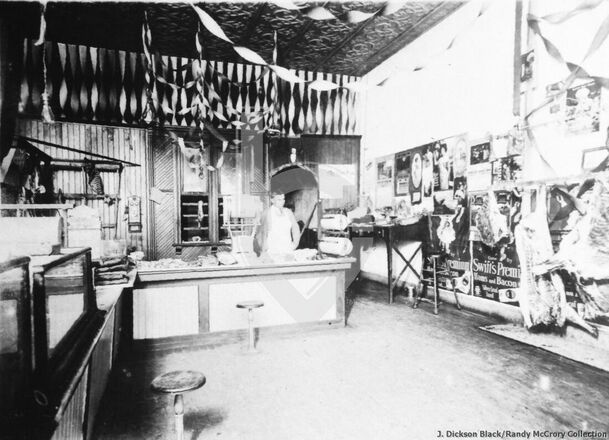 The gentleman in the photo is believed to be Charles Foster, the son of David Foster.
​To the far right you can see the meat cooling before it was placed in the freezer.
"Three and one-half tons of ice is a lot," said Charles Foster, "But that is what we had to keep on hand at all times to fill our iceboxes. Back in those days ice was the only way we had to cool things.

Cutting meat was more difficult then, for there were no electric saws and meat grinders. It was all done by by hand with a knife or handsaw. The meat grinder was turned by hand.

It kept three to four men busy cutting meat and waiting on the customers. The average week's sales were about six hogs, six beef and two mutton. Usually the Fosters paid from one and one-half to two cents a pound for the meat, live and on the foot.