20th century was just beginning when Gaileys came to Bentonville
Written by Dean Cheatham - No date on the article (Possibly mid 1980's) from the Morning News, now the NWA Democrat Gazette.
Percy and Maxie Gaily have seen a lot of history  made in Benton County, much of it in Bentonville where they still live.

Percy was born 78 years ago in Indian Territory, just across the state line at Maysville. Maxie was born while her parents had a dairy farm between Rogers and Bentonville on state Highway 102.

His father was also a farmer, with land in the Sugar Creek Valley along state Highway 72, and also served as county collector for a time.

His duties as sheriff entitled the family to the privilege of living on the first floor of the county jail. The old jail building still stands on North Main Street about a block off the Bentonville Square.

Percy and Maxie attended school together at Bentonville High School, at a time when it was big trouble to get caught holding hands with a girl on the school grounds. Percy found that out first-hand.

Percy appears frequently in pictures of Bentonville High School sports teams. He said team members had to buy all their own equipment then, what little equipment was used.

As a pitcher in the '20s he won the district championship game for the Tigers against Springdale at Fayetteville.

"I was the third-string pitcher and won that game," he recalls proudly. Maxie was on the cheerleading squad, along with many of the girls in the school.

"Everybody who wanted to be a cheerleader just put on a black skirt and white blouse," she said. 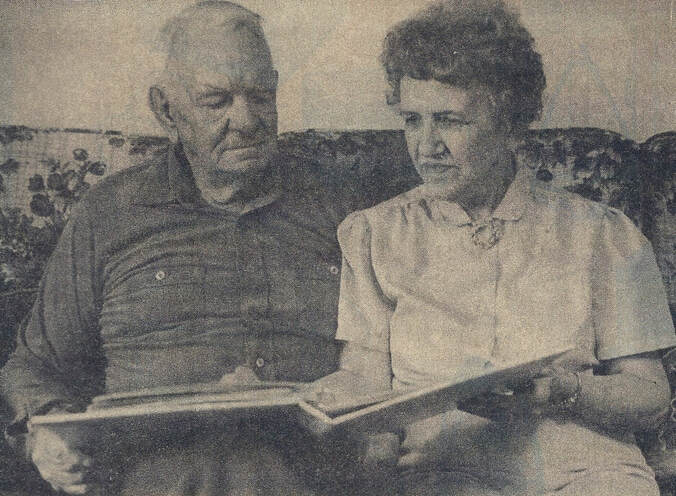 Percy and Maxie Gailey thumb through an old scrapbook
Social activities in the 20s included square dances and round dances, and a fruit fair on the Bentonville Square similar to today's county fairs. Apples were in plentiful supply, attesting to the large apple industry in the county at that time.

Their parents would shop at Stroud's department store in Rogers, and Percy said that even in later years, when his father could not remember his shirt size, he would send Percy there, telling him that "Harold will know my size." The late Harold Wardlaw knew the sizes of most of the regular customers.

Percy was a trombone player, and formed a band with his Navy unit in World War II.

When he returned from the war he married Maxie in Rev. Peter Carnahan's house now, the location of Mary Maestri's restaurant in Bentonville.

Percy went on to work in Charlie Craig's tire shop, now a barber shop at Northwest A and Second streets. Then for 20 years, he ran the Phillips 66 gas station on the opposite corner.