Graves of Pioneers Give Place To Business Building (The Madison County Record - Huntsville, Arkansas - May 14, 1925)
Bentonville -There was in progress last week of the little city of Centerton, four miles west of Bentonville, the removal of the bones of some of the most prominent of Benton county's pioneer citizens, from a spot where they have rested for 77 years, to a nearby public cemetery, the removal being made necessary by the sale of the property for a business building. The event has recalled many events in the early history of the county and has attracted wide interest in the neighborhood. The tombs are those of Col. James McKisick, who came from Scotland to Tennessee, and to Benton county, Arkansas, in 1834, of his wife, Mary V. McKisick and members of their household.

The graves in this ancient family burial ground were covered with vaults of native stone with slabs of European marble with quaint and beautiful lettering. The stone of the vaults was well cut and the slabs of marble are the full grave length and it is said that the lettering was done in Europe and the slabs brought to the Arkansas frontier by sailing boats, river boats, and ox-teams. On the tomb of Colonel McKisick appears these words: "To the memory of James McKisick, who departed this life on the twelfth day of January, 1848, in the sixty-fifth year of his age and in the confidence of a certain faith, in the comfort of a reasonable religious and holy hope in favor with Thee, our God, and in perfect charity with the world." On the tomb of Mrs. McKisick the inscription reads: "To the memory of Mary V. McKisick, consort of Colonel James McKisisck, who departed this life on the eighth day of December, 1854, in the sixty-seventh year of her age, in full communion with the Catholic Church," followed by words similar to the inscription on the tomb of her husband. These tombs have been carefully reconstructed in the Centerton cemetery a short distance away. 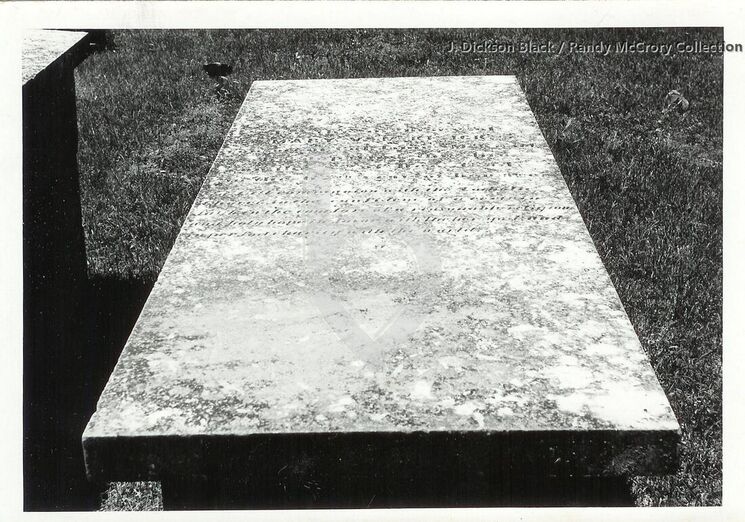 One of the tombs of the McKisisks in the Centerton Cemetery
There were about 10 graves in the plot which was marked by a grove of immense persimmon trees and about a quarter of a mile away is another plot where there were buried five negro slaves belonging to the family. One of the graves of most interest was that of Colonel McKisick's nephew whose body was brought to the family burial ground from Fort Smith 55 years ago. This grave contained a metal casket well preserved except for one small hole which had rusted through and from the broken glass front could be seen the skeleton. It is said the man died of smallpox and this may have been the explanation of the metal casket. It is said also that some residents of the neighborhood thought there might be danger in moving the caskets on account of the death having been caused by smallpox, though 55 years have elapsed.

A grandson of Colonel McKisick, Charles Dean McKisick, of Big Cabin, Okla., the last of the family to own the place, is here superintending the transfer of the remains of his relatives. Mr. McKisick was born on this place in 1848, and is the son of Alexander McKisick, who died there in 1865. His wife, the daughter of William H. Callis, who came from Tennessee to Arkansas at an early age, is with him. 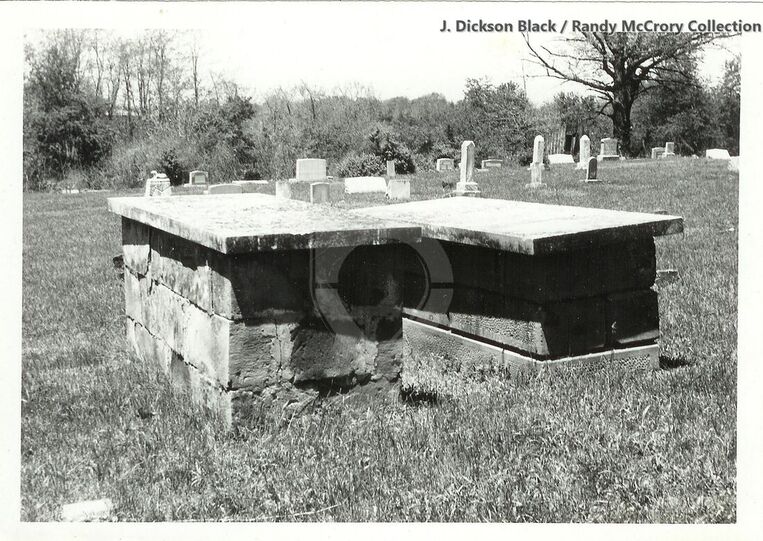 Photo taken of the McKisick's grave in the 1950s