Harvey's Secret Kept, Dynamiting Called Off
From the Rogers Daily News, May 15, 1963, now the NWA Democrat Gazette
The foyer of Coin Harvey's planned pyramid to a dying civilization at Monte Ne still is intact. Although owner W. T. McWhorter had planned to dynamite the structure Tuesday afternoon in search for "hidden relics" before turning the deed to the land over to the government, the blast never materialized.

The U. S. Army Corps of Engineers stopped the dynamiting of the amphitheater, built by the late William Hope "Coin" Harvey, to unearth relics Harvey was believed to have placed in a vault under the structure.

W. T. McWhorter, of Rogers, who purchased the Harvey property in 1948, planned the dynamiting to find the long-lost relics Harvey collected to place in a pyramid he planned but which was never built.

McWhorter said he wanted to look for the collection before he turned the property over to the federal government at midnight Tuesday night. It will be inundated within a year by the proposed Beaver Reservior.

But a Corps of Engineer attorney, Donald Waid of Rogers, brought a letter to Hardy Croxton of Rogers. attorney for McWhorter, advising the blast be cancelled.

E. G. Steadman, in charge of the Engineers' office in Rogers, said his office contended the Corps of Engineers took control of the property from the time condemnation proceedings were filed in March. The condemnation suit is pending in U. S. District Court.

​Steadman said any attempt to go through with the blast would be a violation of the law. 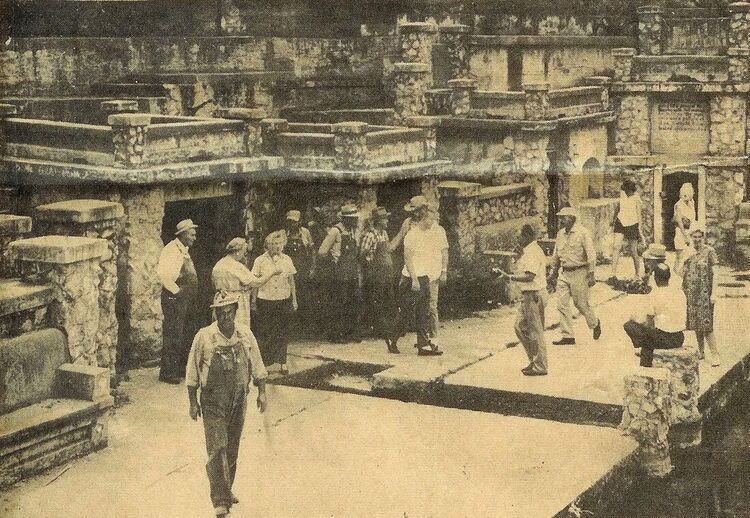 Harvey's Amphitheater Spared -- Col. William H. "Coin" Harvey's pyramid amphitheater at Monte Ne was spared Tuesday afternoon when the U.S. Army Corps of Engineers intervened to block dynamiting of the structure by W. T. McWhorter on the eve of transfer of title to the property to the federal government. The Engineers acted on the premise that the federal government had exercised control of the property since the filing of a land condemnation suit. The amphitheater will be submerged by the water of  Beaver reservior. The picture shows a few of the hundreds of people who had gathered to witness the dynamiting. McWhorter had planned the dynamiting in search of articles he believes Col. Harvey had stored in a secret compartment deep beneath the massive stonework.
​
Croxton said it was a technical matter, but after being advised of the seriousness with which the government regards it and with  little time to check it out, he and McWhorter decided against blasting.

Croxton received the letter at his office at 12:30 p.m. and by the time he reached McWhorter at the scene, it was 1:30 p.m., only 30 minutes before the dynamiting was scheduled.

Several hundred persons had already gathered at the scene and the area was jammed with cars.

Holes for the charge had been drilled in concrete walls in one of the several vaults, and a crew was standing by with the dynimite.

Croxton made a public statement to the crowd, explaining the situation.

He and McWhorter conferred for several minutes before deciding against going ahead with the blast. Waid arrived shortly after Croxton, and was at the scene for some time.

McWhorter said, "I'm certain there were items buried in a vault beneath the ampitheater. I've talked to oldtimers who helped seal it up."