Norborne  S. Henry – For nearly forty years he has been actively identified with the business affairs of the city [of Bentonville], and both in domestic commercial matters and in industrial affairs is extensively known. Born in Augusta county, Virginia, on the 10th of August, 1841, Mr. Henry passed his boyhood and youth in Waynesboro, where he acquired his education in a private academy. His father, Dr. Richard H. Henry, was a native of Lancaster, Pennsylvania, where his birth occurred in 1800 and whence he was taken by his mother to Staunton, Virginia, when but six months old. The father of Dr. Henry was a Scotsman and was the founder of the America branch of the family. The mother of the Doctor, after the death of her husband, became the wife of M. B. Brooks.

Dr. Richard H. Henry passed his life in Augusta county, Virginia, and after due preliminary educational training he was matriculated in a medical college in New York City, in which he was graduated as a member of the class of 1819, with the degree of Doctor of Medicine. He was engaged in professional work in the Old Dominion commonwealth until his death in 1844. He married Susan M. Cosby, a daughter of Dabney Cosby, a Virginia contractor. She long survived her honored husband and passed away in January, 1861.

Norborne S. Henry, began life as a merchant's clerk at Pittsylvania Courthouse, Virginia, and when seventeen years of age he returned to Staunton and spent one year, 1858, in the academy at that place. He then went to Lexington, Virginia, and secured a clerkship in the establishment of Bacon & Lewis, and was so employed at the time of the inception of the Civil war. Mr. Henry entered the military service of the Confederacy on May 11, 1861, as a member of the Rockbridge Artillery, Stonewall’s brigade, First Division of the Second Corps, Army of Northern Virginia. He participated in all the important engagements of his command in Virginia, Pennsylvania and Maryland, starting in at Falling Waters, Virginia, First Manassas, then back to Shenandoah Valley, where he fought at Kerntown, McDowell, Middleton, Winchester, Cross Keys and Port Republic. Thereafter the army was again transferred and it joined Lee’s army where it opened the Seven Days' fight. Following this came Cedar Run, Second Manassas, Sharpsburg and Fredricksburg, Chancellorsville, Gettysburg, Widerness, Spottsylvania, Cold Harbor, Fort Gilmer and Appomattox, where he was a witness of the closing scenes of the prolonged and sanguinary struggle between the North and South. During this strenuous service Mr. Henry was a private until advanced to the rank of sergeant, and he was paroled as such at the close of the war. He passed through the shot and shell unscathed, save for a bruise by a spent ball at Second Cold Harbor and a good shaking up at Port Republic by the explosion, almost under him, of a twelve-pound shell, which almost buried him in the dirt and debris caused by the concussion.

On January 1, 1865, Mr. Henry became a clerk in Danville, Virginia, where he remained until 1867, when he removed to Sedalia, Missouri.  After two years’ residence in the latter place he went to Senecca, Missouri, and engaged in the hardware business. In 1871 he came to Arkansas and established himself at Bentonville, where he opened a hardwarde establishment. He sold goods until 1885, when he joined in a railroad venture, building a road from Rogers to Bentonville, the Bentonville Railroad Company being the constructing and operating company. Mr. Henry was general manager of the road when he severed his connection with it, after a period of thirteen years in the business. In 1897 he again opened a general mercantile establishment in Bentonville, and after spending several years in various commercial pursuits he permanently retired from business life. At this juncture he entered politics for the first time in his own interest, and he became the nominee, on the Democratic ticket, for the office of county treasurer of Benton county. He was elected at a special election in July, 1909, and was re-elected in the fall election of 1910. In the office he has emphasized the importance of keeping complete records of the daily transactions in the treasurer’s department by installing a new system of bookkeeping, showing daily balances of all funds of the county, even to the most remote school district, and showing at all times the receipts and disbursements of any fund for the immediate information of the public or the county court. In his political convictions, as already intimated, Mr. Henry is a staunch adherent of the principles and policies of the Democratic party, and he has ever given freely of his aid and influence in support of all measures and enterprises advanced for the general welfare. Both he and his wife are devout members of the Presbyterian church, in which he ​is serving as president and elder. He has attended the presbyteries and synods of the district and he was a member of the General Assembly of the church at Atlanta, Georgia, in 1903.

On the 29th of September, 1873, was solemnizing the marriage of Mr. Henry to Miss Martha E. Talliaferro, a daughter of Dr. Charles D. Talliaferro, of Tennessee. Mrs. Henry was born in Benton county, Arkansas, in 1851, in which year her parents established their home here. From this marriage they had eight children. He passed away on November 23, 1926, and is buried in the Bentonville Cemetery. 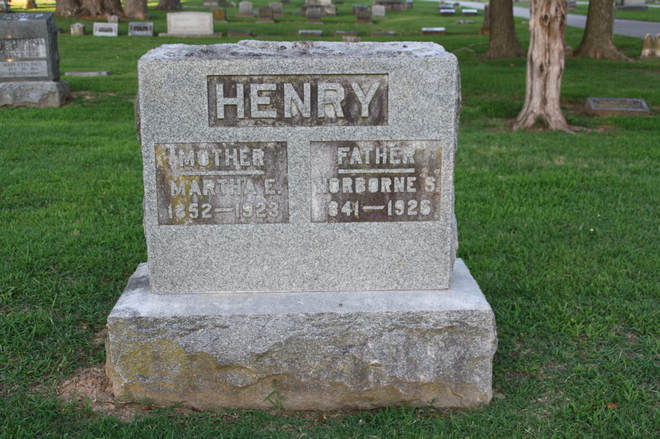