History of Cross Hollows
Author Unknown
The first Dickson child, Robert, son of John B. and Mary Dickson, was born in Bentonville, in 1831, and he was a nephew of Major Ephriam Dickson.

Ephriam Dickson, who had established a store and blacksmith shop at Cross Hollows, was appointed Postmaster on the 19th of September, 1843, and the remains of the fireplace that was in his store, has been located just east of the old Wire Road, and also east of the Guy Biggs home. Where the Biggs home is now located was the location of the blacksmith shop and also the barns where horses were kept that were used by the stage coaches, when changes were made at Cross Hollow. Across the ravine near the big spring, was the home of Major Dickson where the Tavern was located by George McGarrah, after he bought the land from Major Dickson, who moved to Fayetteville, and died in 1852.

After McGarrah took over the property he also ran the store and blacksmith shop, and included in his other industry, a Still, which at the time was very necessary to any community. Whiskey at that time was sold at 25 cents per gallon, but later the government placed a tax of 25 cents, which caused the price to go up to 50 cents. After the price was raised, many stores quit allowing customers free drinks. There was usually a keg of whiskey in the rear of the store, with a tin cup hanging on a string, and any customer could get a drink while doing his trading. 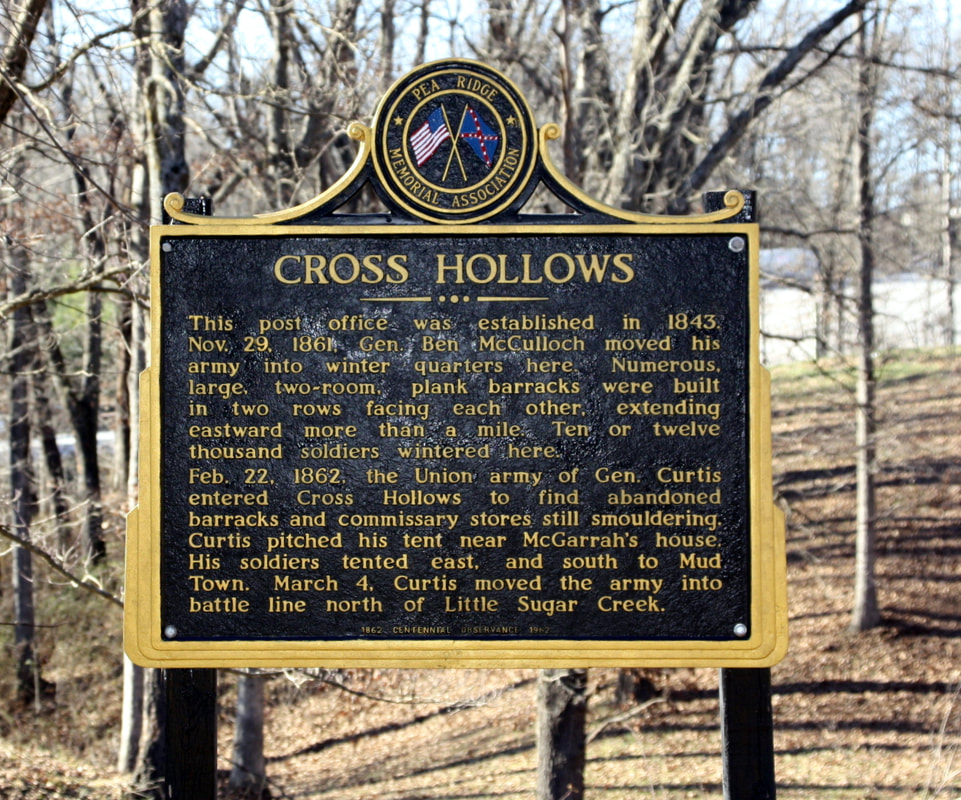 Historical Marker at Cross Hollows
The Confederate army was driven out of Cross Hollows about the 17th of February, 1862, upon the approach of the Union army commanded by Gen. Samuel Curtis. When the Confederate army left the camp, they tried to burn the encampment and destroy all the provisions they were unable to remove. Upon the arrival of the Union army, there were still the remains of some of the cabins, burning, as well as some of the supplies. The newspaper reporter with the Union army, reported that the Confederates had left poisoned food in the camp. Much of the food left was old and not of much use to the Confederates. What the reporter failed to report was, that when the Union army arrived at the camp, there had been much of the whiskey, along with the mash from the stil, that was imbibed by the soldiers, which caused the death of several and also caused many of them to be sick for some time. They were not acquainted with the method of making whiskey, and had drank some first run, which all old timers know was like liquid fire. 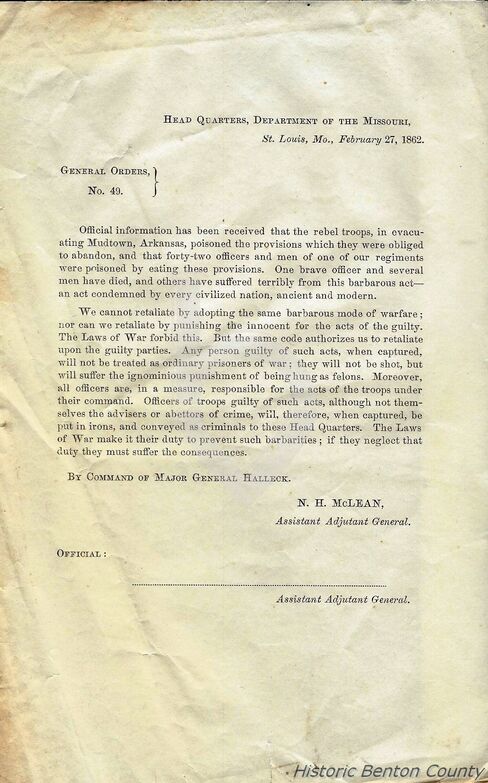 Letter put out by the Assistant Adjutant General Office concern anyone caught poisoning food, and the results if you were caught doing it
Camp Cross Hollows was occupied by Gen. Carr of the Union army until the entire army was called back to Camp Hallack, on Sugar Creek, where Brightwater now stands. This branch of the army also occupied Huntsville, while another army was located at Osage Springs, six miles west, where Gen. Curtis spent some time before returning to Camp Hallack, on Sugar Creek, where they dug trenches and fortified the top of the hills for about one mile.

When the Union army occupied Cross Hollows on February 18, 1862, the George McGarrah family was taken over. George was placed in a tent and a guard was placed over him. His wife, Nancy Laura, along with Eliza, Mary and Margret were required to cook food for the officers, who had established their tent near the house and spring. The bad part was, that she was forced to cook her own food, meat, from hogs that were killed by the soldiers and also her own crop of chickens she had saved for themselves. George was 47 years of age at the time and his wife was 39. They had six children ranging from 4 to 18 years of age.

The McGarrah family lived many years at Cross Hollows. George McGarrah was appointed Postmaster Sept 19th, 1875. and served two years. His son, Abraham McGarrah, who was but 7 years of age in 1860, later bought the old home place and also continued the making of whiskey until it was outlawed by the State. Many of the old timers will remember in later years, when the still had been moved further down the valley, that if they were well known, could, by making a certain signs, drive by and have someone walk out of the timber and deliver a jug to them.

Cross Hollows was later to play an important part in that it was here that Dr. W. J. Curry, in 1877, was on a stage from St. Louis bound for Texas. When he reached Cross Hollows and had stopped for a meal and refreshments, he found himself low on funds and decided to set up an office there for the practice of medicine. He had been told by his physicians to locate to a drier climate, otherwise he had only about a year to live.

After Dr. Curry drank from the big springs, then imbibed some of George McGarrah's stimulants, was when he made his decision to stay in Arkansas. After one year there he was completely cured and practiced medicine there until 1881, when he moved to Lowell, but in 1882 moved to Rogers where he bought a home and set up his office. When he died Jan 4th, 1947, at the age of 96 years, he had served his community for 70 years, which is a record for any doctor in Northwest Arkansas.

F. F. Freeman established the Rogers White Lime Company in Cross Hollows, just below the Biggs home, and for years this plant was operated at a profit. There were several small homes erected there for the families who worked at the lime kiln. These too are all gone and only a few of the descendants of the old timers are still living in the community which was once one of the outstanding places in the county. 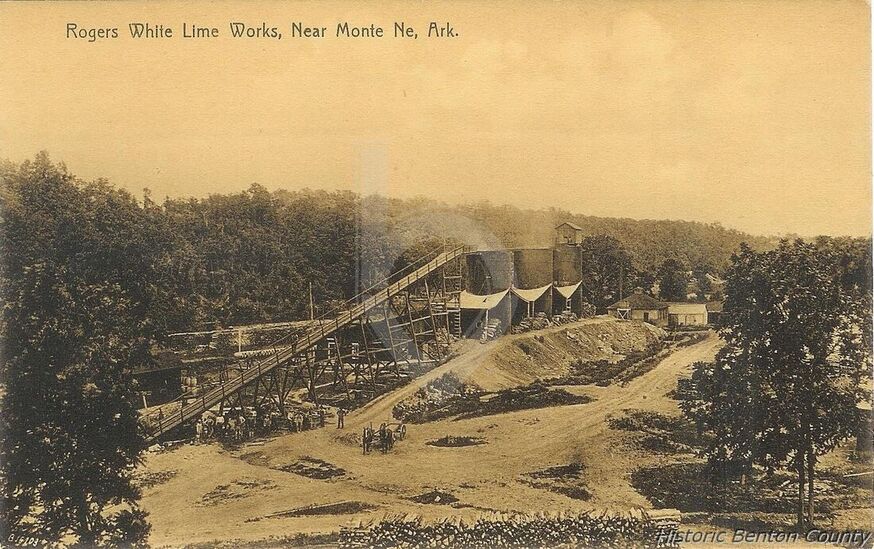