History Of Siloam Springs
by J. Dickson Black
The Indians were the first people to make their home at the springs, around which the town of Siloam Springs has grown up.

Simon Sager was the first white man to live near the springs. He came in 1835 and built his log cabin one mile west on what is now called Sager Creek. As soon as he had his house up he started the Methodist church. This was the first church in that part of the county. He preached regularly in his home until he was killed in 1864.

In 1844 C. D. Gunter moved here from Tennessee, He bought a large farm lying on both sides of Sager Creek and near the springs. Later he started a general store. At that time the Hico post office was two miles away but it was moved to his store in time, and the town of Hico started.

When the war came along Mr. Gunter and his family left and the town died out for a few years. He came back and started it up in about 1865. Then until 1879 Hico was a small village and a good trading place and had a good mill.

In 1879 one John V. Hargrove who owned the land around the springs had the land surveryed and laid out a town. It was to be a health resort. He named it Siloam City. Many of the streets were given Biblical names.

John V. Hargrove opened a general store as soon as the town was laid out. There was a big boom and by the spring of 1881 Siloam City was made a second class city and had a population of over 3000 people. It didn't make the grade as a health resort, and when the railroad didn't come in as they had planned, people started leaving fast. Soon there were less 1000 people living in the town. 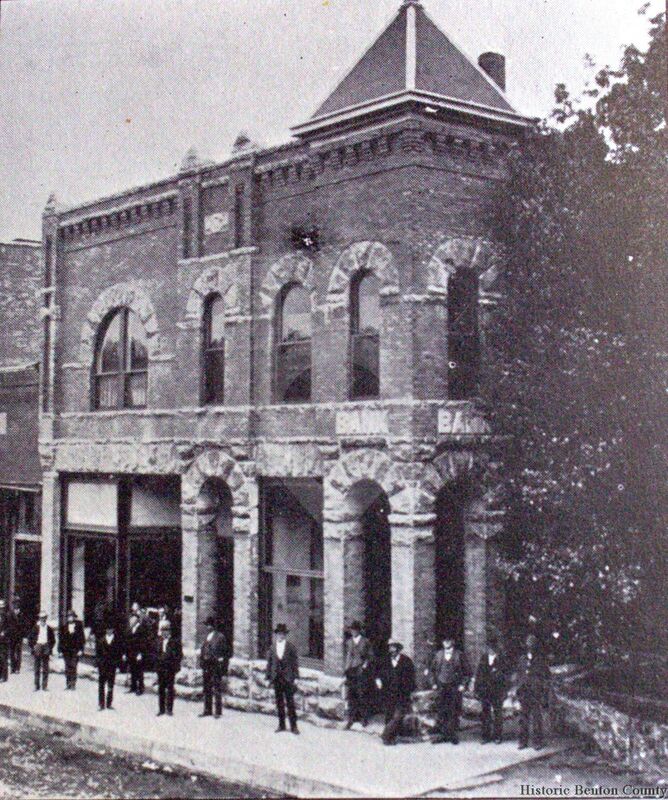 Farmer's Bank - Siloam Springs
The first newspaper, The Sun, was started in 1880. From then on there was always a paper but it changed hands and names many times. Today Siloam Springs is the only town in Northwest Arkansas with two weekly newspapers [as of the writing of this story.]

The name had been changed soon from Siloam City to ​Siloam Springs, and the post office from Hico was moved there.

The town made very little growth after the boom was over until 1894. Then the Kansas City, Pittsburg and Gulf railroad was built through the town. In the next two years the population doubled.

The first church to be built in the town was the Congregational Church. Soon there were a dozen or more.

The first school started as soon as the town did. There was a three month school held in vacant store buildings. It was a free school. The Congregational Academy was started in the 1880's and the Siloam Springs Academy just after that. In 1898 the Arkansas Conference College started. Out of these grew the Siloam Springs school system. 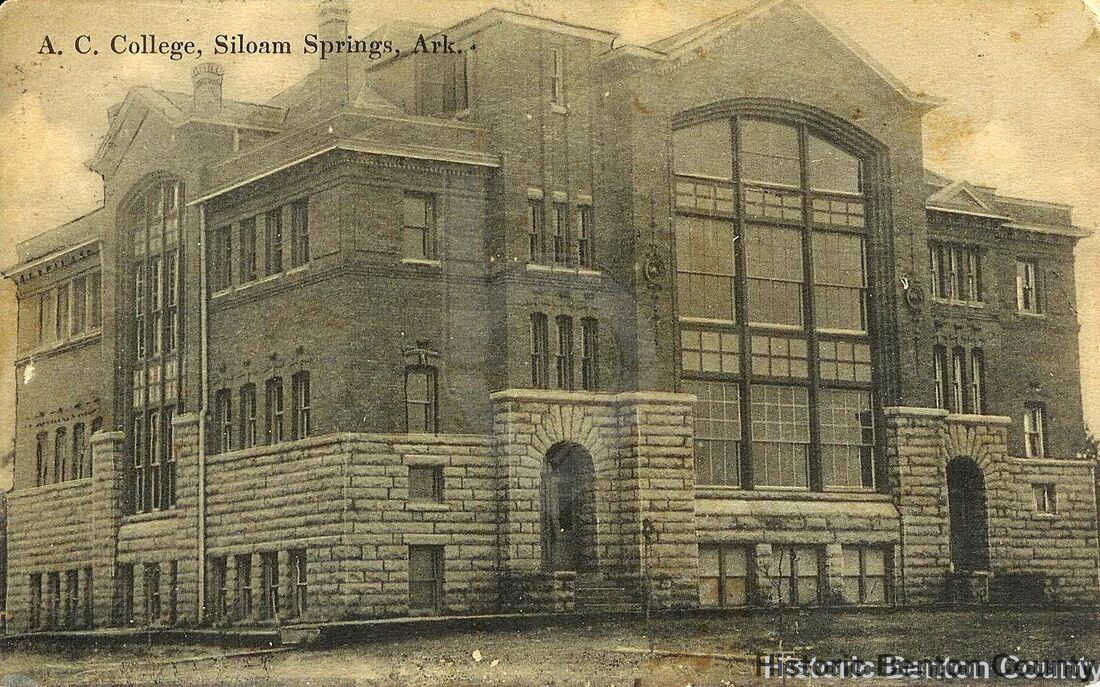 Postcard of Arkansas Conference College building
Siloam Springs was located in a very good place and the town has grown over the years. They have many industries including the milk plant, poultry, canning, hosiery, plastic and many others, as well as a good number of stores and businesses.

In 1920 the John Brown University was opened, and it too has grown and is now a big school.