Hit and Miss Bentonville School History
​By J. Dickson Black
This article will be a bit hit and miss as I tell a little about some of the early schools history in Bentonville There is not too much recorded history of these schools, but I have been able to find a few early newspaper articles and ads about thm.

By 1840-41 there was at least one subscription school in Bentonville. Like most of these schools at that time it would have run just three month or four months out of the year. The students paid a dollar a month, which money was paid to the teacher, as there was no school tax at that time.

For many years there were also private schools held in Bentonville. Most of these were short lived . These were held in the home who ever ran them.

During the Civil War there were no schools of any kind held in the town. A few women did try to teach their children a little at home in those years.

Goodspeed's history lists a public and high school as having been started in Bentonville in 1872. It didn't say if the high school was free or if the students paid a tuition, but that was the beginning of a free public school. For many years the high school was just a two years\ school, then a student went on to the an academy if they wanted more schooling. 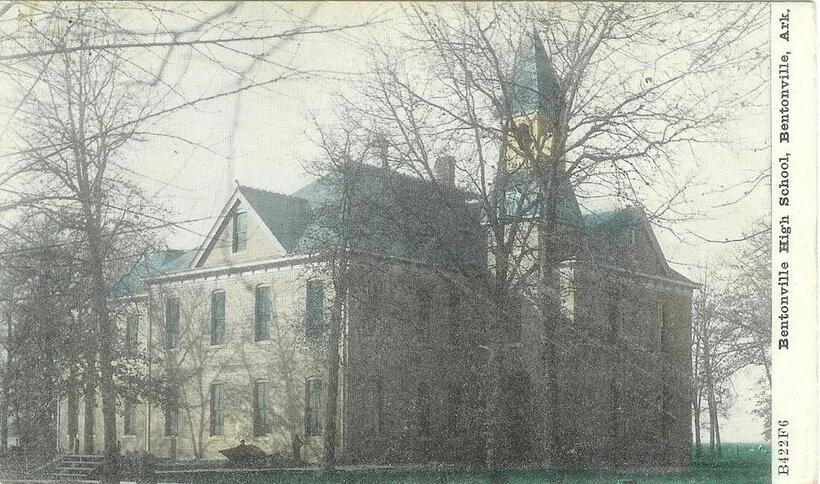 This school housed all Bentonville students at one time and was located near the cemetery
The Fayetteville Democrat, July 20, 1872, ran the following:

"We attended the corner-stone celebration which took place at Bentonville on Tuesday last. It was an occasion of interest and importance. It had been announced throughout the county that Prof. Morgan H. Looney would be the speaker of the day: and the enthusiasm of the people of the county on their educational enterprise, and the fame of Prof. Looney as a speaker, together with the general desire to see and hear the man who is to take charge of their college, caused a general outpouring of the citizens on that day at Bentonville. At an early hour vast crowds might be seen coming in from every quarter of the compass. The roll of wagons and carriages, and the clatter of hoofs, and the hum of men made it more like a city than a quiet little country town. 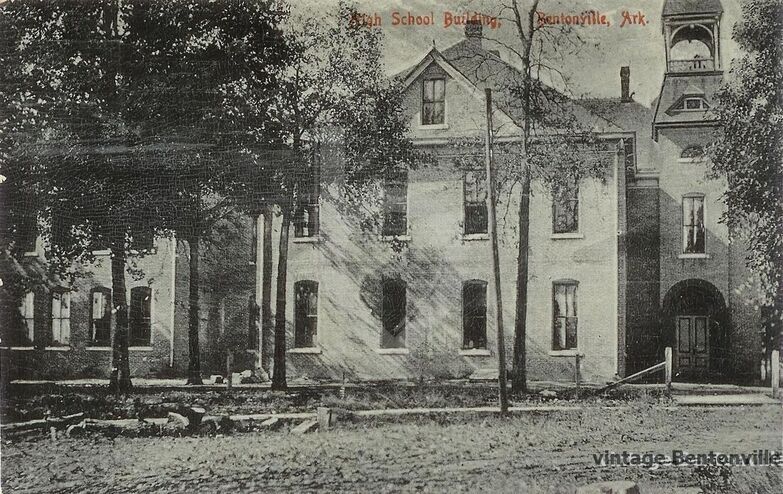 "One circumstance we would mention mention here which cast an air of gloom over all the proceedings. The corpse of Rev. C. M. Richards, who died on Monday, near Cincinnati in Washington County, was brought home, for interment and arrived on the morning of the 16th, the day of the celebration, Mr. Richards was pastor of the Presbyterian Church in Bentonville, a young man of fine accomplishments and unexceptionable piety. He was not only universally beloved, but he had been one of the prime movers in getting up the enterprise, for the furtherance of which the day was set apart. The vast crowd attended the funeral of Mr. Richards, and thence proceeded to the College grounds, where with the usual ceremonies the corner stone was laid.

"After the ceremonies, the crowd repaired to some little distance in the beautiful grove, where a stand had been erected for the speakers and seats arranged for the audience. After music by the Bentonville Brass Band. Judge Ellis of Bentonville, who had been selected to introduce Prof, Looney as the speaker of the day, took the stand and entertained the audience with one of those terse, vigerous, impressive and eloquent herengues for which the Judge is famous. made a most impressive and eloquent speech...

"Prof. Looney took the stand at the close of Judge Ellis's remarks, and amid the breathless attention of the large assembly began his discourse on the occasion that had called them together. His oration on this occasion was in keeping with the man. His arguments were logical and convincing, his language was chaste and elegant, his illustrations apt and bewitching. For an hour we were entertained with a gush of eloquence... We speak knowingly when we say that that address has made Morgan Looney well nigh the idol of the people among whom he has chosen to make his future home...

"Amid such unbounded ethusiasm, such universal harmony, such willing co-operation on the part of the people of Bentonville and  the county, the Bentonville School is famous before it begins..."

The paper went on to say that a fine lunch was served to all after the speeches were made.

Even though the newspaper called this a College, it must have been the public and high school building that the Goodspeed history spoke of.

"The Bentonville public school as a graded school began its first session last Monday. After chapel exercises, conducted by Rev. Mr. Boggs, the organization of the schools was begun by enrolling and by making temporary classification. Monday the enrollment  reached 215, yesterday it was about 250.

"Miss Koons has charge of the English Grammar class and Miss Holleman the Geography and reading classes.

"As Bentonville has never had a well graded school before, and as there has never been an adopted series of text-books, some have complained because their children were graded lower than was expected and because they had to buy some new text-books but almost all are becoming reconciled. We are inclined to think that it would be just and wise to give the teachers a little time to complete the organization before censuring or grumbling.

"Prof. Dokes say the deportment of the students has been almost perfect so far. All the teachers seem to have entered upon their work with a commendable zest and energy and the students are applying themselves well. We trust the President will have the hearty encouragement of every patron and citizen and that the school will become what we have long needed, a first class graded school."

In the summer of 1888 a small article in the Benton County Sun said, "Miss Jettie Jefferson is building a neat school house in the Deming addition to house her private school."

he following was taken from an ad in the Sept. 1st, 1888 Benton County Democrat. "The Bentonville Business College will open in the Dinsmore Block. The first course will open the first of September. There will be four departments; Business, English Literature, Penmanship and Music..."

​It is too bad that better records were not kept on these early schools.