How Vintage Bentonville  and Historic Benton County  was formed

​Living History: The Museum That Never Closes
Today we find ourselves living in a world that is largely locked down, but even when most museums in the area have been closed, there is still one that remains open. Unlike other museums, vintagebentonville.com online museum is still open 24 hours a day, 7 days a week, 365 days a year.
During this pandemic, the group has been trying to publish more history on the site to give people something to look at while sitting at home. Several years ago, Vintage Bentonville launched this online museum. At that time, the organization had already been hosting two very popular Facebook sites call Vintage Bentonville and Historic Benton County. The online museum was largely the brainchild of Randy McCrory and his son, Jason McCrory. Randy is the collector of the two and Jason had the knowledge to put the technology together for the site.
The museum site, as well as the non-profit organization that was formed, has been built around Randy McCrory’s collection of twenty years, which focuses on historical Benton County memorabilia.  The beginning of this journey was really not so very long ago. In May of 2000, he visited a then-new site called EBay and bought his first postcard. It showed the Apple Blossom Court in Rogers that was located about four blocks from his house. That was the start of his history addiction.
Mr. McCrory says that you would think that after 20 years of collecting, he would have most of the postcards ever made from this area, but he still regularly finds items he didn’t previously have. Most days when he goes to the mail box, he says it’s like Christmas because there is some new treasure from Ebay to open.
What does Mr. McCrory’s wife think of all this? She is very sweet and supportive, and maybe just a little glad that he has his own hobby. For years, Randy worked two jobs, and most of the money used to buy things for the collection came from that extra income.  At first he only collected Rogers postcards because that’s where he has lived for over 45. Over time, he slowly began to collecting ephemera from other communities in the Benton County area. He started to attend postcard shows, traveling as far as Wichita, Kansas City, Memphis, and Little Rock, sometimes planning vacations that would get him near where a postcard show was scheduled.
Eventually he started to attend local auctions in hopes of picking up the next great treasure. After his collection had become fairly large, he started to let local museums make copies of his images. He also started to work with Gary Townzen, a local barber who publishes a local historical calendar each year with the proceeds going to charity.
He was also able to purchase several private collections over time, including in March 2014 the photographs and writings of J. Dickson Black, who was a well-known local historian. Another opportunity that furthered his interest in history was when he was invited to speak at a local history club in Rogers. Gathering information and photographs for a speaking engagement meant digging into the files and researching more deeply the times and events of the area.
As much as he was interested in local history, it seemed that Rogers had more than its fair share of historians, so he approached the Bentonville library about doing a program about Bentonville history since there was no museum entirely focused on Bentonville. The library agreed, and he dove into researching Bentonville history since there weren’t as many resources dedicated to that community. Over a period of times, he ended up doing three programs for the library, all with excellent turnouts.

Eventually a group of local Bentonville residents approached him to offer support for his efforts to keep Bentonville’s history alive. They formed Vintage Bentonville as a non-profit organization. It was shortly after this that the group launched their two Facebook sites, both groups growing rather quickly after being established.
The group had been looking into opening a brick and mortar museum. Eventually, after assessing at the challenges of acquiring property, funding and artifacts for display, the realization came about that most of what the group had was information in the form of postcards, photographs, and writings. At that point they decided not to go with a conventional museum, but rather an online museum. It has become a trend for museums of many types to have an online presence, but it’s rare for a museum to exist totally in cyberspace. Vintage Bentonville finds that most people who view their museum site do so during hours that traditional museums are closed.  McCrory thinks that what they’re doing now could be what more museums might look like ten years down the road.
The museum site itself has 12 topics at this time, with more to come, with many stories within each topic. One of those topics is the “Then and Now,”  an interactive page with a slide bar which shows specific places in Bentonville, comparing what it looked like in the past and what it looks like now.
Another other advantage of an online museum is that they can add a nearly unlimited amount of information to be viewed. The vintagebentonville.com museum site had over 13,000 views last year with over 36,000 page views.
The group tries to add several new things to the Facebooks sites weekly. They try to post a new image from the Benton County area at least every other day. The growth on these sites is unbelievable. The Historic Benton County site just topped 5000 members, with 340 new members in the last month alone. On this site we has 14,600 posts, comments, and reactions in that month. The Vintage Bentonville Facebook page has over 3500 members with 110 new members in the past month. That site had 9,300 posts, comments and reactions last month.
The group also believes in paying it forward. They have tried to photograph the area as it is today to preserve our history for future generations. Over 6,000 images have been taken in this project. Randy McCrory says that his collection is over 10,000 historical images and historically related items. Vintage Bentonville’s board of director consists of Randy McCrory, Hon. John Skaggs, Fred Coffee, Gary Black and Jackie Oakes Lopatofsky. 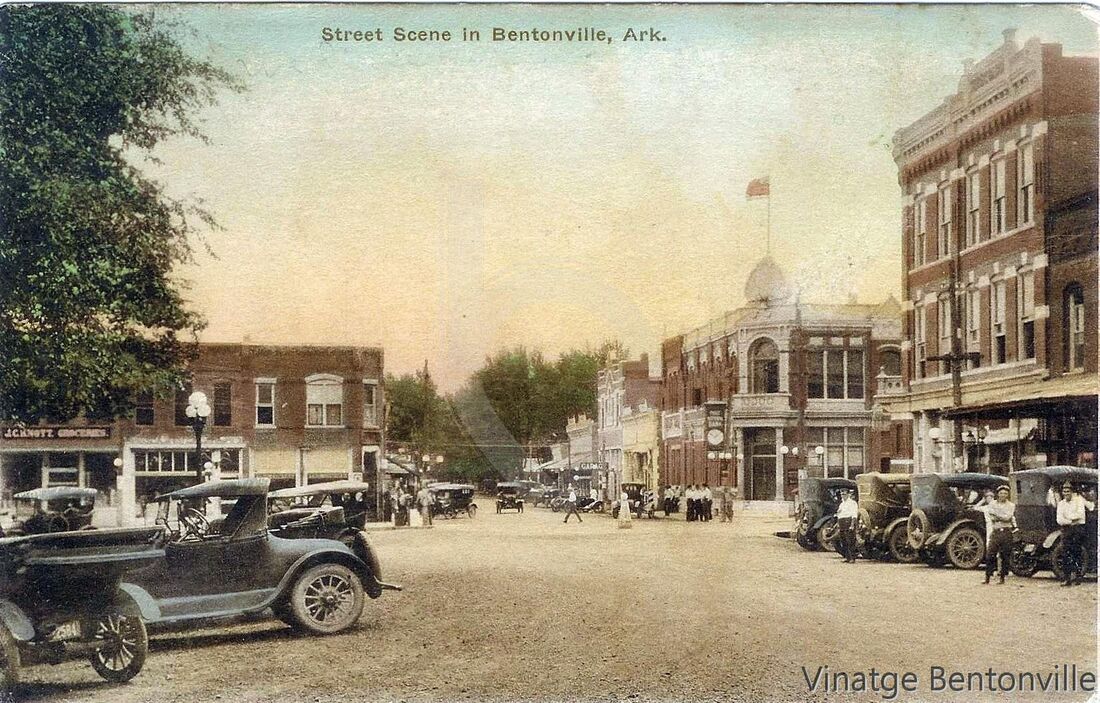