Indians Scalp Southern Foe at Pea Ridge
From Rogers Daily News June 28, 1959 (Now NWA Democrat Gazette)
It is a well known historical fact that a brigade of Indians from the five civilized tribes fought in the battle of Pea Ridge under the command of General Albert Pike, but it is less well known that Indians took part in the battle on the side of the Union army.

History has recorded that General Pike's Indians fled in confusion during the height of the battle, and the rout became so critical that it was necessary for the general  to order a full retreat.

An article published in the writer edition of the Museum Graphic, official publication of the St. Joseph, Mo., Museum, relates how the northern Indians held a "medicine" dance in St. Joseph some time after the memorable Arkansas engagement, brandishing the scalps of southern Indians taken during the battle.

The article, written by Bartlett Boder, of St. Joseph, told of the "Medicine" dance" which took place in front of the Patee House in St. Joseph in 1862.

The article was based on an interview with Miss Annie Horton, who remembered her father telling of the dance, and how the Indians brandished the scalps of enemies probably taken in the "Battle of Pea Vine Ridge in Arkansas."

"After the battle," Mr. Boder wrote, "Brigadier General Samuel Curtis, commander of the Union forces, wrote under a flag of truce to Major General Earl Van Dorn, the Confederate commander, complaining that General Pike's Southern Indians had scalped certain Northern troops during the battle, contrary to the rules of civilized warfare.

​"General Van Dorn replied that it would indeed be an infraction, but that Northern Indians in the battle had scalped some of Albert Pike's Southern Indians. 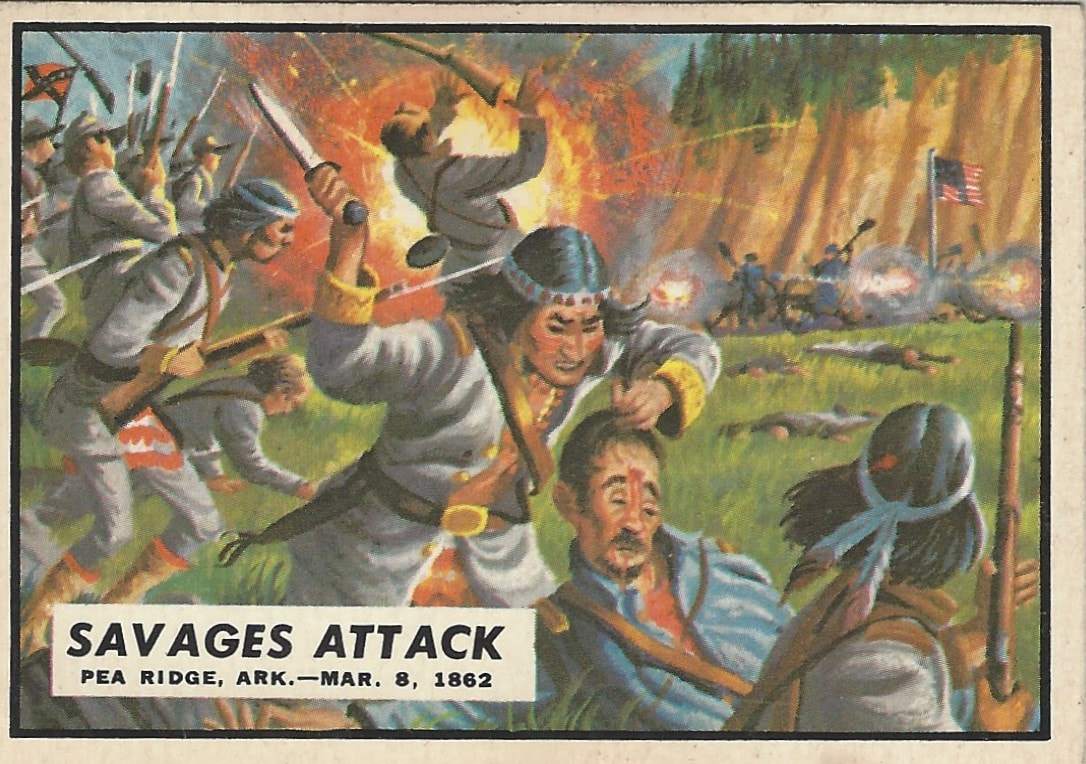 Brigadier General Albert Pike was in command of five regiments of civilized Indians, as well as two small regiment of other Southern troops. He had been chief Indian agent for the Indian Territory, and his five sub-agents with the five civilized tribes had been made colonels under him and the warriors from _______ tribe became the personnel of the tribal regiments.

This horde was totally without discipline. "Major General Van Dorn had unwisely placed them in support of General Ben McCulloch's seasoned Confederate troops. When these troops had made some initial gains in the battle against the Union troops of General Curtis, the "civilized" Indian troops of General Pike rushed forward to take scalps and plunder.

"This caused great confusion among the Confederate troops, and to make matters worse a Union sniper from an Illinois regiment shot General McCullouch through the heart. His post as commander in that section of the field went to General Pike, who was not a trained general officer. General McCulloch together with General Sterling Price had won the battle of Wilson's Creek in Missouri, August 10, 1861, which opened the way for General Price's northern advance to Lexington, Mo. , and his spectacular capture of Col. James A. Mulligan's Union brigade of 3,000 officers and men.

"Despite this General Price, who was not a West Pointer, was not liked by President Jefferson Davis of the Confederate States, and he appointed the fire-eating young Major General Van Dorn to outrank Confederate Brig. Gen. McCulloch, and Gen. Sterling Price of the Missouri state guard. "Had General Price and McCulloch been allowed to work together as they had in Wilson's Creek, the humiliating defeat at Pea Vine Ridge of the Confederate forces might not have occured.

"The Sac, Fox, or Iowa Indian scouts in their turn probably scalped the dead and wounded of fleeing civilized tribes after General Pike, in the confusion was compelled to order a retreat. The headlong fight of the five civilized regiments did not leave too many long-haired scalps for the Northern Indians to harvest.