,In 1908 there was meetings concerning a new Interurban Electric Railway. The proposed route of the railroad at that time was from Joplin, Missouri to Fayetteville, Arkansas. There wasn't a whole lot more talk on the matter until 1912 when a charter was granted to Arkansas Northwestern Railroad Company to run an interurban (trolley) train between Rogers and Bentonville. It was not until the spring of 1914 that the work got underway.

The railroad mainly used the Frisco tracks between Bentonville and Rogers, but the rail took off on its own tracks after entering into each city. In Rogers. the railroad line ran down the middle of 2nd Street, 1.1 mile to Cherry Street about a block from the Frisco depot. At this location they had a roofed  platform for people loading and unloading. In Bentonville, the tracks curved off the main Frisco line and ran down the middle of N.W. A Street. From there the train would stop at the Massey Hotel, then continue out to Park Springs Hotel. At the end of the line were a shop and a shed for keeping the train overnight. Where the line was built the streets were still dirt. They put down short tie right in the middle of the street. Wagons and what few cars there were had to drive straddling the railroad track. A Springfield company with John T. Woodruff did the actual work on the railroad.

Work on the train line was halted several times by injunction, once by the Rogers Light and Water Company, and also by the city of Bentonville. They were concerned that the that the tracks would disturb their water mains. The court ruled that if the city had complied with their own city ordinances that the tracks shouldn't disturb the water lines. The cities also felt that the railroad had no right running the tracks down the middle of the street but the courts gave them no help. 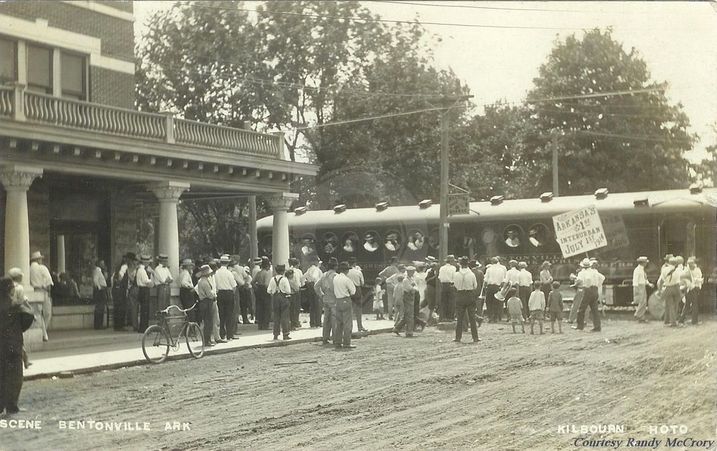 This image was taken of the first run of the Interurban. You can see a gentleman holding a sign letting us know this was the first trip. To the left in the photo is the Massey Hotel. The Massey had a ticket office for passengers wanting to ride the Interurban.
On July 1, 1914, several hundred Bentonville residents, accompanied by their band, made the first run to Rogers on the new motor car. Once in Rogers, there was an informal reception held. After that, the Rogers people traveled to Bentonville and had a picnic at Park Springs. On the return trip back to Rogers that night, 196 people were on the car with a lot of them standing! The cost to ride was 15 cents and the Interurban made seven round trips a day, but the motor car wasn't always reliable and would regularly miss some of its daily runs. The train was called a McKeen Car that was produced in Omaha Nebraska. There were only 152 of these made between 1905 and 1915. The train wasn't like anything that had been seen in Benton County before. The coach was painted red and had black and gold lettering and featured porthole windows. The motor was at one end of the coach and seating for 130 people (72 feet long inside) took up most of the rest of the coach space. There was a small room for baggage and mail. The total length of the coach was 98 feet long. The coach usually operated with a three man crew.

The owner of the line was J. D. Sutherland, who owned the end of the line in each community. He had purchased the Park Springs Hotel in 1913. The Interurban was the best way for Mr. Sutherland to get people to his large and wonderful resort. People who used the Frisco still needed to travel a mile to get to his resort, whereas the Interurban guests would be dropped off right at the hotel.

One time in 1915, a group of about 150 people were on the coach heading back to Bentonville from a carnival in Rogers. Someone had opened the train switch at the edge of Bentonville. When the coach hit the switch, it knocked the wheels off the car. Fortunately no one was injured in the incident, but most of the people had to walk home from there. A crew from the Frisco had to come fix the coach. Soon cars began to replace the Interurban as a form of transportation.

The first run left Bentonville at 6:15 in the morning and the last arrived back in town at 11:30. It would make stops at Park Springs Hotel, Massey Hotel , Arlan Spur, Apple Spur, then arrive at Walnut and Cherry streets in Rogers.  In the evening, the coach was usually full of people going to shows or for a visit. On days there were carnivals, baseball games, or a fair, every trip would be standing room only.

Eventually rates increased from 15 cents to 40 cents for a round trip and 21 cents for one way. It was an additional 5 cents to go from the Massey to Park Springs. The Interurban had their office and a ticket office in the Massey, but most people just paid when they got on the coach.

The motor car made its last trip on June 11, 1916, just a little less than two years after it started. The Frisco had ordered the car off its line due to non-payment of leasage dues. They had a 20 year lease with the Frisco but couldn't keep up with their bills. The operating company said they would pay the bill and the company would be back in operation, but before people knew it, the Interurban had been sold and sent to some location out to the west.

The next problem the cities faced was what to do with the railroad tracks. The city of Rogers condemned the tracks but it is believed that the city street department took up the track. The track was taken by creditors and sold as salvage to recoup some of their money. After the track was removed, 2nd Street remained bumpy for a long time. It's not certain what happened to the track in Bentonville, but this was the end of the short-lived Interurban motor car. 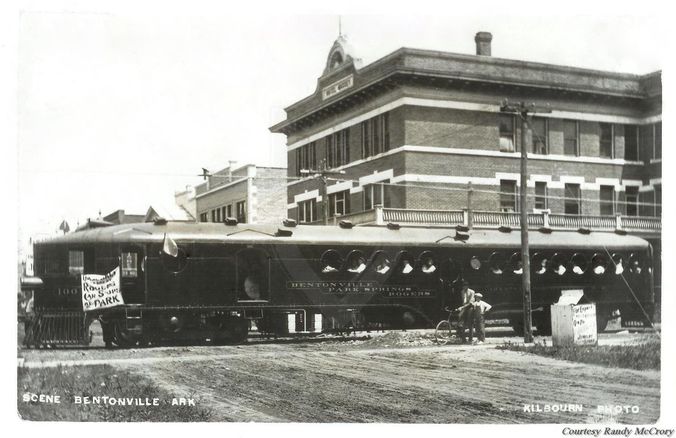