It Was a Great Day for a Hanging
(​but did the wrong man die on the gallows at Bentonville?)

It was a Great Day for a Hanging
By J. Dickson Black  (1960)
Bentonville, Ark. - The only legal hanging ever held in this northwest Arkansas community turned out to be the biggest get-together the county had ever had up to that date.

Scores of curious natives started to town the day before so they'd be there to see it. And by daylight on Jan. 14, 1876, the town was packed. All the stores were opened early and did a land-office business.

The excitement had started on Aug. 4, 1875, when Columbus Handcock was found murdered at his home near White Hollow.

Sheriff J. H.  McClinton soon apprehended Cornelius Hammon and G. P. Hoytt, both of whom were indicted for murder. The two men pleaded innocent, and Hoytt was found not guilty after being tried in neighboring Washington County.

But Hammon went on trial here [in Bentonville.] It was October, 1875, the courthouse had been in use only a year, and it was the first big case to be tried there. The courtroom and halls were jammed with spectators. 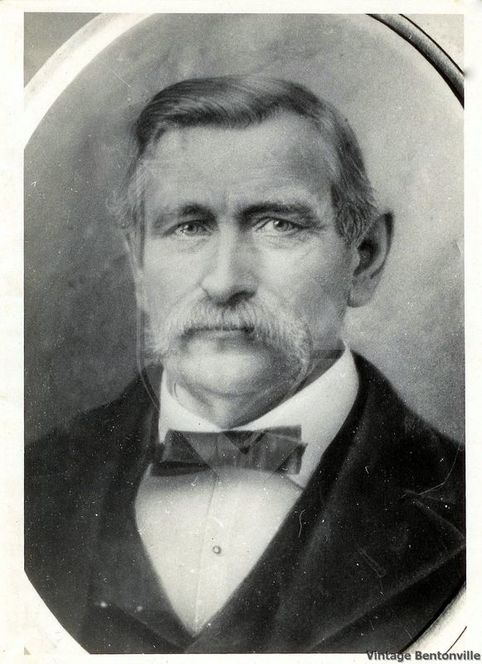 J. M. Pitman . . . Bentonville's Hanging Judge
One highlight of the trail came when John M. Peel, counsel for the defendant, claimed that from the kind of life and the clothing of the deceased, the jury could judge that he would not have been murdered for his money.

But Col. Sam Peel rose to his feet, looked out over the courtroom and spotted Uncle Hugh Middleton in the crowd. He asked Uncle Hugh, "The clothing worn by Handcock (the dead man) was no worse than that worn by Mr. Middleton. " he said. And he won his point. Everyone knew that Uncle Hugh, though no fashion plate, was one of the wealthiest men in the county.

The trial was a brief one, and the jury found Hammon guilty of first degree murder. Shortly afterward, Judge Pitman sentenced him "to be hanged by the neck until dead on the 14th day of January, 1876, between the hours of 10 in the morning and 2 o'clock in the afternoon at some point selected by Sheriff McClinton within two miles of the courthouse."

The scaffold was erected on a knoll just west of the Razorback Inn south of Bentonville about there the bypass now leaves Highway
71. Riding astride his coffin, Hammon was taken from the courthouse in a wagon about 10:30 that morning on his last ride. There was a huge crowd at the courthouse, and most of the folks followed the wagon out to the scaffold.

As the caravan moved along several townspeople passed the wagon in their rush to see the whole show.

And Hammon called out to them: "There's no use to hurry. Nothing is going to happen until I get there."

After he climbed the 13 steps and stood before the crowd, Hammon uttered his last words: "You are hanging the wrong man." Afterwards, some folks got to thinking maybe they did, but it was too late.

The story of the hanging has been told and retold by those who saw it. All seemed to think it had been a day well spent. Many of them took their lunch or bought food at one of the stores and had a dinner on the grounds.

The scaffold stood for more than 50 years as a reminder of what had happened there on that warm morning of Jan. 14, 1876.