John Clanton, One of Benton County's Last Blacksmiths
By Billie Jines (The Way I Heard It)
Pea Ridge Graphic - November 21, 1968
You might say that the man who made the burglary tools for the first bank robbery in Pea Ridge is one of the town's best liked citizens.

Of course, John Clanton didn't know he was making burglary tools at the time. He was accustomed to making dog-irons or steeple pullers or whatever the customers at his blacksmith shop ordered. When one designated a certain type of tool one day, he thought nothing of it. The customer asked him to leave it outside under a board where he could find it the next morning if he came by before Clanton was up.

The next day, when the burglary tool was described to the blacksmith, he figured his customer had been by before he got up all right - - probably around midnight.

And to this day, there are those in Pea Ridge who don't let Clanton forget that experience. In fact, when bank officials summoned him to repair the vault door from last year's robbery, there were fun-seeking bystanders jokingly recalling the incident of 33 years ago.

Except for what be calls "piddling around at the shop," John Clanton's blacksmith career stopped abruply one afternoon 10 months ago. He was working on an old school bus that a local man was converting into a camper when the attack struck. He knew he needed to see a doctor, and the doctor explained to him he just had just suffered a heart attack.

It was strange to Clanton to find himself closing the shop doors to his customers because of his health. A man of unusual strength, that shop had been the scene of many a hard days work. He had thrown many a cantankerous horse or mule by himself and hobbled it - - if there was no other way to shoe the animal. In fact, Clanton says that he never gave up on any horse brought in for him to shoe.

It was 1928 that he opened his first shop, at Brightwater, using only tools that he had made himself. The Clantons, both of whom had been reared within five miles of Pea Ridge, were married in 1931, and in 1934, they moved here. His first blacksmith shop - - actually, he was renting the building - but not the tools - - was located where the VFW hall stands today. Clanton made his own blower and was still using his hand-made tools. That same year, he rebuilt and reset 144 wagon and buggy wheels.

At that time, there were two blacksmith shops in Pea Ridge - - - Harve Rickett's and Clanton's. Later, after Rickett's was gone, Doc Brown operated that one.

A great one for practical jokes, Clanton particularly enjoyed pulling jokes on his competitor, Doc Brown. He recalls a poker that Brown  had made with  a fancy handle. It was just too much for Clanton. One day, when Clanton caught Brown busy in another part of the shop, he stuck the end of the poker into the fire- - - along with another piece of metal. When both were red-hot, he pulled them out and with a single lick of the hammer, firmly affixed the piece of metal to the tip of the poker. He walked casually out and left the poker lying there to be discovered by Brown. 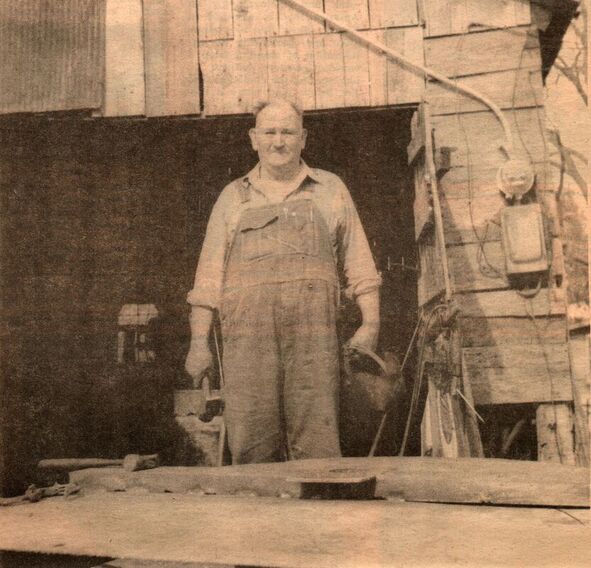 Pea Ridge Blacksmith John Clanton was caught by the camera as he stood in front of his blacksmith shop on McColloch St. tools in hand, preparing to spend a little time working on a brush-hog (seen in foreground)
Horseshoing was a major part of blacksmithing in those days, with seldom a day passing without Clanton putting on at least eight shoes - - or a team of horses. On one memorable occasion, he put on 33 shoes in a single day.

There was little time for building other things in the shop - - although, admittedly, the checkerboard was always set up and in those days, bad weather found the blacksmith shop the social center of town for the men folks.

As the farm horses gave way to the machine age, Clanton little by little, found his effort turning to other work in the shop. This included such things as hundreds of gates, many, many tools, trailers, fertilizer spreaders, etc. Over the years, Pea Ridgians learned to bring their problems to Clanton - - if those problems involved metal work. For instance, the blacksmith built the first lowering device the local funeral home ever had.

One local admirer of the blacksmith complimented John Clanton's work one day recently, declaring that Clanton is one of the best welders in this section of the country.

"But," the man added, "The best way to get Clanton to do a job you needed done, back when he was able to work and was covered up with jobs needing to be done, was to tell him that someone had said that that particular piece of metal work couldn't be done. John would show you right away that it could, too."

Through the years, Clanton began finding more need locally for such things as brushhogs, and he began building these on his own. He has built 30 - - and the longest he ever kept one before he sold it was three days! He has also built 25 power post hole drillers and each has sold quickly upon completion. A head gate he designed (and built four of) is currently in Tulsa where proceedings are underway to have it patented. The headgate is designed for use in dehorning cattle.