Keith Grew  Famous Apples by Barbara Rudolph
Pea Ridge Graphic, 1966
Mr. and Mrs. Loyd Keith of Hiwasse, route 1, have in their possesion a gold medallion that gathers value with the years. The medallion was presented to Loyd Keith's father, John Henry Keith, in 1904 by the members of the St. Louis World Fair for a select and superior 24 barrels of Ben Davis No. 1 grade apples. A large check was also presented to the Keiths when the wooden kegs of apples arrived to be displayed at the Fair.

The Keith Orchards covered 400 acres, the largest orchard in the state and one to go down in history. During 1919 they averaged 250 barrels a day from the well tended trees. Fertilizer a process relatively unknown then, was shipped in by rail car at an unheard price of $25 per load. To this day Loyd Keith asserts this is a factor in the quality and quantity of the Jonathan, Red Ada, Gano, and Ben Davis apples they then produced. Each barrel brought a high bid of $8.50 a barrel. 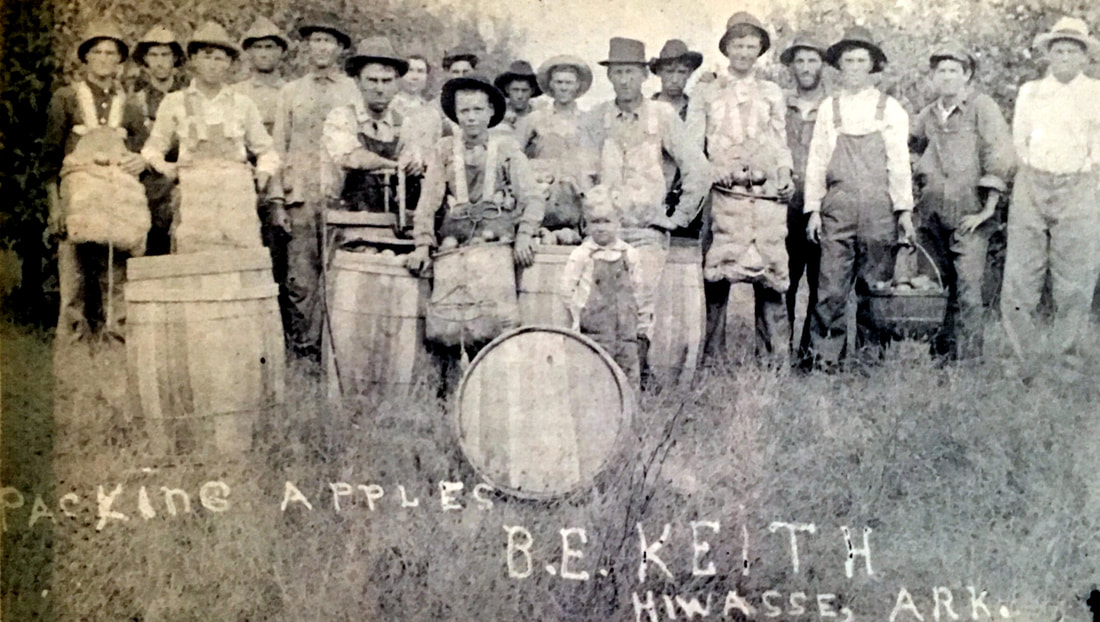 This is the only image I could find of the Keith's farm. This was taken from a newspaper.
​Vintage Bentonville hopes to someday find this postcard or one like it.
The late Henry Keith was instrumental in procuring the roads and mail route now used in the Hiwasse area. He circulated petitions and was constantly working to get better roads as well as obtaining a cold storage plant in Bentonville for the area apple growers. The plant is no longer in operation as a cold storage house. A team of matched white horses were used to pull a hearse at one time, were bought and used in the orchards. They were insured for a fantastic $550.

The Keiths made heavy use of the railway that was brought to the Hiwasse point the year the Keiths moved to the area. "When we hauled apples," Loyd Keith, now 73, recalls, "We drove wagon teams over roads that were mere trails or "pig paths", he quipped. "The railroad meant a lot to the apple industry. The war created a steel shortage and the apple industry withered until finally in about 1910, the Kansas City Railroad was dispensed with all together. The old depot was a landmark for a long time until it had to be torn down." Loyd Keith has a son, Hurshel Keith and a daughter Mrs. Geneva Dreisoener both of Gravette.

Somewhere around 1936 frost killed the heart of the apple tree; insects and age further damaged them until soon the apple industry which had provided livlihood for so many in this region dwindled to nothing.

​"The Hiwasse Apple Era will not soon be forgotten." Keith said. "I haven't given it up completely," I still have three bearing apple trees.