Life Of Christ In Paintings
​at Siloam Springs

Christ's Life Shown In Paintings
Photos by J. Dickson Black, Story adapted from J. Dickson Black's writings.
Several decades ago, Siloam Spings would set up a set of scenes during the Christmas season called the "Pool of Siloam." It was an illuminated pictorial presentation of the life of Christ. The 13 scenes showed from Jesus's birth through his death and resurrection. They were placed along the shore of a beautiful little lake in Siloam Springs. The bank is 450 feet long and 50 feet high. A 15-foot figure of the Master stood at the top of the hill overlooking the scenes.

The idea of the Pool of Siloam was originated in 1956 by the late R. S. (Swede) Knowlson, then editor of the International News. That year Knowlson and the artist/sign painter Burtice Woody put up a nativity scene with 17 figures on the lake shore. A few more pieces have been added each year after. 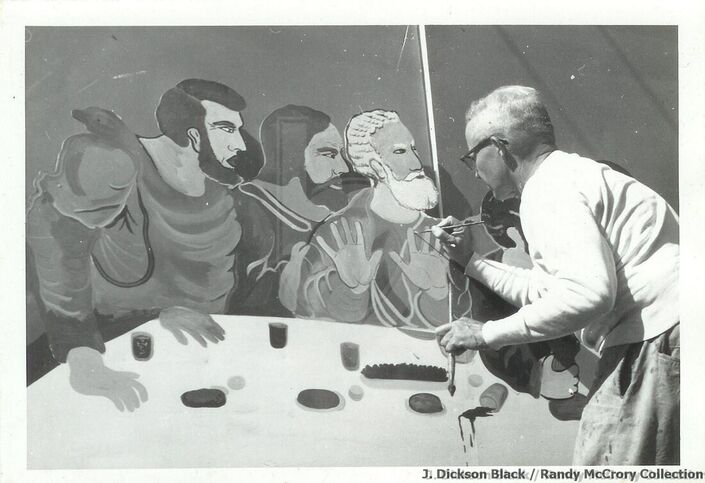 Here is Burtice Woody working on a painting of the Last Supper
In the spring of 1959, the Chamber of Commerce took over the job of raising money to complete the project as it was originally planned. This kept artist Woody busy sketching, building and painting the for nine months to meet the December deadline.

Life-sized and larger figures were used throughout. In all there were over 50 figures in the 13 scenes. The 15-foot figure of the Master was the tallest. 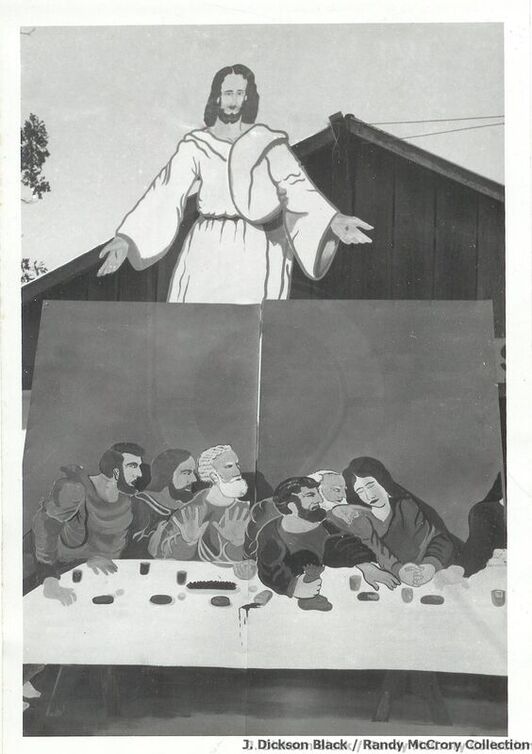 This is an image of some of the 50 figures that were painted by Mr. Woody. The 15 foot tall Jesus image sat at the top of the hill.
This was a big undertaking for Burtice Woody, who had started sign painting four years earlier. He spent hours studying the Bible and pictures before painting any of the scenes. 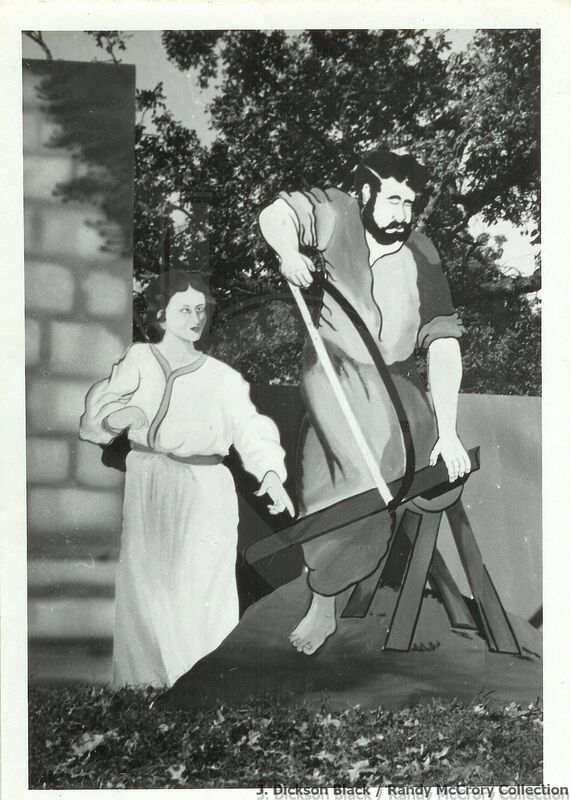 Here is one of the painted images of a young Jesus working in His father's carpenter shop.
There were over 400 man hours of work in the paintings and building of the figures alone. Twenty-six gallons of paint were used.
"Its has been a pleasure making this," said Woody, "and it somehow has help me understand the Bible a little better." 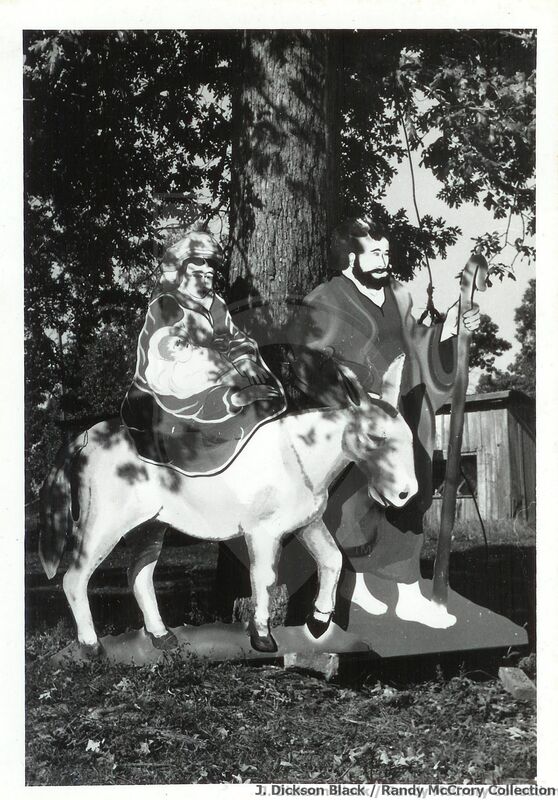 This is a painting of Joseph and Mary on the way to Bethlehem, where Mary would give birth to the baby Jesus
John Brown University of Siloam Springs took care of the lighting and tape recording.  They used 60 spot lights and several thousand feet of electrical wire.

There was a recorded narration and musical background. The program lasted about 30 minutes. It would repeat four times each night. The program started at 7 p.m. each evening. Each presentation began with all the lights out. Then the lights would come on for scene one, then scene two, and so on until all the scenes were lit. After 9 p.m. the lights were just left on for those who wanted to just see the displays. 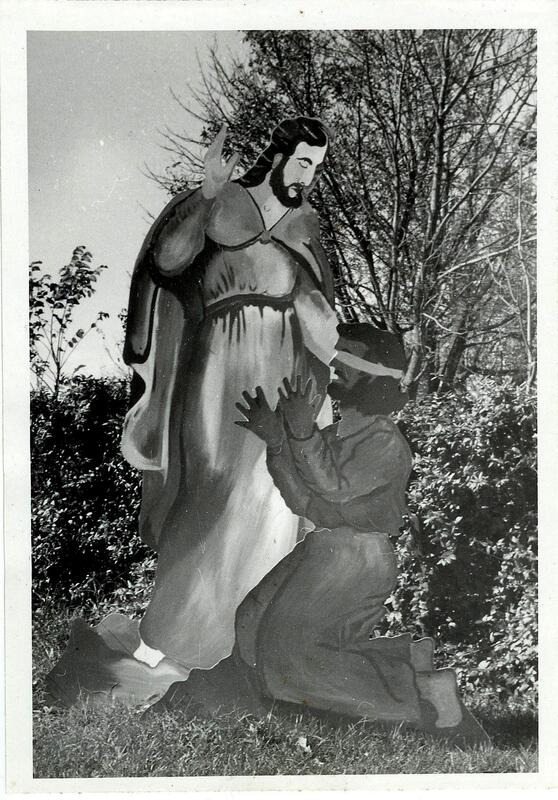 The healing of Saul (Paul) by Jesus 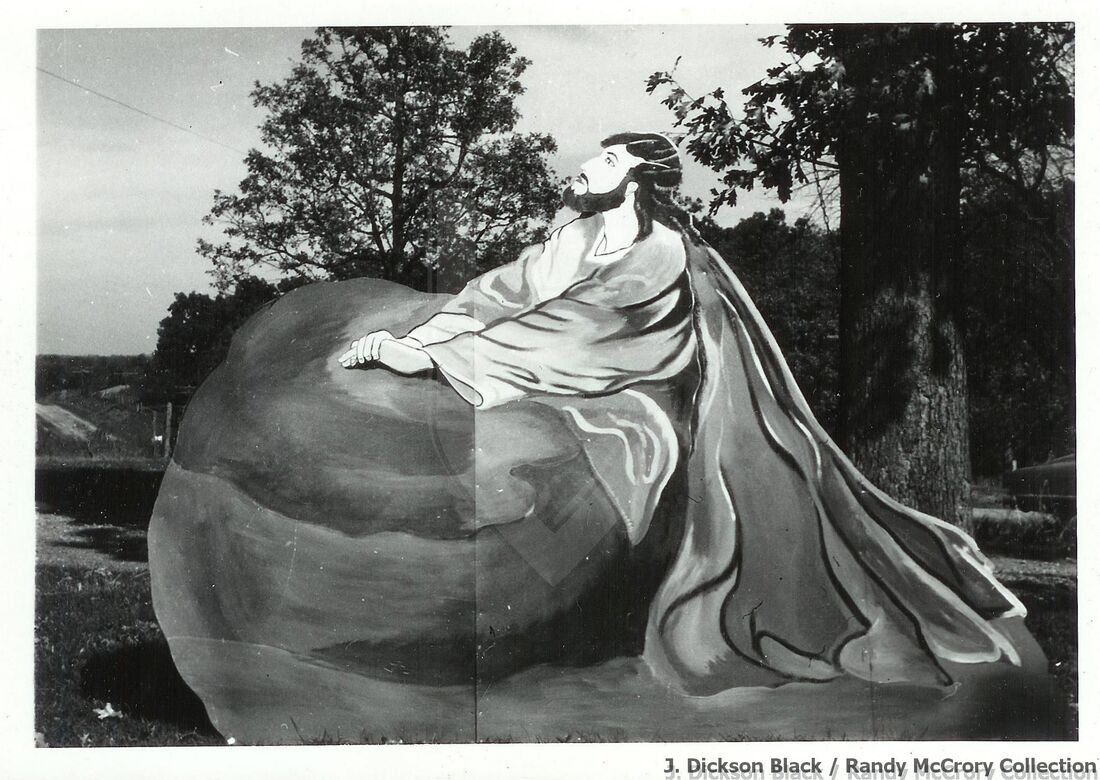 Painting of Jesus praying in the Garden of Gethsemane
The Pool of Siloam was built on a little lake from the creek that ran behind what was then the Chamber of Commerce building.
​