George T. Lincoln was a member of the clothing firm of Lincoln & Arthur, of Bentonville, Arkansas, and the son George and Julia A. (Gaitwood) Lincoln, and was born in Clay County, Missouri, on October 9, 1836. His father, George Lincoln, was born in Scott County, Kentucky, in 1792, was of German descent, and was the son of Thomas Lincoln, who was a native of Virginia, and first cousin to Abraham Lincoln. George Lincoln was reared in Kentucky, whither his parents had moved at a early date, and in 1821 he immigrated to Clay County, Missouri, purchased a farm of 320 acres, which he cultivated and which to this day [as the biography was written in 1899] is in possession of wife Julia A. (Gaitwood) Lincoln. Mr. Lincoln afterward became owner of 480 acres. He was a soldier in the War of 1812, and was in the battle of Raisin River. He died in 1852 at Council Bluffs, Iowa, while on his way home from a medical treatment at Fort Pier. His wife was born in Scott County, Kentucky, in 1802, and is of Scotch origin. She later resided on the old home place in Clay County, Missouri, and was at this time [1899] eighty-six years old. She was the mother of thirteen children.

George T. was reared on the farm and remained with his mother until twenty-one years of age. He was educated at William Jewell College, his mother being one of the original subscribers to the fund of the institution, and graduated in the English course and mathematics. After reaching his majority he commenced merchandising in Clay County, Missouri, and at the end of one year sold out and returned to farming. He tilled the soil for about a year, and with the war breaking out he enlisted in Capt. Price’s company. He was in the battles of Lexington, Elk Horn, Corinth, Iuka, second battle of Corinth, Jackson, and afterward a scout under Joe Blackburn, later Senator of Kentucky. He was captured in front of Vicksburg, and retained twenty-nine days in the city. He was slightly wounded at two different times, and was in service four years and two months, surrendering at Grenada, Mississippi.

Previous to the war, he married Miss Virginia M. Pryor, who was born in Kentucky in 1844, and to them was born one child. Mrs. Lincoln died in 1861. After the war, Mr. Lincoln located in Nebraska City, Nebraska, and in the freight business until 1870, when he went to the Indian Nation, near Ft. Smith, Arkansas, and followed farming and trading for six years, when he returned to his birth place.

​Mr. Lincoln passed away January 24, 1923, and is buried in the Bentonville Cemetery 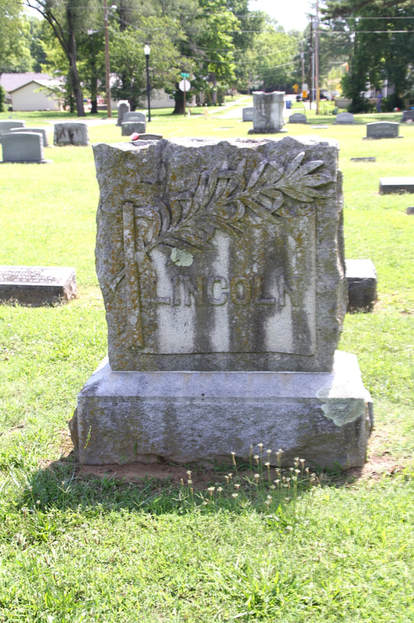