The first census of old Lovely County was recently uncovered in the archives of the Arkansas History Commission at the Old State House in Little Rock, by Ted Worley, director. This census was made in 1829 by Sheriff Lewis Evans, and it covers Northwest Arkansas.

There is no doubt about it, the job of taking a census of old Lovely County in 1829 was a difficult one; we hope the sheriff had a horse ride from one section of the county to another. Even though he had had a horse, it is not reasonable to assume that he visited different areas in the county to make the census. We believe that the census was made through the sheriff's contacts with acquaintances in the southwestern part of the county, from families traveling up the old Line Road through Evansville and stopping at his store and there relating to Sheriff Evans their plans to settle in Northwest Arkansas, or from information he received from those persons attending the three terms of court held during the year 1829 - in March, July and December. We cannot conceive that the sheriff would or could make a house-to-house canvass.

In 1829, any census would have been complete for only a day at a time; pioneers were establishing their homes in Northwest Arkansas rapidly. Families were moving to this section by way of at least four roads or trails, from the Indian Territory which entered near Maysville, Cherokee Ageny, Cincinnati and Evansville; four roads from the south, the old Line road, two from Van Buren to Fayetteville and one from Ozark north through the White River valley to Huntsville; from the east by way of Shawneetown (Yellville) toward Huntsville; and south from several entrances across the Missouri line, from Elk Springs Mill through Sulphur Springs by way of a road a few miles west of Gateway, and by way of a road entering the county northeast of Eureka Springs. In all probability Sheriff Evans did not keep a man posted on these roads. 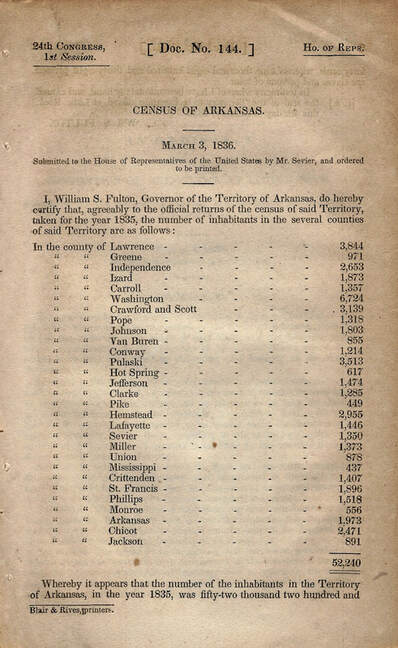 Here is a 1935 census of the state of Arkansas. You will notice that there was no Benton County because the area was still a part of Washinton County. It wasn't until 1836 when Arkansas became a state that Benton County came to be. In the 1935 census, the population of Washington county (including the future Benton County) was 6,724. The same area today holds over 500,000 people.
The sheriff's Census of 1829 contained 231 names. Apparently, only the names of the "head of the house" were listed. All of the names except 13 are men. For instance : Martha Billingsley is listed; her husband passed away during their first night in the county.

Family names appearing most frequently in the census are Billingsleys and Friends; Billingsley is listed seven times, including Martha, with the same number for Friend. One family name, Buchanan (the sheriff used the spelling as Buckhanan), has six entries. As for this family, we know  that Rev. Andrew Buchanan, together with his wife and step-children, arrived on Cane Hill September 3, 1829, yet he is omitted from the census (Mr. Buchanan built his home near the spring in Mock Park at Prairie Grove).

Other family names entered several times in the census include: Blair, 5; Graham, 5; McGara (McGarrah), 5: Mars (Marrs), 5: Reed, 5: Williams or William, 5; Click (the log cabin home of Peter Click was the background for the picture, "The Arkansas Traveler") 4: Johnston (may have included a Johnson), 4; and Wilson, 4. There are many surnames appearing two and three times. Some of the group were brothers, some fathers and sons, and some of no relation. 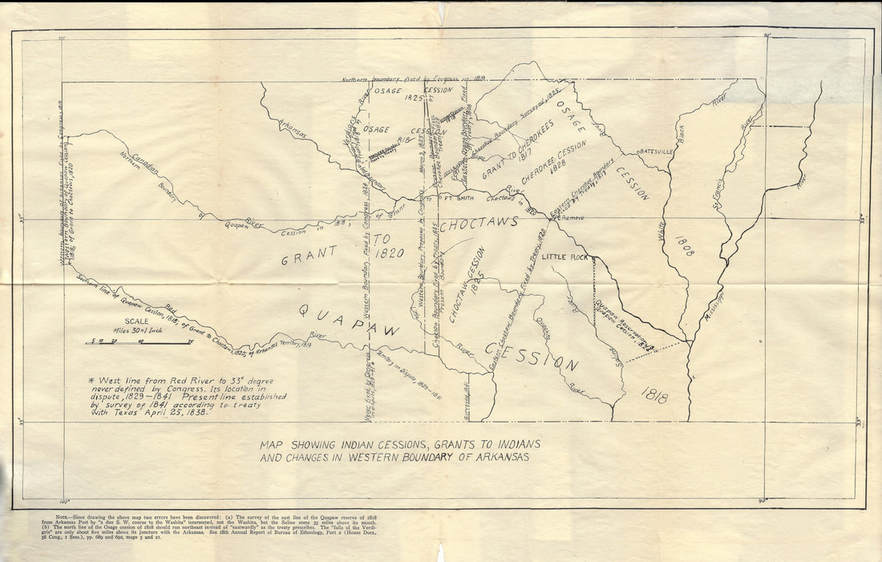 This is a map of the different changes of indian boundaries over time.
Even though Sheriff Evans may have been unable to present a complete census without error, the information he did reveal has been valuable to persons interested in the early history of Northwest Arkansas. Considering the number of families settling in the county as given in the census, and the location of where they built homes, (derived  from other sources) there was not much sign of a concentration of the population into communities.

​The complete list of the settlers to Lovely County can be found online.