G. L. (George) Maples was a popular and efficient sheriff of Benton County and a member of one of the well known pioneer families of the state. He was born in Bentonville, Arkansas, in 1881, a son of Daniel and Marlissa (Campbell) Maples, both whom were natives of Carroll County, Arkansas, when their marriage occurred. Shortly after the close of the Civil War, they came to Benton County where for a number of years the father followed the occupation of farming. He became one of prominent men of his community and was called to public office, serving as deputy sheriff of Benton County for more than four years. He was later appointed deputy United States marshal and went to Oklahoma in search of horse thieves. While crossing a log over a stream near Tahlequah, Oklahoma, he was shot and killed from ambush by Ned Christy, the noted outlaw, his death occurring on May 5th, 1887. He was a member of the Baptist Church and his political allegiance was given to Democratic Party, while fraternally he was identified with the Masons. Mr. and Mrs. Maples had six children.

The educational opportunities of G. L. Maples, were limited, as it was necessary for him to aid in supporting his mother after his father’s demise. He found employment at farm labor, later renting land for a number of years and subsequently purchasing a small farm. While engaged in cultivating his farm he spent about six months each year on the road as a fruit salesman, and during that period he also acted as a deputy sheriff. On the 20th of November, 1916, he took up his residence in Bentonville and in August, 1920, was elected sheriff of Benton County, receiving more votes than the Independent and Republican candidates combined at the primaries, thus indicating his popularity in the district. He is said to be one of the best sheriffs the county ever had. The thoroughness with which he performed the tasks that devolved upon him made his name a menace to evildoers, while it carried with it a sense of security to all law-abiding citizens.

In March 1898, Mr. Maples was united in marriage to Miss Emma Browning, who was born in southwestern Missouri, a daughter of Thomas Browning, who later resided on a farm in Benton County. To this union three children were born.

Mr. Maples was a staunch Democrat in his political view and his fraternal connections were with the Masons and the Modern Woodmen of America. Earnest, self-denying labor was his lot of early manhood, but with ambition and the ability to work his way upward he steadily progressed along the lines of general usefulness as well as individual success. He was fearful, prompt, and efficient in the discharge of his official duties, and in the county where he spent his life he enjoyed the warm rewards, esteem and goodwill of an extensive circle of friends.

​George Maples passed away January 1st, 1961, and is buried in the Bentonville Cemetery.

Adapted from: Centennial History of Arkansas - 1922 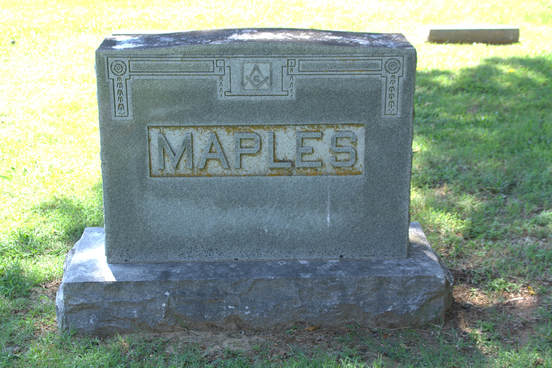