Careful in choosing their public officials, Arkansas has usually had most capable men to administer her public business and the results achieved, therefore, have contributed to her continued growth, development and prosperity. Deserving of classification with those most loyal to the interest of the commonwealth in public affairs, is William Thomas Maxwell, who was state bank commissioner, with office in Little Rock. He was a native son of Arkansas, his birth having occurred in Bentonville, Benton county, on the 22nd of February, 1872. His father, Leander Maxwell, was also a native of the same county, his birth having occurred in 1842. He always resided within the borders of that county and remained one of its honored and highly respected citizens. At the time of the Civil War he joined Price's command and was at the front throughout the period of hostilities. He was captured at Corinth, Mississippi, and held as a prisoner of war for five or six months, after which he was paroled and saw no more active service. In days of peace he always gave his attention to agricultural pursuits and was one of the well known farmers of the northwestern part of the state. His political endorsement was ever given to the democratic party. It was in 1866, in Benton County that he married Emmeline Maxwell, who was born in that county, in 1846, and who died in May, 1902. They had become parents of six children.

William Thomas Maxwell, the third in order of birth in the family, acquired his early education in  the schools of his native town and afterward became a student in Mount Vernon College in Pea Ridge, Arkansas, where he was graduated in 1893 with a Bachelor of Arts degree. He afterward took up the profession of teaching and was always a stalwart champion of the cause of education. From 1896 until 1900 he was superintendent of schools in Benton County, Arkansas, and was again called to public office when in 1906 he was made clerk of the circuit and chancery courts in Benton County, occupying that position for four years, or until 1910. In the meantime he took up the study of law with the intention and purpose of becoming an active member of the bar and pursued his readings until admitted to practice before the courts of the state in 1910. He then at once entered upon the work of the profession, opening a law office in Bentonville. Benton County, and remaining in active professional work until 1914, when he was appointed to a position in the Arkansas state banking department, thus serving until April 1, 1919, when Governor Brough appointed him state bank commissioner to fill out the unexpired term of A. J. Reap, who resigned. His previous experience with the state banking department, combined with his knowledge of legal principles and especially the law relating to banks and corporation, made him splendidly qualified for the prompt and efficient discharge of the duties that devolved upon him.
​ 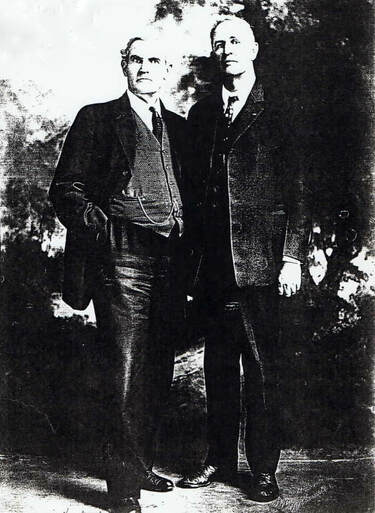 Sons of Calloway Leander Maxwell and Emaline Maxwell: William Maxwell and Thomas  James Henry Maxwell
On the 20th of June, 1896, Mr. Maxwell was married to Miss Geneva Gholson, who was born in Benton County, in 1874, and there died in February, 1902, leaving a daughter, Lorea, who later became the wife of Frederick A, Pope of Little Rock. Mrs. Maxwell's father was born in Benton County and served as a soldier in the Confederate army during the Civil War. About six years after the death of his first wife. Mr. Maxwell was married in June, 1908, at Eureka Springs, Carroll County, Arkansas, to Mrs. Minnie H. Caldwell, a daughter of mr. amd Mrs. Herman, the latter dying during the early girlhood of Mrs. Maxwell.

Both Mr. and Mrs. Maxwell attended the First Church of Christ Scientist, of which organization Mrs. Maxwell and Mrs. Pope were members. In politics Mr. Maxwell was always a democrat and while active in party management, the recognition of his ability on the part of fellow citizens led to his election for important official service. Fraternally he was a Mason, having taken the degrees of both the York and Scottish Rites and in his life he exemplified the beneficent spirit and purpose of the craft. All all times he received and enjoyed the high respect and confidence of his fellowmen because of his devotion to duty and by reason of the possession of those social qualities which makes for strong friendship.

Mr. Maxwell passed away on Oct 20, 1946. He is buried in Hart Cemetery in Rogers, Arkansas.

​Adapted from the "Centennial History of Arkansas, 1922"