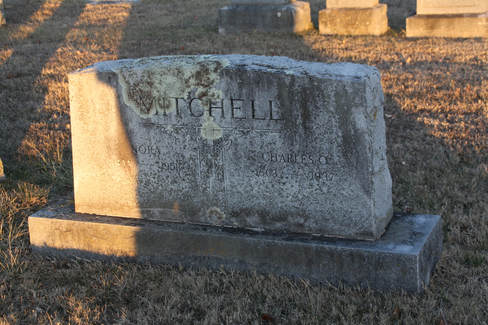 Charles O. Mitchell – The success achieved by Charles O. Mitchell in the industrial world in Bentonville, Benton County, Arkansas, is a distinctive order and it is the more gratifying to contemplate inasmuch as it is the direct result of his own well applied energies. Mr. Mitchell, though not a native of Arkansas, lived most of his life in the state. He was the proprietor of the Charles O. Mitchell & Company’s marble business in Bentonville, a concern that has contributed liberally toward the prosperity of the city.
Mr. Mitchell was born in Harrison County, Missouri, on January 1, 1863, and was a son of Zachariah Mitchell who also later lived in Bentonville. They moved from Missouri in 1867. The father was long engaged in a butcher business in Bentonville and only retired from active participation in the business affairs when loss of sight and the added weight of years necessitated such a step. He was born in Missouri, in 1837, and gave valiant service in the Union Army during the Civil War, as a member of the Home Guard. Mr. and Mrs. Zachariah Mitchell were the parents of seven children.

Charles O. Mitchell received his rudimentary educational training in public schools in Bentonville and when he had attained to the age of nineteen years, he went to St. Louis to finish his trade as a marble cutter. He entered the employment of Bradbury Marble Company in that city and remained with that firm until 1903, when he returned to Bentonville and initiated his independent efforts in the marble business.

On October 6, 1905, Mr. Mitchell was united in marriage ti Miss Nora Fields, who was born and reared in Arkansas, and whose parents originally came from Tennessee. Mr. and Mrs. Mitchell have two children from this union.

From small beginnings in what was the old Eagle Hotel (where the Massey now sits), he gradually extended his trade and scope of operation, buying out all competitors and business rivals in the city, and stood supreme in the marble and tiling business in this place. Mr. Mitchell was recognized as a man of extraordinary executive ability and unquestioned integrity. He built up his admirable success through fair and honest methods and his record will bear the searchlight of the fullest investigation.

In his political persuasion, Mr. Mitchell was a loyal Democrat, and he was in 1910 serving the fourth ward of Bentonville on its board of aldermen. In the Masonic order, he was a member of Bethany Commandery, Knights Templar, and he was also affiliated with the Knights of Pythias and the ​Woodmen of the World. His religious faith was in accordance with the tenets of the Methodist Episcopal Church South, in the various departments of whose work he and his wife were most active factors.

Mr. Mitchell passed away in 1937 and is buried in the Barron Cemetery in Bentonville.

Adapted from the Historical Review of Arkansas by Fay Hempstead  (1911)