Arkansas Fiddlers' Contest at Monte Ne
Something About One Being Promoted by "Coin" Harvey
From the Arkansas Democrat June 6, 1901
A unique entertainment will take place at Monte Ne on Thursday, the 20th day of this month. It is a fiddlers' contest, and if one has never seen one of these gatherings it will pay to travel many miles to see it. Some with coon-skin caps, others with cow-boy hats, or squirrel rifles, and yet others dressed in the height of fashion, and all with fiddle and bow, experts in their way, will meet, as it were, in a convention of fiddlers to try their skill, and before judges let it be determined which of their number is the best fiddler.

The programme will begin at 2 p.m. with an address of welcome by W. H. (Coin) Harvey. Mr. Harvey will be followed by Hon. George Sengel, of Ft. Smith, whose subject will be "The Occasion." The contest will then be on, and will probably last two to three hours. At 6 p.m. there will be a banquet in the dining-room of the Hotel Monte Ne. During the progress of the banquet the judges will deliver their opinion, awarding the premium, a silver-headed cane, to the one they regard as the best fiddler. There will be speech-making at the banquet, and at 9 p.m. it will give way to a country dance that will go on until the wee small hours of the morning. 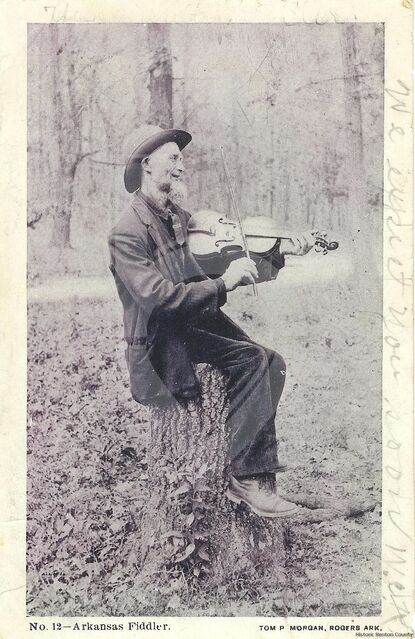 This postcard was used to promote the Monte Ne fiddlers' contest which went on for many years. We actually know the name of the person on the postcard, George Wisely. The funny thing is that he never played a fiddle, but was only used to make this postcard.
Banquets are for men only, and this one will be no exception. The custom has risen out of the fact that the presence of ladies serves as an embarrassment to the men, and when ladies are present the gentlemen do not easily enter into a jovial good time. On this occasion one may expect to hear all the good anecdotes on Arkansas fiddlers since the days of the "Arkansaw Traveler."

The rules of the fiddler's contest will be as follows: Each will be instructed to play "The Arkansaw Traveler." After that they will play tunes of their own selection. The judges will be selected from men accustomed to fiddle music and who call it the fiddle. No one will be regarded as competent to serve as a judge who is in the habit of calling it a violin. The fiddler  whose music has the greatest influence in reviving sentiment in the breasts of the audience, and which has the greatest effect on the muscles of the lower limbs and of the feet will be most apt to get the prize. Ladies accompanying the gentlemen and registering at the hotel will be served with supper in another dining-room. 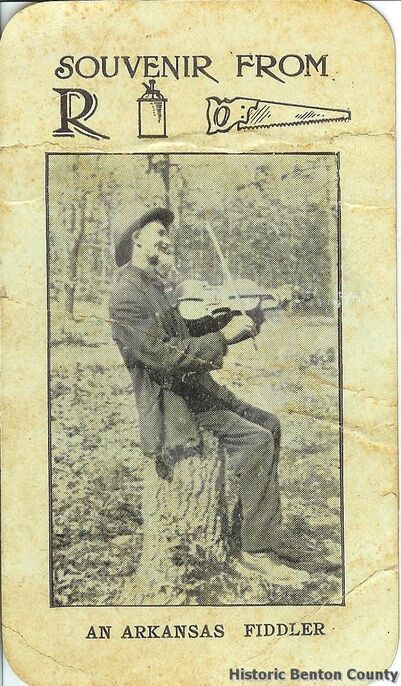