...."one of my spies fell in with some rebels who stole our wagons 10 miles out on the Fayetteville road. The spy pretended to be secesh and they told him (the spy) that Price was moving on us;........

"This may be only a feint but we had better unite our forces at Sugar Creek, and be ready for any occasion. Our stand must be at Sugar Creek, where I hope to join you tomorrow."

Curtis, with this order, officially established the Little Sugar Creek as the Federal defensive point to meet the advancing Confederates.

On February 16th the Federal advance had crossed into Arkansas pushing the Missouri State Guard (Confederate) before them. While the southerners continued their retreat, Curtis established a temporary headquarters near Little Sugar Creek. Here he waited until the rest of his army had moved up and here he developed plans for  future activity in Northwest Arkansas.

By the end of the month the forces of General Sterling R. Price had joined with those of McCullough and McIntosh encamped in the Boston Mountains. This army of Missouri, Arkansas, Texas, and Louisiana soldiers, to be joined by 900 Cherokee Indians, was now under the command of Major General Earl VanDorn. His broad plan of movement was to march north into Missouri and, if meeting with success, to take St. Louis. 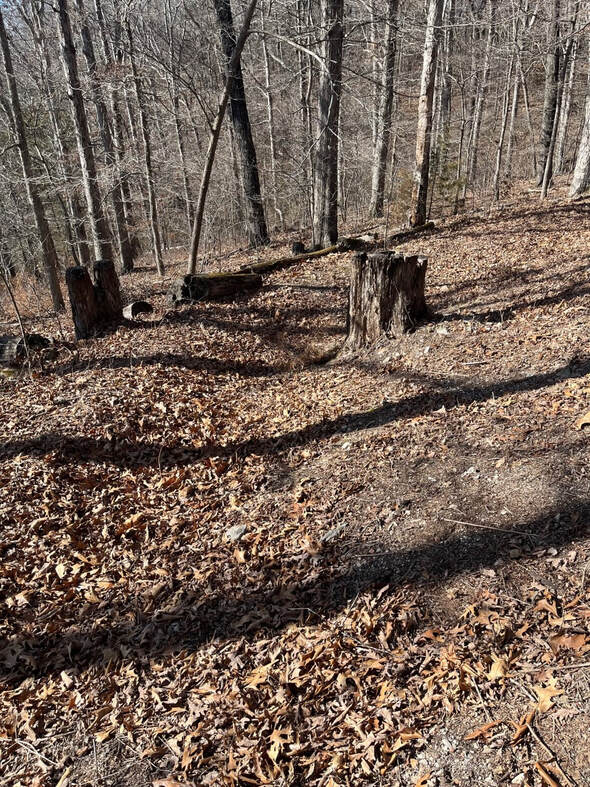 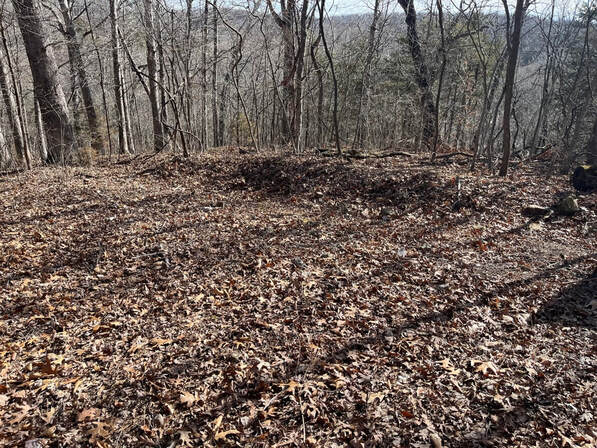 These photos were just taken this week. You can still see the earthwork built by Fedral soldiers a hundred and sixty years ago. But if you plan to go see these its a up hill hike.
The beginning of this march was the intelligence that had been reported to Curtis. The Union army was in a difficult position. Advancing toward them was a large, undefeated army and the Federal supply base at Rolla, Missouri was a long distance from their present location.

Partly because of this supply problem Curtis spread his army over a wide expanse of Northwest Arkansas. This enabled foraging parties to range farther afield and made the smaller units fairly self-sufficient.

It also meant that these widely separated units were vulnerable to attack. Curtis reported several such incidents to the Union commander in the west, Major General Henry W. Halleck. As an example his February 28th dispatch reported the following action:

This combat patrol of Texans had broken through his insufficiently manned security cordon nine miles west of Cross Hollow.

By early March he drew in the various elements of his army and began strengthening the natural defensive features of the Little Sugar Creek site. Because of its location, at the point where Telegraph Road crossed the Creek and a general command of the country to the south, military consensus would naturally suggest its use for a defensive position.

Curtis reported, ..... "the valley of Little Sugar Creek is low and from a quarter to a half mile wide. The hills are high on both sides and the Telegraph road from Fayetteville by Cross Hollow to Keetsville intercepts the valley nearly at right angles."

​It, therefore, seemed to Curtis that the Confederates in their northward march on the area's main road would move directly into the Federal trap. The Union artillery and troops would be ranged on the north side of the creek at the base of the bluffs and 120 feet up on the crest.

One of the men assigned to the 59th Illinois described this activity as the soldiers prepared the defenses:

...."The first order was to build earthworks on the hillside and get the artillery into position as this slope faced the south and thus commanded the direct approach of the rebels. It was a most tedious and difficult work. Up through the heavy underbrush over the rough uneven surface the men pulled their heavy guns by means of long ropes."

The first units in place at Little Sugar Creek were under the command of Colonel Jefferson Davis. Corporal Samuel P. Herrington of the 8th Indiana wrote in his diary, .... "Struck out from Cross Hollow on the morning of the 1st (March) and marched back to Telegraph Road. We went into camp about 6 o'clock. Had a fine day's march of only 12 miles."
On the following days his diary reflects the life of a soldier in camp, without, at least for him, the pressures of war. They played a game called Bull Pen, and much to Herrington's relief did not, "drill."

This relaxed period came to an end as he indicated in his diary accounting of March 6th.

...."Last night about 12 o'clock we were called out. General Curtis came riding by or through our camp and ordered us to cook 2 days' ration for Price's army was advancing on us."...

...."Had our breakfast early and at 9 o'clock we were ordered to move back on the crest of the hill just in our rear on the west side of the Telegraph road."....

The position of the 8th Indiana was located at a location now found in the detached area of Pea Ridge National Military Park. As today's visitor ascends the paved trail to the bluffs and walks along the trench line he is seeing what is left, after all these years, of the soldiers' work.

Herrington's diary continues.. "we threw up a brest work on the hillside. We had plenty of material to make our work good. "....

Many soldiers did not find the availability of material so beneficial. A 59th Illinois man wrote, ....."The hill on which the 59th is camped is 200 feet above the bed of Sugar Creek in the valley below, and seems to be composed of millions of little rocks thrown together in one huge pile. Its surface is literally nothing else but fragments and pieces of stone... and these the soldier must have for his bed..."

The preparations went on at a rapid pace and by late evening of the 6th the Union army, following the retreat of Brigadier General Franz Sigel's troops from the Bentonville area, was in place on Little Sugar Creek.

News of this activity by the Federals caused the Confederates to change their plan of operation.

Van Dorn determined to see if it were possible to maneuver the Federals out of their earthworks. Two of his Generals, Benjamin McCullough and James McIntosh were familiar with the countryside. From them Van Dorn learned that there was a road branching off to the left some miles to the west of the Little Sugar Creek, Telegraph Road Junction. This road, known as the Bentonville Detour, would allow the Confederates to bypass the union forces, move behind Pea Ridge, and then attack southward down the Telegraph Road. They would be in the rear of the Federals and astride their supply route from the north.

​Seizing upon this plan of action, Van Dorn ordered his army to make a night march and on the morning of the 7th, the battle was joined at Pea Ridge, somewhat over 2 miles from the Little Sugar Creek site. The Federal soldiers hurriedly left their hastily built fortification and moved to meet the Confederate advance. Little Sugar Creek was not to be the scene of battle.

During the last year [in 1969], the National Park Service constructed a ten car parking area and a foot trail to the bluffs. This site is of particular interest to today's visitor containing, as it does, the only visible remains of the Pea Ridge battle with a direct connection to the Civil War soldiers.

There has been considerable concern by the Park staff over misuse of this extremely valuable, historical land. A few people, not perhaps realizing the worth of the site not only to the area but to the nation, have dumped refuse on and adjacent to the road shoulders that lie within the area.

Others have ridden or have driven vehicles up the foot trail to the bluffs. Not only is this a secacreation to the intent by which this land was set aside, it is in open violation of Federal regulations prohibiting vehicular use on this type of trail.

For the immediate future, while awaiting availabitity of funds for completion of the construction projects, this part of the Park will be open informally, that is to people who have knowledge of the Little Sigar Creek site or who make request at the Park's visitor center for direction to the access road. 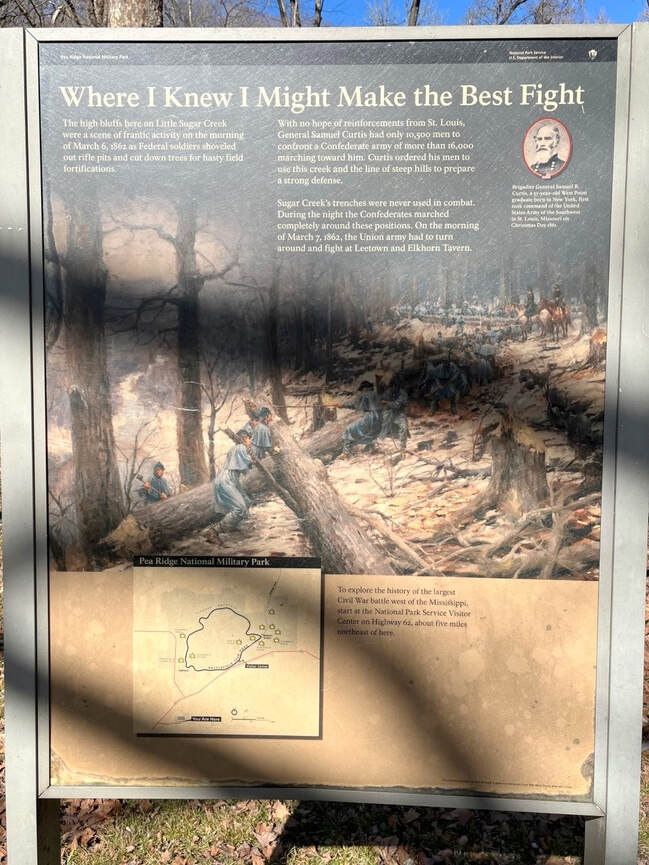 There are no signs that lead to this part of Pea Ridge Military Park. If coming from Rogers it is the first right after you cross Sugar Creek. Above is the sign at the trailhead before you start your hike.