Old High School - An Architectural Landmark
By J. Dickson Black
The Benton County Democrat,  November 5, 1975 , now the NWA Democrat Gazette
The county newspapers printed very little school news in the late 1920's so it was difficult to put together this article on the structure that is now Bentonville's oldest school building. At the time it was built. it housed all 12 grades plus what offices were needed.

The other Bentonville school burned in the spring of 1928. Later that year a new building was started on what is now Northwest Second Street.

From the Benton County Democrat of Sept. 27, 1928: "Superintendent D.M. Greer said today that school would open Oct. 8th at the following places: the Royal Theatre, Christian Church, Baptist Church, M. E. Church South, and the Nazarene Church. Classes will be listed later." But I could never find a list in the paper of who went where.

Another article in the same paper said; "Ideal weather and the arrival of needed material has hastened construction on the new $110,000 school building." It went on to say that. "Brick masons have completed their work on the east and west wings and are now finishing the central section of the building. Carpenters have finished putting up the rafters and are now covering them with shiplap sheeting for the roof. Over this will go two layers of roofing felt and then the tile roof. 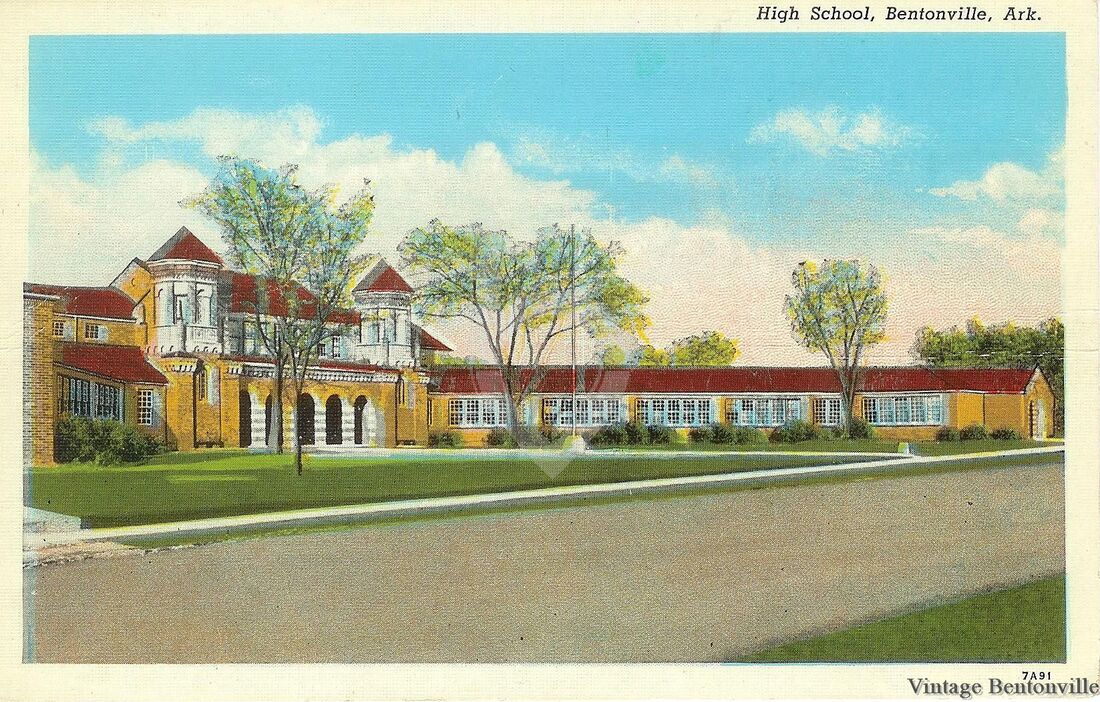 "Over in the east wing a force of cement workers are pouring cement for the sub-flooring.

"By the amount of material on the ground one would think the completion of the building was a long way off. But with fifty or sixty men at work, this will rapidly disappear."

From the Benton County Democrat Feb. 21, 1929: "Wiring the new school building for the electric clock to be installed is going on this week under the supervision of Stripe Boling, city electrician. "

"It will require approximately 16,000 feet of copper wiring and 500 feet of conduit for the job.

"This program clock and its attachments are a gift from the local School Improvement Association (SIA) and one to be proud of. The clock system cost about $575 and wiring and installation about $275 more. The master clock will be placed in superintendent Greer's office. The system includes a buzzer for each of the 22 classrooms and two gongs placed in each of the wings. It will require almost a month to install the system."
On April 9, 1929, the big story came out:  "After a delay of six months the Bentonville $110,000O school building is done.

"The high school pupils moved into their rooms on Tuesday and the grades the next day. Now they just have to get used to them."

So said the paper of that day. Both pupils and teachers were glad to move after having spent months of holding classes all over town.

"On Monday evening April 15, the ladies of the SIA and the School Board will hold a house warming in the new building. No admission wil be charged but a free will offering is asked. Refreshments will be served for which a slight charge will be made.

"Prof. John 's orchestra of Siloam Springs will furnish the music. The SIA has undertaken to furnish the stage settings, scenery and curtains. These will cost about $1,200."

The paper ran a short article on the cost of the building on April 18:

This is one of the most classic buildings left in Benton County, and there is only one other building like it in the state. It should be taken care of and kept just as it is, and in years to come it will be one of the outstanding landmarks in the county. After serving many recent years as Bentonville's high school, it is now the middle school, housing grades six, seven, and eight.