Park in City Square a Beauty Spot Since 1880 - More So Today
Article is probably from the Benton County Democrat, now the NWA Democrat Gazette, from about 1954
Ever wish you could just get away from it all - but like a lot of people, if it only costs a nickel to leave town, you couldn't afford to walk out the back door? If so, take heart.

There is still one place in town that is quiet and cool, serene and beautiful, and it s all for free. That place is the city square.

​Next time you pass by, stop and rest a moment under the majestic elm and maple trees, and feast your eyes on the flowers planted at the base of the Civil War monument by the Bentonville Garden club. And while you're there, here are some facts to think about that perhaps you didn't know:

About 74 years ago [at the original writing of this story], several of Bentonville's business and professional men declared a holiday, went to the banks of Sugar Creek (which was no small trip in those days), and brought back 25 elm and maple trees, which they planted on the square. The 15 or 16 remaining are of the original group. 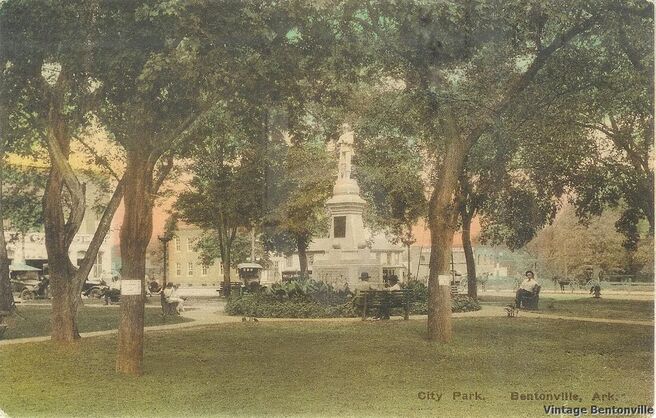 City Park as it appeared in the 1920s. The trees shown in the photo are probably those planted by the early settlers of Bentonville.
​It would be interesting to know if any of those trees are still on the square.
Many names of the men we have to thank for the trees are familiar to the older people of Bentonville. Among them were Dr. John Smartt, Col. W. A. Terry, Dr. T. A. Watson, S. D. McReynolds, James H. Berry, J. H. McClinton, T. T. Blake, E. P. Watson, A. W. Dinsmore, Dr. C. D. Taliaferro, James T. Craig, J. A. Rice, John Black, Judge Samuel N. Elliott, James Haney, Dr. T. W. Hurley, George W. Jackson, E. J. Dickson, Edgar H. Looney and Col. Sam W. Peel.
​
At that time, in 1880, stock was watered from a well located in the center of the square. But after the trees were planted, a chain was put around the area, and stock had to drink elsewhere. 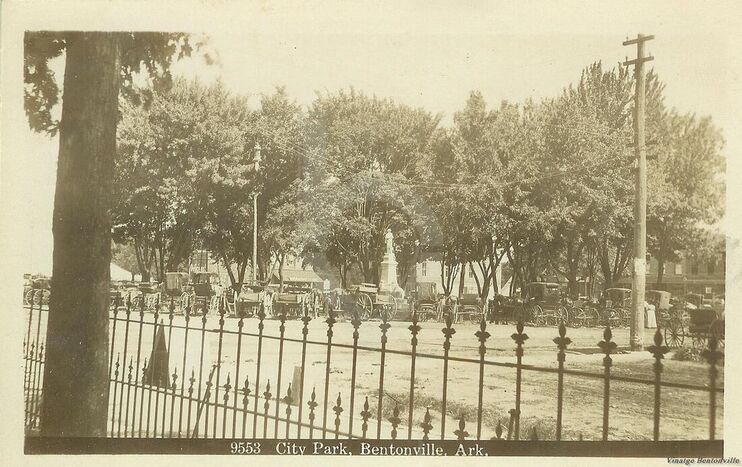 This is what the square looked like around 1910 with all the mature trees planted years earlier.
Through the years other trees, dogwoods and cedars, were added, and grass was planted. In 1908, the statue of a confederate soldier was erected by the James H. Berry chapter of the Daughters of the Confederacy and later the park itself was deeded to that organization.

Mrs. Elliott Berry, the last active president of the local chapter of the Daughters of the Confederacy, is still living in Bentonville.

In recent years, the Bentonville Garden club has been responsible for the beautification and landscaping of the grounds. Its program is a long range one, with members arranging plantings to provide flowers throughout the growing season in a brilliant array of colors. 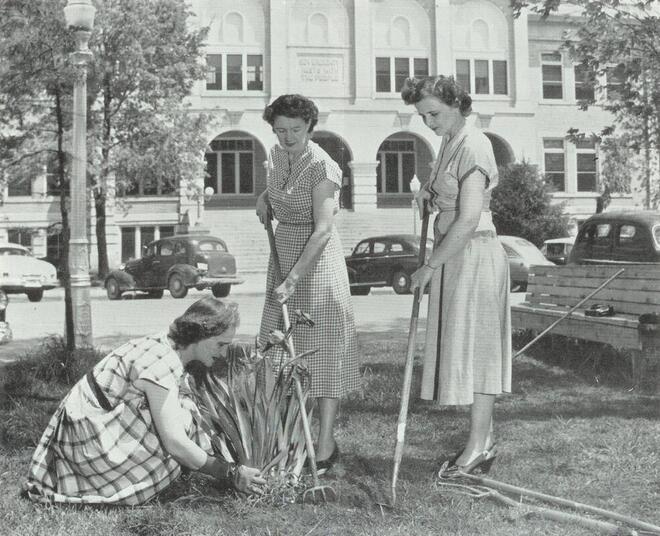 Ladies of the Garden Club working on planting flowers on the Bentonville Square in 1950
Mayor Alvin Seamster, members of the city council amd city employees are also active in caring for the flowers, providing needed soil and fertilizer, and keeping the park attractive.

Next time you're rushing across the city square, stop and rest a moment. You'll feel better.