Pea Ridge Recognizes Both  the Blue and Gray

Pea Ridge Recognizes Both the Blue and Gray
By Billie Jines
Pea Ridge, June 20, 1959 - This northwest Arkansas town has figured out a way to have the North and the South meet at every corner.

Actually, the North and the South (armies) met near Pea Ridge during the War Between the States in a decisive battle for the North that has often been referred to as the most important battle west of the Mississippi. That is what inspired the project.

When Pea Ridge Home Demonstration Club decided that the streets of its town (whose post office [was] 109 years old) should be named, a committee was formed by Mrs. Eva Green and Mrs. Martha Mueller, club members, and Hugh Webb of the City Council to choose names of officers who participated in both sides during the Battle of Pea Ridge. They invited Alvin Seamster of nearby Garfield to serve in an advisory capacity, recognizing him as an authority on the battle.

It was agreed that the streets running north and south should be reserved for the names of northern officers. Heading the list is Curtis Street, the section of SH 94 which divides the town. This street honors the commanding general, Samuel R. Curtis.

The next street east is Davis Street, names for Col. Jefferson C. Davis. It seems likely that this street will invite the most queries for it is named for a northerner, who was in no way related to the president of the Confederacy by the same name.

The committee had a motive in its decision to use the east - west streets for the names of Confederate officers: There are more streets running east to west. And there are more residents of Pea Ridge, whose forebears were on the side of the Confederacy during the war. Three of these streets honor the three Confederate generals killed in the Battle of Pea Ridge: William Y. Slack, Ben McCulloch and James McIntosh.

Other generals, or officers who became generals before the close of the war, also were honored, but the commanding general, Earl Van Dorn, was not one of these. Watie Street was named for Stand Watie, a colonel at the time of the battle, but who was to become the only Indian to be made brigadier general during the war. Other generals were Martin E. Green, Albert Pike, and Sterling Price.

Some names were especially selected in order to include local men. Pickens Road, for instance, honors two brothers whose old homes still stand on that road.

The home of R. A. Pickens is located near the center of town. He had joined the 15th Arkansas infantry at the age of 16, but the name was chosen in honor of his brother, Capt. Cyrus L. Pickens. The Cyrus Pickens home has been purchased by two city officials, who are holding it until the town can arrange to buy it for use as a municipal museum.

Patton Street was named for a local man who was not even enlisted at the time of the battle, which was fought upon the land where he was living. He hid out on a mountain top and watched the battle, but went later to join the side of the Confederacy.

Others in the Confederate group include: Stone and Hayes streets, Lane Drive and Clark Street.
​
A big sign on Pickens Road describes Pea Ridge as the biggest little city in Arkansas and the locals folks proudly point out that 18 new houses were built there last year. 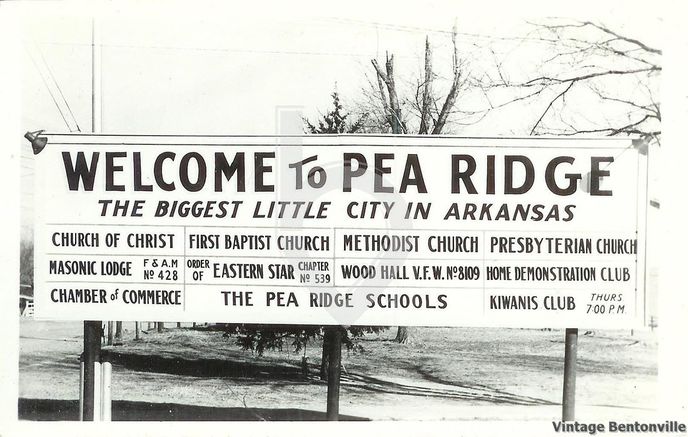 Pea Ridge, though, remains a picturesque spot with its quiet streets that make a visitor expect to see Tom Sawyer tricking his pals into painting a fence.

But should the town one day completely abandon this serene picture and attain more streets and roads, it has filed away a long list of other officers, from both the northern and the southern armies, to use for streets names.