Dave Peel Remembers
by Donna Rakestraw
Reprinted from an article in the Benton County Pioneer, Winter 1979.
Originally published in the Benton County Democrat, September 7, 1977,
​by permission from the Northwest Arkansas Democrat -Gazette.
He's 87 [as of 1977], a lawyer, the youngest of three boys, comes from a longtime prominent family, was born and raised in Bentonville, and is the oldest member of the Arkansas Bar Association in north Arkansas. His name is David W. Peel.

He is the son of D. W. Peel Sr. who was a prominent Bentonville banker years ago. Dave's grandfather Samuel W. Peel moved to Bentonville shortly after the Civil War. He was an attorney and was elected in 1855 to the U. S. House of Representatives. He lived in the old brick two story house located on Highway 71 bypass. His great-grandfather Alfred B. Greenwood, a lawyer who moved to Bentonville in 1838 when the town population was 30, lived in the white two story house that has pillars and is set in a yard and hidden by trees off east Central Street. They are two of the oldest houses in town.

Greenwood also served in Congress. He was elected in the 1850's during Buchannan's administration. He was later appointed Commissioner of Indian Affairs. Probably his greatest achievement was the establishment of the small town of Greenwood located south of Fort Smith.

Dave was born Jan. 4, 1891. He has lived all of his life here except for four years while in Little Rock organizing and serving on a state commission now called The Workers Compensation Commission.

During Dave's stay in Little Rock, he was elected Bentonville mayor twice. He came home every week for council meetings. In 1932, he was first elected mayor of Bentonville as well as chairman of the school board. He served as Mayor until 1943. He served on the welfare board for many years, and is credited with the founding of the American Legion Club in Bentonville in 1919 and the Rotary Club.

A decorated veteran of the First World War, he signed up to serve in World War II, but they told him he was too old and had too many disabilities.

Dave is a 1907 Bentonville High School graduate. He attended the University of Arkansas in Fayetteville for a year and became interested in law. There were few law schools back then. The closest was in Virginia, but few could afford to attend law school.

Peel recalled that aspiring lawyers just worked in law offices, read law case books borrowed from law office libraries, and spend a lot of their time with attorneys. They attended every court session to learn the legal processes and technicalities.

Peel was an avid John F. Kennedy fan. He only met the man once, but received Christmas cards yearly. He is a staunch democrat and was head of the Democratic Committee in Benton County during the years 1923-1965.

Money, or lack thereof, was the biggest problem of Dave's administration as Bentonville mayor. "People couldn't afford their own provisions, much less pay their taxes, so the city had virtually no money to operate on," he said.

During his first term, the city and the school were far into debt. At this time, Bentonville government had only three departments: street, electrical and sewer. Three men operated one truck paved the city's streets with asphalt and cut back weeds during the fall to prevent fires.

Two men manned the electrical plant. One man was a day operator and the others worked at night. Two additional outside men were installers and linemen. The sewage plant was maintained by one man.

"How we manage to do all the things necessary for these three departments with no money, I can't tell you, but we just did. When my last term ended, the town didn't owe a single cent on a debt; the city even had money in the bank, not much, but at least there was some in the bank," Peel recalled. 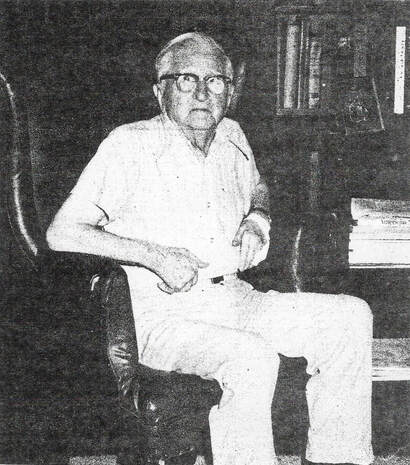 Former Bentonville Mayor and Attorney Dave Peel
​
When asked his opinions of grandson Bentonville Mayor Steve Marquess' administration and how he thought Steve handling the mayor's position Dave replied, " I don't try to interfere up there or run it or anything.. Steve knows he can come to me if he wants my suggestions or opinions. I have always been a big believer in the philosophy of city government that you don't have to be the biggest town, but you can be the best."

"Of course, during my mayor term, life was a lot simpler in those days. We had no subdivisions to deal with, no trailer parks, few ordinances and regulations, and not near the legal tape or amount of paper work required to run a city in today's world."

He recalls the only fires at this time were chimney fires, because the street department kept the grass cut back to prevent grass fires. He stated one of the biggest problems that his administration dealt with was the water drainage problem in the south part of town. "After heavy rains, people had to use their boats to get out and until I built a large drainage ditch which helped to alleviate the problem, it was the area receiving the largest amount of complaint and criticism."

Dave keeps current with what's going on in Bentonville these days. He watches local newscasts and reads the local papers. His interest is great enough, that he recently took the time to fill out the Planning Commision questionnaire to voice his opinions on Bentonville issues.

Dave noted the biggest change in Bentonville is in its appearance and population. "I wish it was like it used to be 50 years ago, when the elm trees crossed over Central Street and made it appear as if a natural live tunnel had been formed and people sat on their front porches and talked with neighbors or friends passing by. The pace of life was a lot slower and most of all the town was a lot smaller. "

Dave recalled his grandfather's home vividly. The front yard was 300-400 feet wide and a carriage house was built behind the old stone two story house. The house was characterized by high porches that hid storage bins overflowing with canned food, baskets of fresh fruit, sacks of flour, and dried meats.

The population of Bentonville is almost overwhelming to him. As head of the Benton County Democratic Committee, Dave said he used to know right at 6,000 out of the 8,000 registered voters in the county on a first name basis. Nowadays, I doubt if I know 500 of them," he said.

The war is on his list of "most memorable experiences of life." He can recall the battles, name of soldiers, and officers and every important date. Another memorable experience occurred when he was eight. A traveling Italian came through town with his organ grinder, monkey and dancing bear. The old trainer became ill and required assistance to care for the bear. Dave and a few friends voluntarily exercised the bear, fed him, and revelled in the limelight of having such an unusual temporary pet. The boys could make the bear dance for them, hug them, and bring them instant popularity.

If there is one thing in life Dave totally dislikes, it has got to be picnics. He will not and has never attended a picnic. His dislike stems from front line service in France and eating from  a messkit complete with the traditional picnic with trappings of ants, heat, and rain.

With all the stories Dave knows, it's a pity. Even the ants would listen.