This is a document published by the 18th Congress (1825) concerning Indian Land that had been settled by white settlers prior to this time. Arkansas at one time decided to take land that the United States had been given to the Indians. I feel this document is addressing some of those issues it created. Arkansas had to give back most of the land, but ended up with some land which is now is now Washington, Benton, and part of Crawford County. As with most government documents, it is very hard to understand. If you think it is talking about something else please email us with your opinion.

Of the Committee on the Public Lands, on the Memorial of the General Assembly of the Territory of Arkansas.
---------
January 25, 1825
Read, and laid upon the table.
__________
The Committee on Public Lands, to whom was referred the petition of the General Assembly of the territory of Arkansaw.
Report:
That the petitioners, on account and in consideration of the said territory's being a frontier, and settled (as they say) under circumstances of peculiar hardship, and for the purpose of inducing emigration into said territory, pray that those persons within the territory who have settled on the lands of the United States may have granted to them the right to retain those lands by paying for them the minimum or pre-emption price. The committee are unable to perceive, in reasoning of the legislature of Arkansas, sufficient grounds upon which their claim can be properly founded. Nothing has rendered it probable to the committee, that the history of the settlement of the Arkansas territory will furnish a greater number of cases of hardship and suffering than may be found in the history of every frontier settlement bordered by savages which has been made in other portions of the public domain.

That Arkansas is a frontier territory does not appear a sufficient reason to the committee for granting the prayer of the petition. By the policy heretofore pursued by the Government towards the Indian tribes bordering upon, and contained within, the United States, it is to be presumed that the intention is not ultimately to exterminate that unfortunate race, nor to deprive them of their last hold upon the lands now occupied by them. It is apparent, however, that, if the contiguous white population is encouraged by the Government to expect, that the mere act of settling upon public lands without right or permission, will entitle the settlers to the favorable consideration of the Government, neither the rights of the United States nor those of the Indians will be respected. The Government has already been compelled, by the unauthorized extension of settlements in this territory, not only to extend the western boundary line of it, but also to treat with the Indians, residing within its limits, at a very considerable expense for the extinguishment of their title to lands therein. It is presumed that, if the frontier settlers respect the rights and abstain from encroaching on the property of their Indian neighbors, that they will seldom be molested by them. The situation of the United States would seem to negative the proposition of the legislature of Arkansas relative to emigrations. The committee are of opinion that it is not the duty of the General Government to adopt special measures calculated to induce the population of the older settlements to emigrate to Arkansas or any other of its territories. All that the Government can be expected to do in this respect, is to adopt wise and just regulations respecting its lands, which will be of general application, and afford reasonable facilities to those who may wish to emigrate for the purpose of bettering their condition and the condition of their families, The rest must be left to individual discretion and enterprize. But, in addition to the above, it will be found, by recurrence to the acts already passed on the subject of pre-emption rights, that Arkansas has, in common with other new states and territories, been liberally provided for: By the Act of April 12th, 1814, persons who had actually inhabited and cultivated lands in Arkansas, and who had not removed from the territory, had pre emption rights secured to them up to that date; and by the act of the last session, May 26th, 1824, those persons who had lands within the tract of country ceded by the United States to the Cherokee nation of Indians, to which the right of pre-emption would have attached, had the ceded territory remained in the possession of the Government of the United States, are authorized to avail themselves of rights of pre-emption within the district of Lawrence, in said territory. Thus, it will be seen, that those persons in the territory in question who, for a period of ten or eleven years, have been locating themselves upon the lands of the United States, without any right or authority, have been quieted by the Government, notwithstanding they have, doubtless seized upon many of the best tracts of land in said territory. The committee are of opinion that the indulgence has been sufficiently extended; they, therefore, submit the following resolution:
Resolved, That the prayer of the petition ought not be granted. 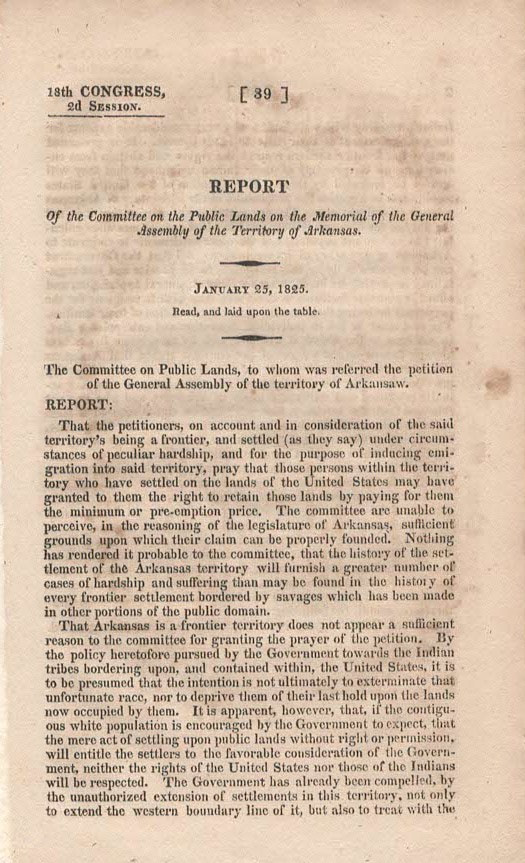 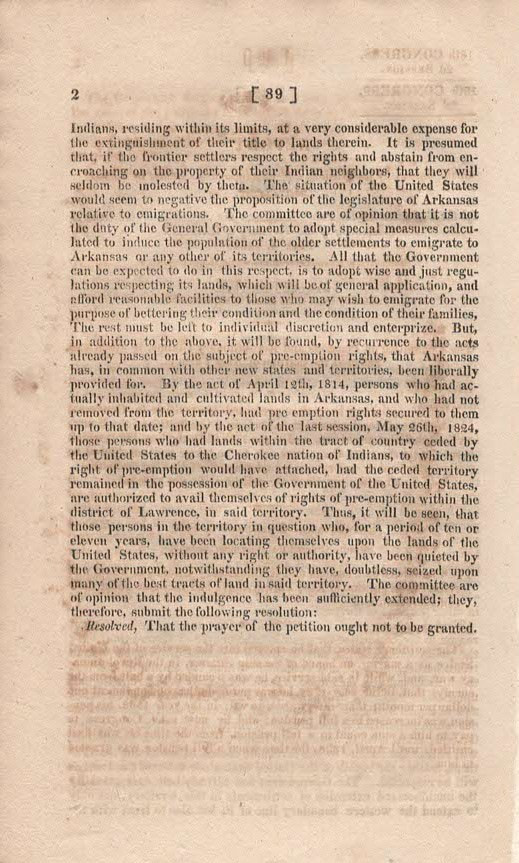