Railroads  In Early Development of Communities

Railroads Had Important Role In Early Development Of Community
By Margaret Grant - From the August 28th, 1956 Rogers Daily News, now NWA Democrat Gazette
As the future of a lifetime is often determined by the flip of a coin, so more than seventy-five years ago, [now 140 years], did the entire future of this community depend upon original surveyor has undoubtedly long since put way his instruments and gone on to greener pastures, but the city of Rogers still goes on to new and greater vistas of success and prosperity on the site which depended upon the decision of railway officials as to the shortest routes between St. Louis and Texas.

Of course there are those who hint that a bonus, or "donation", of $600, paid the the St. Louis and San Francisco Railway by residents of this vicinity, may have had its part in the selection of the townsite, but, be that as it may, the location of Rogers depended on the coming of the railroad.

The route was being chosen for the original main line of the St. Louis and San Francisco Railway location of the town to center around the new roadway, was on the Sikes farm owned by F. F. Sikes, who occupied a log cabin on part of the property which later became the city of Rogers.

The bonus of $600, which was to secure the location of the city hereabouts, was paid by eight men, four of them brothers, N.S. (Nate) Horsley, William B. Horsley, H. B. (Het) Horsley, and Major S. S. Horsley. These men, veterans of the Confederate Army, came originally from Kentucky, settling in Benton County in 1868.

The name of the new town to be in the immediate neighborhood of the railroad was left up to the company. Consequently it was named for Captain C. W, Rogers of New England, general manager of the St. Louis and San Francisco.
​
The first trip of the first train was made May 10, 1881, amid great excitement and varied reactions on the part of the onlookers. 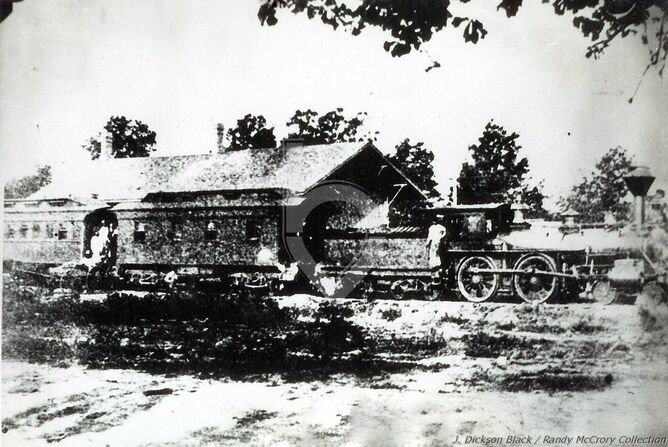 A history-making train - It was the arrival of the above Frisco passenger train on May 10, 1881, that gave Rogers a birthday.
​Old No. 17 was the first to run over new tracks into Rogers. The town began with that trip.
​In those days of the the early [18]80's Rogers was a division point for freight and a makeshift freight station, and a six-stall round house was in use at the south end of the railroad yards, and just west of the tracks. The people of Rogers purchased and donated to the railway a 20-acre tract for a station. As the engines of the division became heavier and the freight hauls became longer, the freight station was no longer needed and the building was torn down. 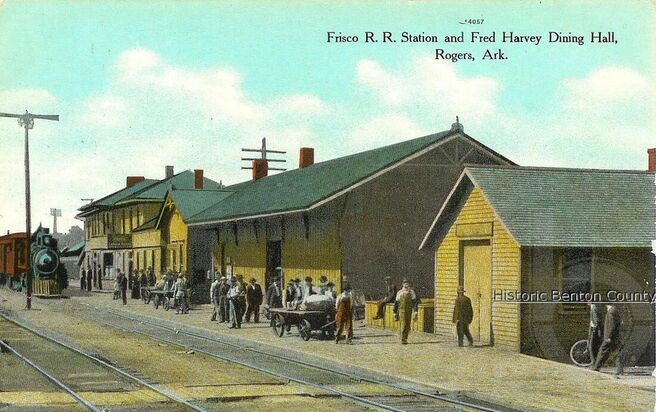 Early image of the Rogers train depot and freight station. The depot also had a restaurant in it.
​This building sat about where the old Frisco stage sat in downtown.
During the [18]90's the part of the right-of-way between First Street and the tracks and between Walnut and Elm was used as tie yard and hundreds of car loads of tie timber were stored there. In fact, railroad ties were a major source of income to the community, bringing more cash to Rogers than any other product. At the close of the 1900 season, the agent at Rogers reported that 500 carloads of ties (100,000) had been shipped brought more than $25,000 to the community.

The tie-yard became a source of irritation and an eyesore to civic-minded people of Rogers. It was used as a parking place for wagons and buggies. Tramps and other vagrants loafed and slept in the shade of the pile of ties, or sought shelter there when cold  winds and rain besieged them.

After a protest from the city council and a group of business men officials of the railroad had the ground cleared and turned the strip of land over to the city. Several years later trees were planted there and steps were taken to beautify the grounds. It then became Frisco Park and efforts were made to have bandstands there with benches to accommodate those who wished to hear the band concerts. Many prominent figures in politics and national government made speeches there before the turn of the century. 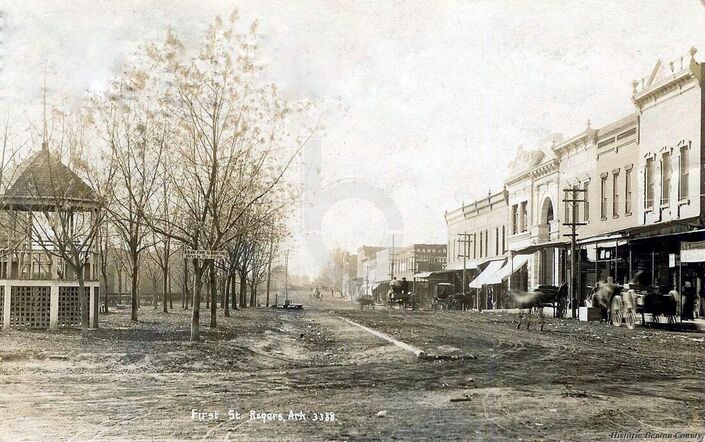 Looking south from the corner of Walnut & 1st in Rogers, Arkansas. This is one of the band stands that sat in Frisco Park back in the early 1900's .The sign on the tree reads "$5 Dollar Fine To Ride Or Drive In The Park".
In 1900, the St. Louis and San Francisco Railway became the "Frisco Line". Later in the year the railroad bought the Arkansas and Oklahoma Railroad, which ran from Rogers to Gravette. During the same year F. K. Weiser succeeded F. M. Richardson as local Frisco agent.

No story of the railroad of Northwest Arkansas would be complete without telling of the accomplishments of one of the pioneer business leaders of Rogers, the late William R. Felker. No early settler played a more prominent part in the business and industrial development of the city than this public-spirited citizen whose ability in organization and financial genius were largely responsible for Benton County's importance in early-day transportation. 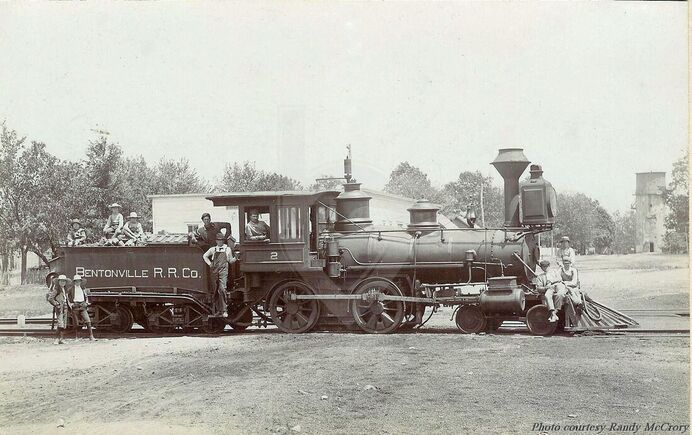 M. F. Hendrick, Engineer, A&O Railroad - July 1902 - Photo was taken in Rogers, Arkansas in the middle of Walnut St. - Notice the old Rogers water tower in the background on the right
Born near Washburn, Mo., on September 22, 1855, William Felker had become a business man of considerable standing by the time he was 26 years old. Coming to Rogers in 1883, two years after founded the first bank here, the Bank of Rogers, which continued in operation for thirty-one years.

His first venture into railroading was was the organization of a company which built a railway between Rogers and Grove, Okla., which later was sold to the Frisco Railroad. A second company headed by Mr. Felker built and operated for a number of years a railroad connecting Rogers, Siloam Springs and Fayetteville. Later the short-line railway built by Col. W. H. (Coin) Harvey between Lowell and Monte Ne was acquired and farseeing financier envisioned a railroad system extending eventually throughout the Ozark Mountain region, an area which has never had railway facilities.

But unfortunately, Mr. Felker could not foresee the death of the timber industry in the region, for the birth of the motor industry which sounded the knell for the short hauls and short trips of railroads. His rail systems had been reorganized several times and were known variously as the Rogers Southwestern, the Arkansas, Oklahoma, and Western, and the Kansas City and Memphis railroads. 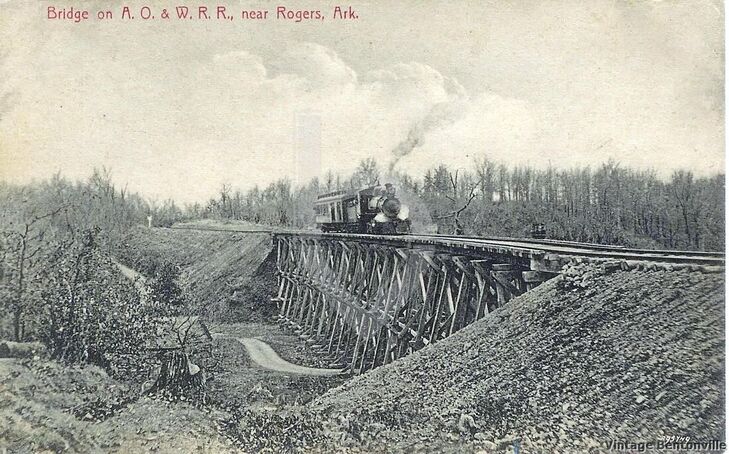 This is an image of the Arkansas, Oklahoma and Western Railroad making its way between Rogers and Siloam Springs
For many years during the first half of the Twentieth century the popular idea of the railroads of Arkansas was conceived from a widely written book, " A Slow Train through Arkansas", the work of Opie Read. This book was and many were the jokes quoted from its pages. A typical anecdote was the one about a man on the train who, thoroughly discouraged and disgusted with life, decided to commit suicide. So he run a little way ahead of the train and lay down on the track so that the train would run over him. Poor chap! He starved to death before the train reached him!

Corny? Yes, but people loved it. So the slowness of Arkansas railroads became a by-word to a whole generation of Americans. Fortunately, "slower than a slow train through Arkansas" means nothing to the present generation and there is no resemblance today between that concept and the swift, stream-lined, comfortable trains which now span the state.