Rare Book Tells Story of Bentonville Academy
by Charlie Craig
​From the Benton County Daily Democrat, April 15, 1990, now the NWA Democrat Gazette
Today's column will be a joy to write. Two things happened recently to bring this about.

First, a good friend, Jesse Barnett, brought me a book and said, "Charlie I have something I want you to see. When you read it we need to decide where it ought to be placed for posterity." [It would be nice to know where this book ended up.]

Secondly, it was the amazing and rare book itself. A handwritten record of the conception, development and establishment of Bentonville College!

In the first paragraph of the recording, it tells of a mass meeting called by the subscribers of the Bentonville College. This was on the evening of March 15, 1884.

Chairman Rice explained the purpose of the meeting, read the proposed articles of the association, and suggested that the name of the new institution be "Bentonville College."

Soon the land was purchased [the property that had been where the county fairgrounds once was and now where Thaden School stands], plans for a three-story stone and brick building, and a contractor, J. N. Haney engaged to construct it. The cost was to be $6,500!!! 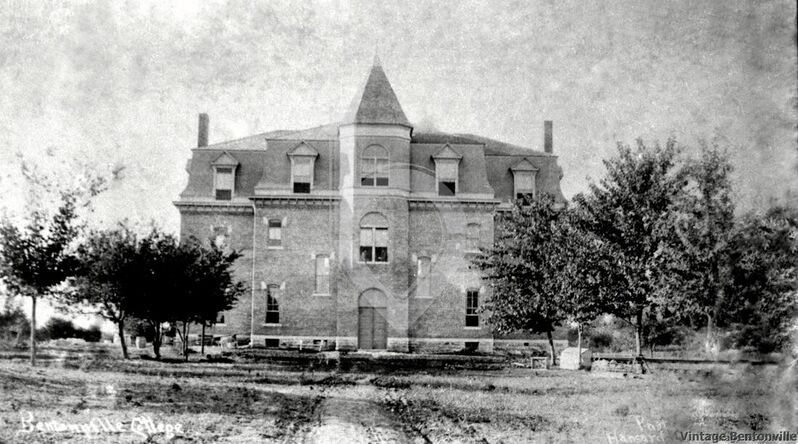 Image of the Bentonville College (Academy) from the late 1890's. This build would have same right in the middle of S. A St. when it was built.
The college was completed in 1885, and operated until about 1900. In its later years it was called the Bentonville Academy.

In 1900 it was leased, with option to buy, to The Ouachita-Central system of Colleges and Academies.

An agreement was reached to build a new dormitory. The plans called for a building to contain an office, kitchen, 20 bedrooms (each to be 12x12 in size) and restrooms.

The building was completed at a cost of $2,610! However, the new operation only lasted two years, and the property was returned to the original owners.

Soon after that the Bentonville School System bought the property and it became and it became the high school. It operated until 1929.

We owe a vote of thanks to Jesse Barnett, and we would appreciate suggestions as to where this fabulous book should reside. [This last line is part of the original article, and since we don't know the whereabouts of the book, we are not asking for suggestions.]