Oral History Participant Recalls Laying of Rogers' Brick Streets
By Virgil Lovelace
In the Rogers Daily News, date unknown (now the NWA Democrat Gazette)
I should tell more about my impression of Rogers. To a small boy living in the country , Rogers was the Rome, Paris, and London. It was a large cosmopolitan city with 3,000 people in 1910-20's. It had the railroad where all trains stopped. Six passenger trains, three north and three south, passed through each day. Also Rogers had an ice plant where we stored apples and got a big chunk of ice to make homemade ice cream. Rogers also had Kefauver and market for selling grain (W. J. Rogers' mill). Winklemans bought blackberries, strawberries and wood to be split and used in the cook and heating stoves. There was no gas nor microwave ovens in those days. Electricity was only used for lighting and that was the only use of the magic of the electric current of 75 years ago.

As Rogers was the hub of the early development of the wonderful capabilities of northwest Arkansas, a railroad from St. Louis, Springfield, Monett then south to Paris connecting the great markets of the midwest to the gulf coast was used. No wonder the population and growth has risen from hacking of ties for the railroad and trying to bring residents of northwest Arkansas to the prominence of the most fortunate of all the people in the world. 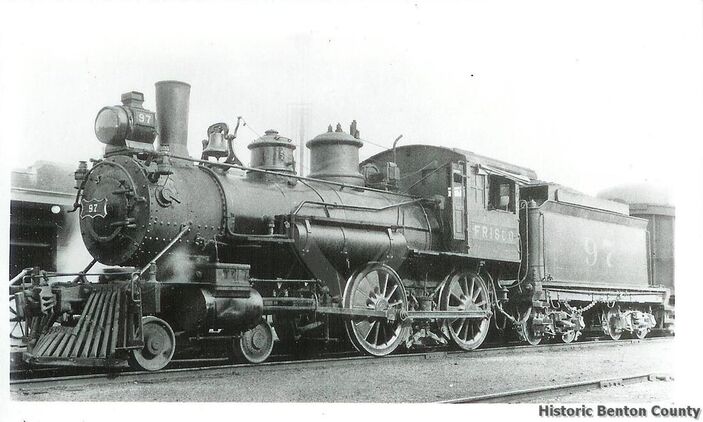 One of the early Frisco engines passing through Rogers
In the late 1910s or early 20s' we had paved streets. I can remember a man who could lay bricks faster than I could count. If one dug down under the present coat of asphalt or concrete they would find the bricks that first paved the streets of Rogers. We kids would almost push a bicycle three miles over the dusty dirt roads to ride on the smooth pavement.

But of course Bentonville was the "King of the County" although less populated than Rogers -- about 1,500 people. It has the County Seat, the Court House and County Sheriff's offices. We all paid homage to Bentonville. We had to go there to pay our taxes and attend court if someone committed a crime, which were few in those days because everyone knew almost everyone else or had heard of them in the whole county. No one could rob a bank and jump in a car ad be a hundred miles away in an hour or two. There were exceptions. One time about 1920, two men rode up to the Bank of Cave Springs, robbed it at gun point, galloped away, cut the fencing on a corn field and disappeared into the hills. To my knowledge they were never caught.

There were other centers of interest in northwest Arkansas too. About every six to ten miles someone would operate a grocery store, and that would be the gathering point for exchange of gossip, talk about the weather, usually on Saturday. Saturday was set aside as a meeting day, so to speak. We all hitched the horses to a wagon, took whatever we had to sell: eggs, cream, vegetables, calves or young pigs and swapped them for whatever we needed. No credit cards were in existence although some of us would borrow money from the bank to buy a new wagon or spray rig, and later a tractor or maybe an electrical plant.

Rogers had two unfortunate bank failures. One about in the 1910or 20's when the bank used the funds to finance a railroad from Rogers southwest thru Cave and Elm Springs on to Oklahoma to connect with the Kansas City Southern. Also it had a branch to go to the resort town founded by the late Coin Harvey, known as Monte Ne. As a young lad, I would board the Fort Smith and Southwestern in Rogers with my sister, Jewell. One morning we boarded the the train to visit our grandmotherand got off at Wheeler near Tontitown. The train stopped in the middle of an apple orchard and the engineer and fireman got off and gathered a half bushel of apples. We got off at Wheeler and walked about a mile to Grandma's. Boy, was that an experience, like flying to London or Paris or the Holy Land today! 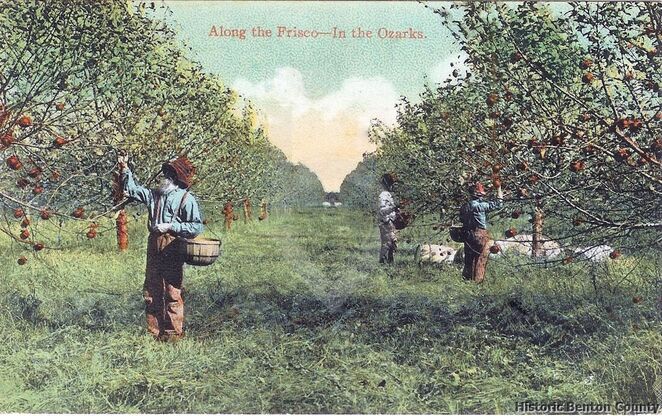 Back in the early 1900's the area was just covered with apple orchards like the image seen above.
More about Rogers in the early teens and twenties, H. L. Stroud had the best clothing store and sold Hort Shaffner and Marx suits for $40, Applegates' Drug Stores for 5 cent cocacola or ice cream cone, the Oscar Juhre Meat Market, the Clint Deason Grocery Store, the Daniels' 5 & 10 Racket Store and also the Greek Ice Cream Store. The Bank of Rogers and the Mutual Aid Society all declared bankruptcy. Dr. Rufus Rice, later Dr. Clyde McNeil, were the prominent medical people. The big industries were the vinegar plant where we sold our cull or inferior apples. That was the only "big stink" in Rogers.

I remember World War I and our participation in the War Bonds that were sold to finance the government. Many celebrities of that day came in by train to promote sales. Sophie Tucker, Eddie Cantor and the early day stage and national heros came. There were no screen or televison stars such as Jerry Lewis to produce telethons. At the great celebration of the ending of World War I on Nov. 11, 1918 there were gunshots, blasting of anvils and dancing in the streets to end the war that would end all wars. The Kaiser was defeated.

May I close by saying: If only we as humans and being inhabitants of a Country, did not envy what others have and resort to violence to get it, we could be content with what we have and give our blessing to God for allowing us to be on His Earth. As the song goes, "Enjoy yourself. It's later than you think."