Reflections  of Life in Bentonville

Reflections by Ruth Barker
From The Benton County Democrat - February 24, 1971 - Now the NWA Democrat Gazette
There would be no way for me to write a column half as interesting as a letter I received from Mary Berry Preston last week. I hope Mary doesn't mind, because I want to share it with all of you. Here it is:

Dear Ruth:
Mother and I both enjoy the column you do for the Democrat. We have thought several times we would tell you so..... today I really am. I know about the "man in the park" if you are talking about the Confederate monument in the square.

​It was dedicated by the James H. Berry Chapter, United Daughters of Confederacy and I have all the details which I will bring up to you real soon......it seem strange that Red Cavness might even think he is the least bit old...perhaps it is because I can remember almost everything, about Bentonville so vividly, at least until I moved away --

I don't remember much about the Horse-Shoe Cafe but I do remember that a quart of chili in a round ice-cream carton in cold weather -- ready to "go" -- from the cafe on South Main street was the best in the world. You got change back from a dollar.

I bought it every Saturday night in the winter and it stayed hot until I walked home with it... to heat the crackers for supper...My father liked it so well he was sure it could not hurt an ulcer diet. I think he worried and regretted "Red" Cavness' loss of money in the bank failure more than anyone because the chili was so good.

Summers in Bentonville were just great for the children who lived on West Twelfth Street [now Central]. Leta Bryan had a touring car that would hold us all, and she took us daily to Ne-log-ney-Glenn, which was a pool owned by Charlie or Tom Haney at Kidney Springs. Kidney Springs was near Park Springs, but we liked it much better. 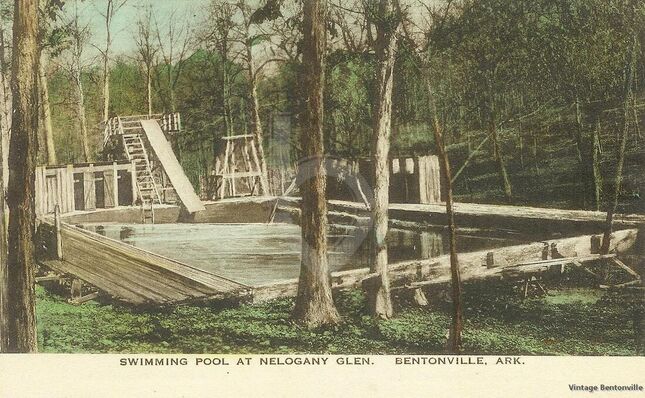 Sometimes we did go hunt crawdads at Park Springs, down where the water piped in the side of the mountain. But Ed Craig (Joe and Elizabeth Ann's father) was our swimming teacher at Kidney Springs, and he had us all in at once.

He was the only adult I ever remember actually being in the water. The cedar siding dressing rooms down there were something else. But there was a slide and no one ever seemed to worry about the lizards, or getting hurt, or time, or anything. Yes, Kidney Springs was the place to be... later when I was in high school the big Bella Vista pool was built, and as much as I loved Bella Vista in the summer time, it never was like Charley Haney's pool.

I am sure there are many people up there still who would remember about the "Interurban". I am also sure it didn't last long, and was popular about the time of my birth. I have copies of the Bentonville Daily Sun, the paper that recorded my birth. It was owned by Mr. H. L. Cross.

I think it was fantastic that the Bentonville of those days had this track and "car" to Rogers, built at a cost of $22,000. The chamber of commerce took one hundred people to Rogers on its first trip, along with the Bentonville band, and the crack Bentonville ball team. 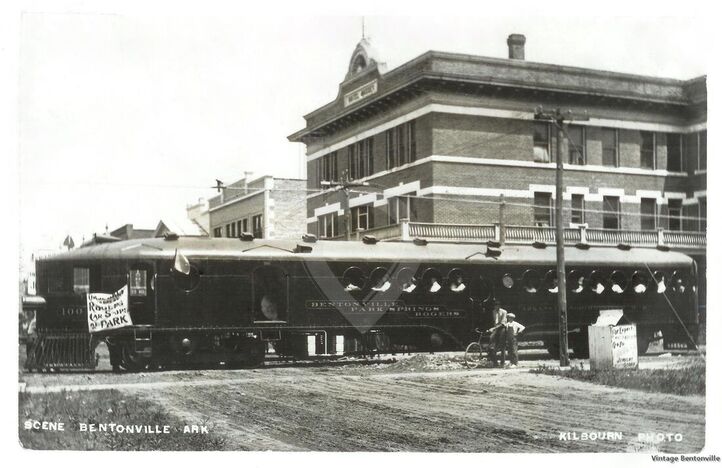 An image of the Interurban sitting beside the Massey Hotel in Bentonville
The papers made news items out of peoples trips to Rogers to ride it. Besides Kit Campbells barber shop there was also an Interurban Barber shop, with shaving at ten cents and haircuts at twenty-five cents. Some of the other businesses there were, Haxtons Drug Store, Ray D, Keith Grocery, Bentonville Cash Store, J. C. Knott Groceries, Benton County Hardware Co., Beck Tailoring Co., Jacksons Dry Goods Co. and of course, the Royal.

Besides the two part serial playing, they had a five piece orchestra too. The Benton County National Bank had a capital and surplus of $489,550.32 and the First National with D. W. Peel cashier, had 478,988.55. J.C McAndrew was President of the Benton County Bank.

Another thing of great interest in early Bentonville was the annual arrival of the Chautauqua. My aunt Gin was married to Mr. A. P. Smartt, who was secretary of this enterprise for the city. It came in late summer for six glorious days.

I feel like it was in a tent, near the old courthouse, which was about where Phillips grocery is now. Its advertisements said it would "help forget your worries", would act as a "tonic to the system", and be a "change from the daily grind". I really do remember going. Perhaps it was the Hila Morgan shows I saw. They sold candy in boxes that had prizes, or were supposed to have.

I remember my keen disappointment when no one got a pink center or what ever you needed for the pair of real silk stockings. It was sold between all acts. 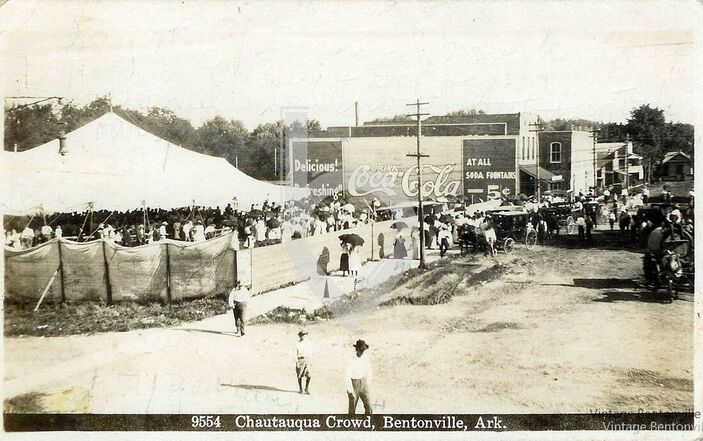 This is what a Chautauqua looked like in Bentonville around this time. This tent was located where our courthouse sits today.
My Aunt Bert (Mrs. O. E. Lefors), took me for I don't believe my family attended. She liked to drink ice-cream sodas afterwards at Tisdales soda fountain, later at Applegates.

Ruth, I know you are worn out, sorry. Mother had her 91st birthday last Monday, Feb 8. This year, for the first time, the weather was too bad to get out, so we celebrated with a cake served to all the residents at Methodist.

Mrs. Biatha Morrison, who has been there for several years has just moved to Tulsa to live in the new Oral Roberts Retirement home. She will certainly be missed.

Give our regards to Bill. You all do have a good time. The tailgate picnics inspire me every fall to better than just fried chicken.
​
Fondly,
​Mary Berry Preston