J. Wade Sikes
Rev. J. (James) Wade Sikes, better known as "Uncle Wade" was the third child born to the marriage of Robert Sikes and Elizabeth Bledsoe. He was born in Perry County, Alabama October 2nd, 1828. His mother died in Alabama when he was eight years old. After her death the family moved to Bedford County, Tennessee then on to Arkansas in 1854, locating on land where Rogers now sits. Mr. Sikes was 25 years old when he arrived in Arkansas. He was united in marriage on December 25, 1854 to Miss Almyra I. Lee a native of Missouri. Mr. Sikes received a common school education but most of his education was learned through self-application. He taught school in Tennessee and after moving to Arkansas he taught a script school in the old Jefferson School house a mile and a half from Bentonville. He then taught for a time at Shelton Academy at Pea Ridge. But soon gave than up to become a farmer.

The Civil War disrupted all occupations at that time and he left farming to enter the Confederate Army. He served for four year and served as a orderly sergeant Co. D. Second Arkansas Mounted Riflemen, during the battles of Wilson Creek, and Pea Ridge. Mr. Sikes was subsequently  to the rank of lieutenant, and later During this time he started to preach the gospel to his fellow soldiers. Whenever a camp was pitched Lt. Sikes would be having an pray meeting, and whenever they had a long stop he made preparations to hold a revival. He made sure everyone in the whole command was supplied with a bible. Later he was transferred to an eastern regiment where he lost his left arm in the battle of Atlanta, Georgia. 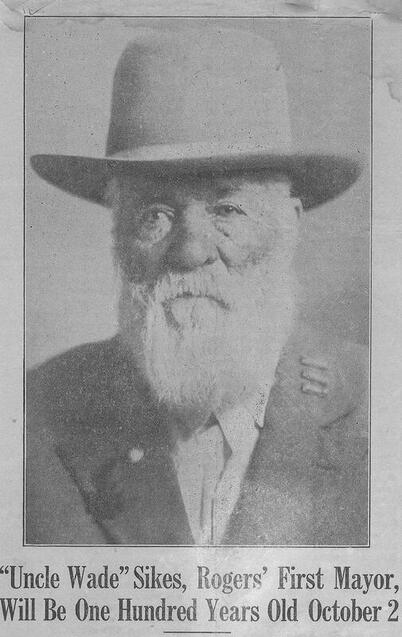 Image from the October 2, 1928, newspaper celebrating the 100th birthday of "Uncle Wade" Sikes
When J. Wade Sikes returned from the war, he served as a deputy, then he was elected clerk and recorder for Benton County in December 1865 and retired from it when, in 1868, the period of reconstruction displaced him. After that he engaged in practiced law and farming. It was announced that the Frisco Railroad was coming through on land owned by the Sikes family. The main townsite was located on the property of his brother B. F. Sikes, the brother of "Uncle Wade". The property just to the south of the original city site belonged to J. Wade Sikes. It was in 1881--the year Rogers became incorporated as a town, and its first mayor was J. Wade Sikes. He also platted the J. Wade Sikes addition in Rogers. Apparently there was some disagreement between the two brothers how the streets were to be laid out, so they both made the streets the way they saw fit. That is why the streets jog at Cherry St. and 5th St.. Uncle Wade lived lived for many years west of Rogers about halfway between Rogers and Bentonville. He would walk to one town or the other once a day, summer or winter. He could be seen visiting with friends in Frisco Park many days, weather permitting. 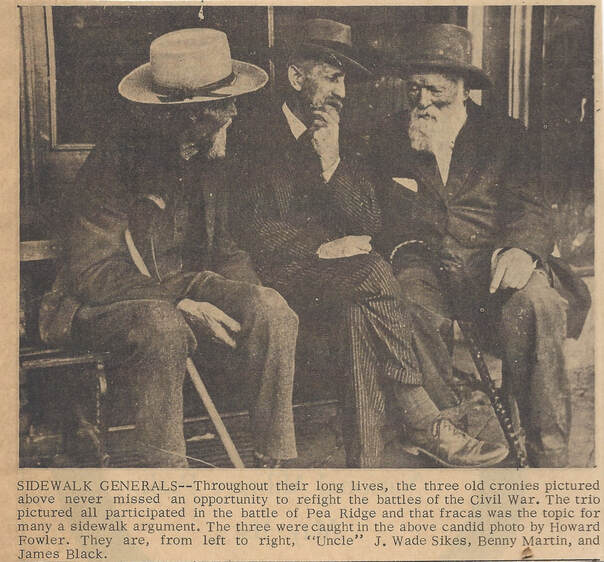 "Uncle Wade" started preaching when in the military and continued to serve as a minister most of his life.  He served  until failing health made him give up his regular appointment. He preached the doctrines of the Baptist Church and his labors in the cause of Christianity have met with gratifying success. He even donated the land for the Baptist Church in Rogers. He delivered his last sermon on his 98 birthday.

​Sikes rarely missed a meeting of the Confederate veterans. He was also a member of the Blue Gray Legion. He was a  charter member of the Benton County Fox Hunters of which he was a member for 36 years. In later years, he had the honor of being the oldest hunter in the whole Southwest. He continued to ride behind the hound until her was ninety nine years old. No meeting was complete unless "Uncle Wade" was able to spend a few hours around camp. He would no sooner think of missing a hunt than he would a reunion of  the United Confederate Veterans.

Rev. Sikes was always for trying to keep Benton County dry every two years when it came up for a vote. He was a moving force in the county to keep it dry. Many times the outcome in Benton County was a small margin. One year there was only a four vote difference, and another time, just six votes. Well informed authorities of those years conceded that it was the personal fight by "Uncle Wade" before the election commission, and his influence with the county judge that kept Benton County dry. All who were in the fight in those days will place at least four dry years to his credit.

The last local fight that interested him greatly was that county road bonds around 1920, which he was bitterly opposed to. When the suit finally reached the supreme court of Arkansas, "Uncle Wade" went to Little Rock to plea his own case in person. He was 92 years old, and although he lost his suit, all who heard him were amazed at his ability to express himself logically and forcibly. After his loss, it dampened "Uncle Wade's" outlook for the future of Benton County, and he made few public appearances after that.

On his 100th birthday, the Twelve Corners church north of Pea Ridge which at which he had served held a special memorial service to celebrate his birthday. A community dinner was held after the service on the lawn of the church and it was a reunion of all the older citizens of that section of the county. He was also honored at the First Methodist Church in Rogers. Later in the evening a special service honored him at the Baptist Church. A special choir of 100 voices sang songs and hymns picked by Mr. Sikes. Many men spoke of  "Uncle Wade's" accomplishments in his life. He spoke a few words at each service but his friends kept a close eye on him to make sure he didn't become overtaxed.

"Uncle Wade" was always a rather fiery old man, and more than once shook his cane in the face of some opponent.

Rev. J. Wade Sikes passed away on January 7, 1929, just over three months after his 100th birthday. He was buried in the Dodson Cemetery which at the time was in the country southwest of Bentonville. Today the cemetery falls well within the city limits. J. Wade Sikes outlived all of his descendants, his only grandson dying just days before the celebration of his 100th birthday.