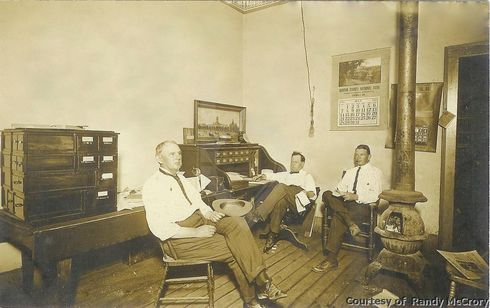 Man in the chair on the left is Charles M. Rice - Lawyer - Bentonville, Arkansas - July 1912 - Office may have been located at 106 W. Central
​Charles Matlock Rice – Was a member of one of the pioneer families of Arkansas, and had long occupied a position of prominence at the bar of Bentonville and has served as mayor of the town. He was born in McMinn County, Tennessee, September 5, 1859, a son of Charles W. and Julia A. (Cobb) Rice, who were also natives of the state. They were married in Tennessee and in 1859 came to Arkansas, locating at Pea Ridge. The father became the owner of a large farm in that section, on which he and his wife spent their remaining years. They were members of the Methodist Episcopal Church. He was a democrat in his political view and in the early days served as circuit clerk of Benton County. He was a widely known and highly esteemed resident of the community, being numbered with the pioneer settlers of the state.

In the acquirement of an education C.M. Rice attended the schools of Benton County, after which he became a student in the State University of Michigan at Ann Arbor, and from which he graduated with the class of 1886 on completion of the law course. Returning to Arkansas, he opened an office in Bentonville in 1887 and here was since engaged in professional work, his ability being attested in large clientage accorded him. He was admitted to practice in all the courts and served as president of the examining board of the supreme court of the state. In a profession where advancement depends upon individual merit and ability he  gradually worked his way upward, his success coming to him because of his close reasoning , his logical argument, his correct application of legal principles and his ability to present his content in the strongest possible light.

In 1885, Mr. Rice was married to Miss Martha Ragan, who was born near Petersburg, Illinois. Her parents, Mr. and Mrs. John Ragan, were natives of Virginia and in the 1870’s they became residents of Arkansas, and died in Benton County. Her paternal grandfather, John H. Ragan, lived to a very advanced age, being one hundred and four years old at the time of his demise. Mr. and Mrs. Rice became the parents of five children.

The Rices were members of the Baptist Church and fraternally Mr. Rice was identified with the Masons, holding membership in the lodge. He was a stanch Democrat in his political view and took active interest in the welfare and success of the party but was never  an aspirant for public office, although he was called upon to serve as mayor of Bentonville and also as president of the school board, making a most creditable record in both connections. He had always been loyal to any trust reposed in him and put forth every possible effort for the benefit and upbuilding of his community, county, and state, doing effective service for the public good, while in his law practice whatever he did was for the best interests of his clients and for the honor of the profession. 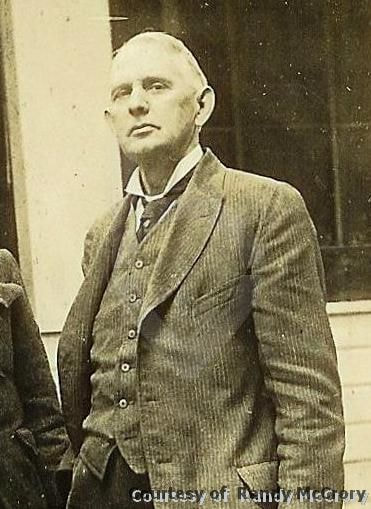