Below is an account of a store that was robbed by whom many believe to be the James-Younger Gang. The below account came from the Bentonville Advance, right after the robbery which occured on February 11, 1897.

A robbery, daring beyond precedent, was perpetrated last Wednesday night, at Craig & Son's store. Charley Craig and Charley Clark sleep at this store. It was 8 o'clock at night at night; the drug store, next door, only separated by a board partition, was at the time filled with men. The two young men were sitting by the stove, cooking some eggs, when the door opened and two men entered and took seats by them. This was of so common ocurrence that it did not worry either of the boys. Directly the door opened again and in stepped two more men; as they entered the store the two who were sitting by the boys, quick as lightning put their pistols to the heads of them both, threatening their lives if they made a move or uttered a word. A third kept guard at the door, while the fourth ransacked the store, doing the stealing. He literally 'went through' the establishment, taking all the money he could find. He took a suit of clothes, the very best in the store, for each of the party, ordered Charley Clark to pull off his boots, and discovering that they did not fit him, ordered Charley Craig to do the same, and being suited appropriated them, and left the young man bootless. 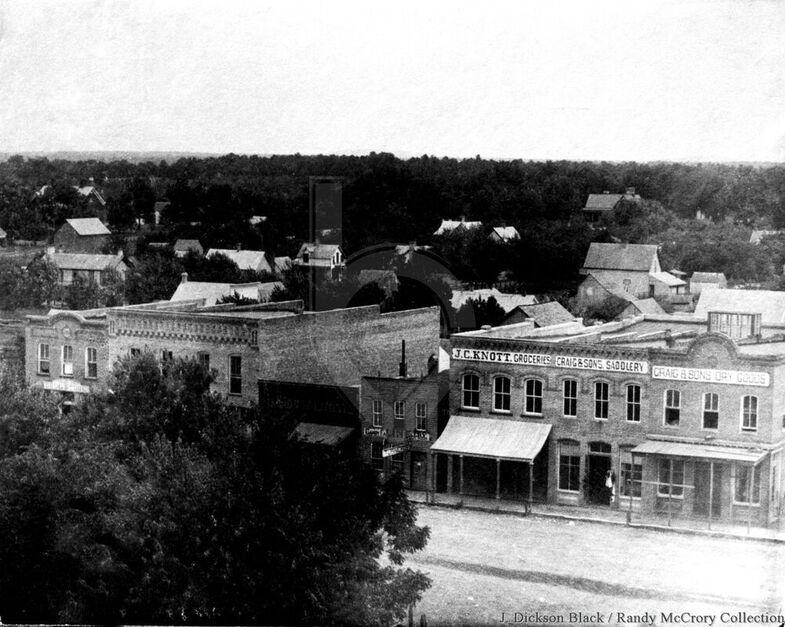 The image you are looking at is the south side of the Bentonville Sqare from around the 1880's. You can see the Craig & Sons store located on the right corner of this block.
The boys had to give up their gold shirt-buttons and permit themselves to be searched for other valuables. After they had stolen all they wanted, they tied the boys and made their way to the street. The affair was made known immediately, and quite a number of our citizens went in pursuit. So ended one of the boldest robberies ever perpetrated in this part of the state.